Explain one play: How the Chicago Sky shut down the Las Vegas Aces

History was made on Tuesday night.

The Las Vegas Aces and Chicago Sky faced off in a star-studded affair, though it didn't seem that way after the first quarter.

The Aces didn't just blitz the Sky in the opening frame; they reached a level that has rarely been seen in WNBA history. They converted 7-of-11 shots inside the arc and 7-of-11 shots from deep en route to a franchise-record 41 points.

Their active defense allowed them to run in transition — a formula head coach Becky Hammon and her players have subscribed to throughout this season. But, they also carved the Sky up in the half-court.

The Sky are renowned for their aggressive defense, consistently asking their bigs to venture out to the level of ball-screens (or higher) whenever they want to all-out trap a ball handler. In their first meeting, it took a quarter or so for the Aces to get going. On Tuesday night, they sliced up the defense pretty early. Like, opening-possession-of-the-game early.

The Aces open up with a high ball-screen to test out the Sky's defense, but not without some manuevering first. Kelsey Plum sets a Ram screen on Candace Parker — a popular gambit used to get the defense shifting. After the screen, Chelsea Gray and Dearica Hamby hook up for a high connection. 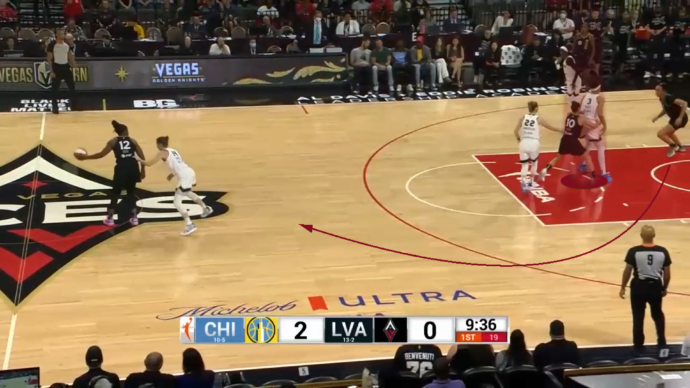 Parker ventures out to the level of the screen, which opens up a pocket pass for Hamby as she rumbles downhill. With Plum relocating to the right corner, and A'ja Wilson in position to screen for her, Emma Meesseman isn't comfortable rotating all the way over to halt the Hamby drive.

It wasn't always that easy for the Aces in the half-court, but the Sky did give them openings to attack just about every time down. Sending two to the ball inherently allows an offense to play advantage basketball if they move the ball well enough. The Aces don't have much issue moving the ball, especially when they're humming like they were in the first quarter.

In the second half, the Sky dialed it down some in spurts. They didn't completely go away from their base, but they threw in some minor alterations. One that really stood out: Having their big defender play a step lower below the screen, and opting to late-switch or peel-switch the action. It was a way to balance taking away easy pull-ups, but also not allowing the same rolls to carve up the back end of the play.

That minor tweak took away some of the automatic looks the Aces were getting in the half-court. They didn't generate the same paint touches, which eliminated some of the easier drive-and-kick opportunities they saw in the first half. That, in turn, led to some late-clock ugliness and some rushed shots as the Sky mounted their historic comeback.

If there's a possession to highlight from the Sky defensively, it would be this one:

You can't see it — curse the camera work on this possession! — but the Aces are running the same set they used to open up the game. Plum sets a Ram screen on Parker before Hamby steps up to screen for Gray. Look at how differently this plays out.

You'll notice off rip that Parker is playing lower on the floor. 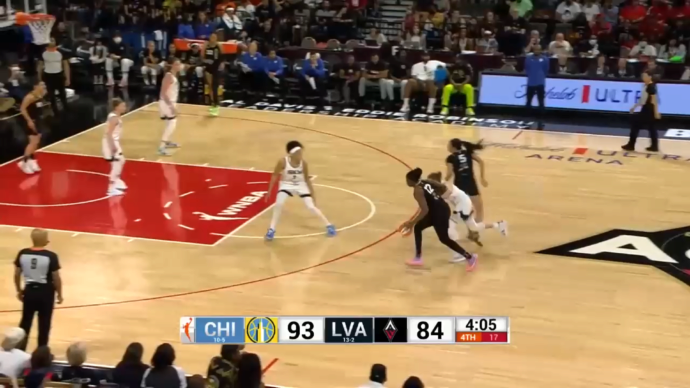 As Allie Quigley attempts to fight over the screen, Gray releases a pocket pass to Hamby early. Quigley then peels out to pick up the drive, a stark difference from the driving lane Hamby had on the opening possession.

In the strong side of the action, Plum is once again relocating to the corner behind a Wilson screen. But because Hamby is picked up earlier, she's forced to kick the ball out. The pass is a sloppy one — Hamby's a good passer, especially for her position, but she's better a picking out cutters in set actions than on-the-move kick-outs — which allows Quigley time to close out.

(I'll pause here to relay that, to this point, the Sky have done everything right and their reward is the Aces flowing into a Plum-Wilson ball screen. These Aces, man.)

The Aces turn to their stars for Plan B, but the Sky dial the pressure back up. With Plum on the sideline, Meesseman steps up to trap the action. Wilson slips out and receives a feed from Plum, but the Sky rotate well behind the trap. Kahleah Copper slides up to pick up Wilson, and Parker is splitting the difference — playing between two Aces — behind her. 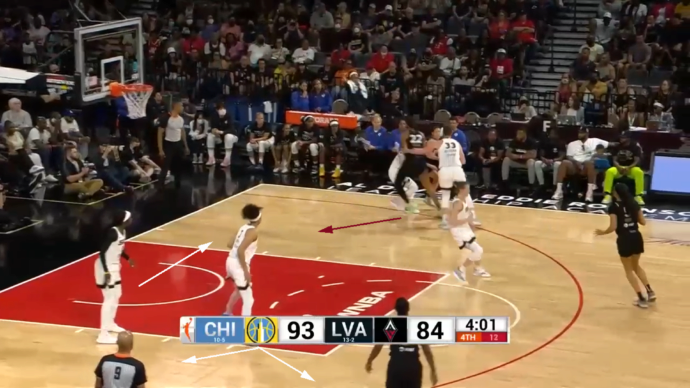 The possession ends in a rushed, semi-contested middy from Wilson. She can make that shot, but that's a low-end outcome compared to what the Aces were getting earlier in the game. 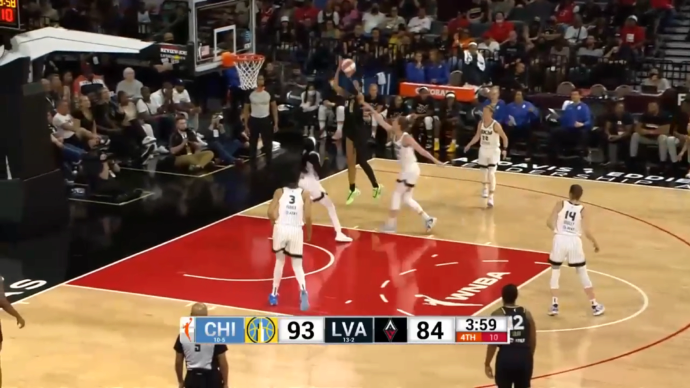 With the Sky able to get more stops, they were able to use their prowess to create easier offense. Though the Aces blitzed them in the first quarter, it's worth noting the Sky weren't awful offensively (47.1% from the field), and they burned the nets in the next three quarters (60.3% FG).

History was made for the Sky as well. They took the opening punch from the Aces, saw their deficit grow to 28 points in the second quarter, and completely flipped the script from there. The 28-point comeback win was the largest in WNBA history.

Amazing how a small tweak can lead to big changes.