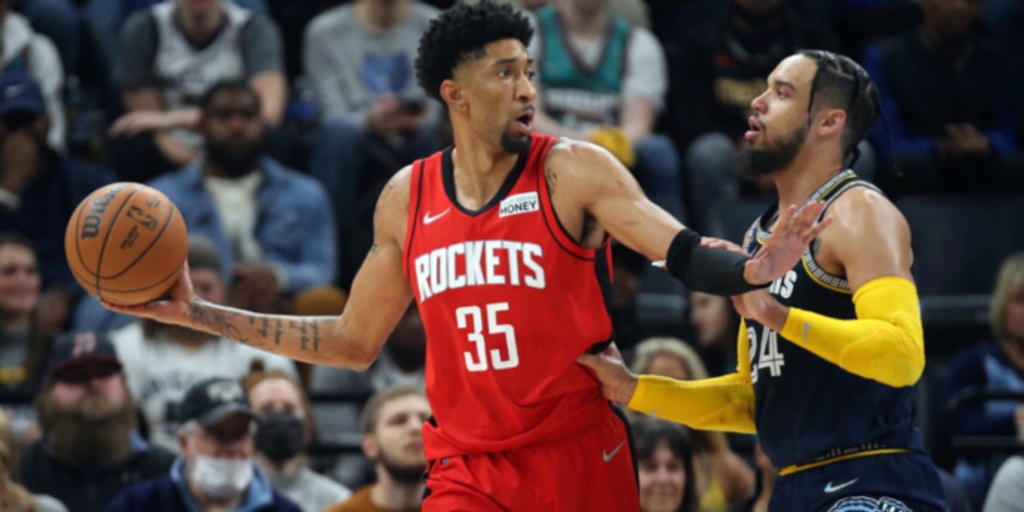 The Houston Rockets are trending upward.

We're three weeks removed from on-the-hot-seat reporting from Bleacher Report's Jake Fischer concerning head coach Stephen Silas. The offense was bland and ineffective; the defense was spotty, to be kind. It wasn't all on Silas, as explained in this space, but things certainly didn't look good.

Since that report, the Rockets have won eight of their last 11 games behind an elite offense (116.4 Offensive Rating, 3rd in the NBA). The defense still ain't great — it's actually gotten worse (115.7 Defensive Rating, 26th) during this stretch — but it hasn't bitten them yet.

Despite the recent success, the Rockets are aware of where they are: Stage 1 of the rebuild. As such, the phone lines are open for some of their veterans. Chief among them is Christian Wood, an All-Star caliber frontcourt talent.

On the surface, that's a surprise. When you think of Rocket vets that could swap teams, you'd likely land on 32-year-old Eric Gordon (absolutely balling as of late) or 29-year-old Daniel Theis. Not only is Wood better than both players, he's also much younger (26 years old).

But over the last week, ESPN's Tim MacMahon and Bleacher Report's Fischer have hinted at a willingness to at least hear offers for the big man. The price would likely be steep — Fischer ballparks it at "a first round pick plus further capital" in his latest report — but that could be worth it for a team looking for help up front.

As our Jackson Frank wrote before the season, there aren't many centers more gifted than Wood on the offensive end of the floor.

He's a dynamic partner in ball-screens, able to beat defenses as a roller or popper. He transitions smoothly from screener to roller or popper, allowing him to get a jump on the defense depending on what coverage they're in.

Wood has had to pop more this season due to the spacing around him, but he remains a paint threat due to his ability to pump-and-go. Leave him completely open and he'll fire above the break; close-out too hard, and he'll get downhill.

Wood's ability to handle could be an added dimension for a team. He's not a Giannis-type threat to grab-and-go after misses, but he can push a break and allow offenses to attack earlier. His handle also allows him to initiate — or fake — handoffs against unbalanced defenses.

This is a down year for Wood as a finisher — spacing and playmaking issues have put a more difficult self-creation load on him — and he's still converting 73% of his shots inside of 3 feet, per Basketball-Reference. There's room to believe he could be even more effective with more room to operate, and/or more dynamic ball-handlers to work with.

While Wood is able initiate some early offense in Delay sets, he doesn't have the passing chops to act as a true offensive hub. That's not inherently a bad thing; a team hoping to acquire him just has to understand he's a play-finisher that can sometimes get you into your offense, not Western Conference Domantas Sabonis.

Wood isn't the quickest processor when forced to make playmaking reads, and his actual pass accuracy leaves a bit to be desired. Combine those traits, and you get some rough turnovers when he's in creator mode.

Defensively, Wood doesn't have the spatial feel to hold up as a primary rim-protector. His drop coverage film is littered with possessions of him conceding too much space to the ball-handler, or playing too high up (in a hunched over stance, no less) on the floor, allowing his assignment to get behind him for lobs.

Wood has shown some comfort switching out on the perimeter. He also possesses the mobility and hands necessary to play in more aggressive schemes. The swing skill for him would be his recovery; cutting off a ball-handler is one thing, but finding your assignment after the hedge is a separate task that he's had uneven results with.

Even with some of his limitations, he's shown to be an active communicator. He's been a competent weak-side rim-protector. So long as you have good personnel around him, Wood can be a positive cog in a system.

If you're looking for a team with 1) a dynamic ball-handler, 2) plenty of spacers and 3) a strong defensive infrastructure, look no further than the Golden State Warriors.

Among the many weapons the Warriors have at their disposal, a vertical spacer is one they currently lack. It's safe to say Wood could slot right into that role. This may shock you, but Stephen Curry has had success with those type of partners.

Since the 2017-18 season, ball-screens spearheaded by Curry have generated roughly 1.08 points per possession — the best high volume mark in the NBA over that stretch, per Second Spectrum. When working with an athletic vertical threat — let's say JaVale McGee, Damian Jones, and Marquese Chriss — that number jumps to 1.12.

Last season's blockbuster trade cut the sample short, but it's worth noting just how successful the James Harden-Wood connection was last season (north of 1.13 PPP). It's fair to believe the Curry-Wood pairing would be a darn good one.

And if you need defensive covering for Wood, is there a better guy to pair him with than Draymond Green? Curry would be step up from what Wood has had to cover for at the point of attack this season; doubly so when Curry is replaced by Gary Payton II in the lineup.

The complicated matter would be the price. I would imagine the Rockets would want two of the Warriors' three young prospects — James Wiseman, Jonathan Kuminga, and Moses Moody — if possible.

The Athletic's Tim Kawakami recently laid out a strong argument regarding why the Warriors don't want to part with Wiseman right now. Beyond that, it would be shocking if the Rockets prioritized Wiseman considering they just drafted Alperen Sengun (please play him more!) and Usman Garuba over the summer.

Kuminga and Moody might be considered steep for the Warriors; only flipping one of those would make salary matching a bit of a chore. The Warriors do have all of their future firsts, sans a 2024 pick that will likely transfer to the Grizzlies.

For an off-the-radar team, how about the Minnesota Timberwolves?

Their defense has been surprisingly sturdy (6th in half-court defense, 12th in overall DRTG) thanks to an aggressive scheme. The offense has lagged behind (26th in half-court offense, 24th overall ORTG) behind spotty shooting and a quietly-subpar conversion rate at the rim.

The (admittedly reductive) question I have: What do the Wolves look like with Wood instead of Jarred Vanderbilt in the lineup?

Wood is not the overall defender that Vanderbilt is, but how much of the backline workload could he replicate? More importantly, is the gap between the two as defenders greater than the gap in scoring chops?

To the defense point, the Wolves often play at, or above, the level of the screen when defending pick-and-rolls. That puts strain on the backline to clean up messes behind it. Like this, basically:

One blocked shot doesn't mean he can be peak Paul Millsap in this role, but again, Wood does possess legit weak-side rim-protection chops. If he can nail those rotations, the Wolves shouldn't see a major slide defensively. It also helps that Wood is one of the best defensive rebounders in the sport. The Wolves have, uh, struggled (30th in defensive-rebound rate) in that regard.

The offensive upgrade is an easier case to make. Wood has shot 36.9% from three dating back to his Detroit season (2019-20), and has converted 40% of his corner threes in that time frame. He's both a better shooter, and more of a threat to beat a (soft) closeout than Vanderbilt is.

With Karl-Anthony Towns often setting up shop above the break or from the mid-post, Wood seems more equipped to convert catch-and-shoot looks, or to take advantage of the space Towns provides with drives, and cuts, or to work as the screener in pick-and-rolls.

About those pick-and-rolls: I'm be interested in seeing what he could do when screening for D'Angelo Russell or Anthony Edwards.

Like the Warriors example, the price is worth the pause. The Wolves have all of their firsts moving forward. They also have Jaden McDaniels, an intriguing, rangy forward worth investing in.

The salary filler is where things could sputter. Taurean Prince probably isn't enough short-term help; Malik Beasley would further crowd the guard room, and I'm not sure how willing the Wolves would be to part with him. There's an intriguing package to be made, though.

I'd like to live in a world where Luka Doncic has a legitimate roll man (and thus, a complement to Kristaps Porzingis up front), but I'm not sure the Mavericks have the horses to get a deal done. What exactly is Tim Hardaway Jr. doing for this version of the Rockets?

The Hornets haven't just been linked to Wood in the past; they literally had him on their roster a few years ago, though this was obviously before he broke out. They could use some frontcourt juice, and have enough wing talent (hello, Kelly Oubre Jr.) to potentially intrigue the Rockets.

We'll keep an eye on the talented Houston big man moving forward, because there are bound to be plenty of suitors.