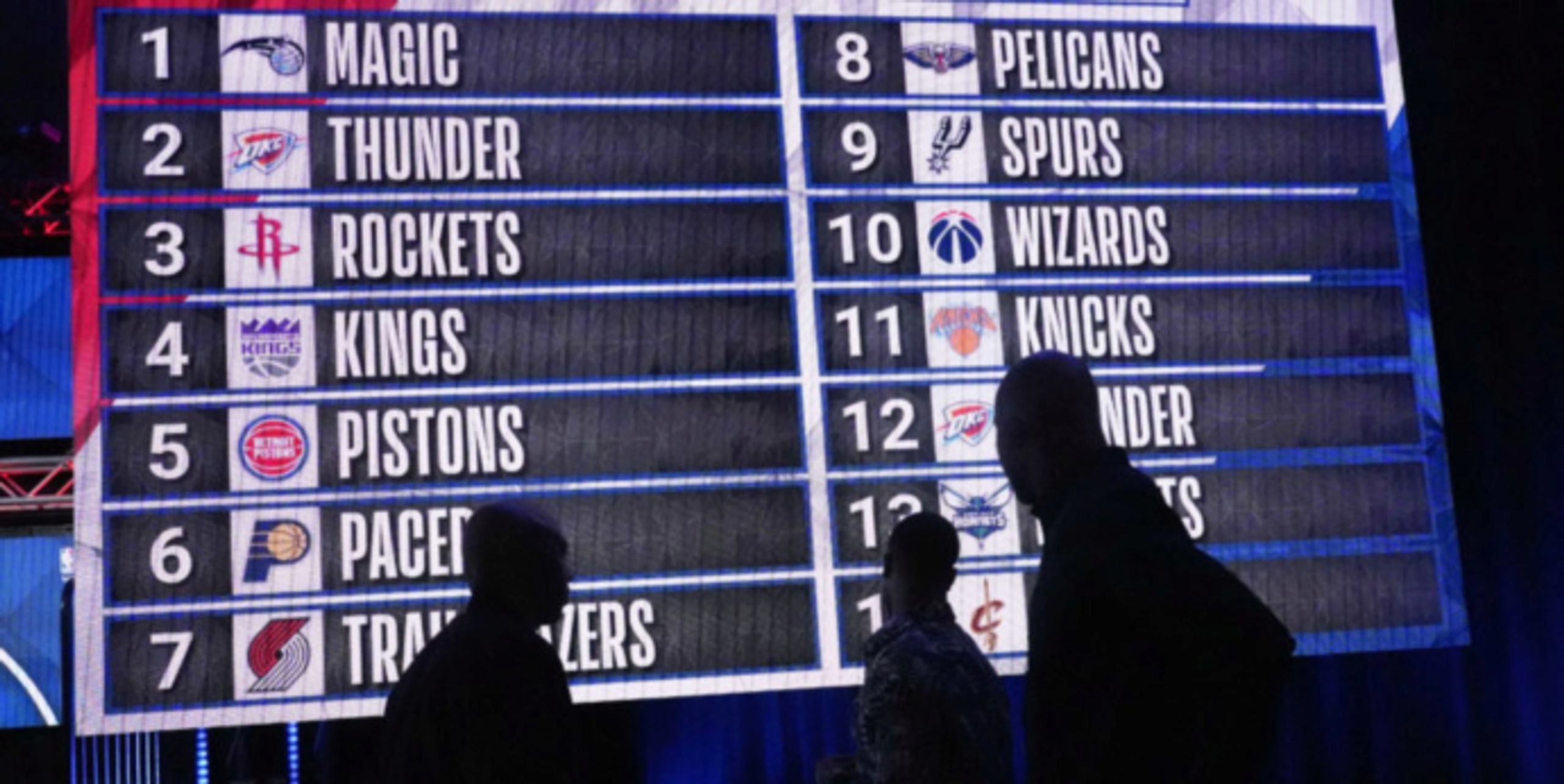 Examining the success of teams selecting No. 2 in the NBA Draft

The Oklahoma City Thunder came out of last Tuesday’s NBA Draft Lottery as the night’s runner-up, taking home the No. 2 overall pick.

The Thunder have never received the first-overall pick in their franchise history, which technically goes back to 1967 when they were still the Seattle Supersonics. They have selected second on two occasions though, and both worked out really well (Kevin Durant in 2007 and Gary Payton in 1990).

The Thunder have a war-chest of draft picks in the coming years, but those picks are meaningless if they don’t select a franchise-altering talent. Fortunately, the No. 2 pick should provide an opportunity to do so. The 2022 draft class features a few “can’t-miss” prospects, including Auburn’s Jabari Smith, Gonzaga’s Chet Holmgren and Duke’s Paolo Banchero. All three have their pros and cons, but adding any of them to the existing core of Shai Gilgeous-Alexander and Josh Giddey should work out beautifully.

In the 2021 NBA Draft, the Thunder made six selections, but they traded three of those players. They added Giddey (who was named to the 2021-22 All-Rookie Second Team), Tre Mann and Aaron Wiggins – none of whom are bigs. The Thunder did trade for a seven-footer in the 2020 draft (Aleksej Pokusevski), but he’s still extremely raw and is not the same caliber of player as the top-three prospects.

Of course, there is still a lot of work to be done through the scouting process to effectively evaluate all three of this draft's most-coveted prospects, but a look back at the last 10 NBA drafts reveals a murkier history than one might assume. After examining the success of teams selecting No. 1 in the NBA Draft last week, let's look at how recent No. 2 overall picks have fared.

The Hornets bombed with the second pick in 2012. Kidd-Gilchrist had a fine career, averaging 12.3 points and 7.9 rebounds per game across eight seasons in the NBA. The thing is, Bradley Beal was selected third and Damian Lillard was selected fifth, and both of those guys are All-NBA-caliber players annually. Comparatively, that’s a huge miss for Charlotte.

The Cavaliers certainly surprised many of us by picking Anthony Bennett with the first overall pick, but the Magic stuck to the script. Oladipo was universally seen as a top-three player in this draft, and he became the second-best player in the class before knee and quad injuries derailed his career.

As much as injuries have robbed much of what Oladipo was, he is still an intriguing player, and he’ll probably command some decent free-agent offers this offseason. Obiously, CJ McCollumn (selected 10th) and Giannis Antetokounmpo (selected 15th) are better players, but neither was being considered by the Magic. Considering that Oladipo is a two-time All-Star, an All-Defensive selection and a one-time All-NBA selection, I’d say the Magic did a fine job in picking Oladipo.

The 2014 draft was a weird one. Neither the first nor the second pick ended up being the best player from this draft class. Andrew Wiggins found a good role, even if he is far less successful than most thought he’d be, but Jabari Parker really underwhelmed. Granted, Parker stuck around in the league for eight seasons, including some of the current one, but his career simply never materialized even if it’s not his (nor Milwaukee’s) fault.

Parker tore his ACL twice. He looked like he was becoming a pretty darn good player (even if he was a defensive liability) before the second ACL injury, averaging 20.1 points and 6.2 rebounds per game in 2016-17. However good Parker could have been, the fact of the matter is that Joel Embiid was intriguing enough as of draft night to be taken one pick later, and that stings.

Here’s an instance where a player actually was worth a top-three pick. The problem is that the Lakers had the second pick, and there’s a big difference between Karl-Anthony Towns or Devin Booker and Russell. Making matters worse, the Lakers sent Russell to Brooklyn before he matured. His immaturity was part of the reason he was traded, but that doesn’t change the fact that the Lakers picked him and moved on very quickly. Russell may or may not end up being a franchise-altering talent, but he hasn’t realized his full potential yet, and he clearly won’t do so for the Lakers.

Ingram is one of the best No. 2 picks in the last 10 drafts. He’s a true number one option on a playoff team, a career 18.5 points-per-game scorer and a one-time All-Star. It’s debatable that Jaylen Brown (selected third) and/or Jamal Murray (selected seventh) are as good or better players, but both have played alongside more talented teammates throughout their careers.

Ingram has been the best player on the New Orleans Pelicans for a few years now, and we shouldn’t take for granted the fact that Ingram led a playoff team this season. Sure, the Lakers didn’t cash in on him specifically, but he was part of the package that led to Anthony Davis landing in Los Angeles. So, it worked out for them too.

The Lakers picked second overall again in 2017. They weren’t as successful this time around. First, there’s Jayson Tatum to consider. Tatum was selected third and is the best player in the 2017 draft class. Being selected by the Lakers wouldn’t have changed that, and that should be enough. But there’s also Ball’s rough shooting mechanics to consider. Sure, he’s grown into a good shooter, but the Lakers didn’t benefit from that. It’s hard to categorize Ball’s selection as an outright failure because like Ingram, he helped facilitate Davis to the Lakers. Still, it's tough to classify his selection a success.

Bagley might be the worst second pick in the last 10 years. The 2018 NBA Draft will forever be remembered as the Luka Doncic class. The Kings could have drafted Doncic, as he was still on the board, but they chose to go with Bagley instead. Bagley isn’t even on the Kings any longer, and his time in Sacramento was not memorable.

Bagley is a sub-par defender and three-point shooter. He’s scored the ball at a decent pace, averaging 19.5 points per-36 minutes, but he’s never earned a big enough role to demonstrate what he can really do, and he’s exclusively been on losing teams. Comparatively, Doncic and Trae Young (selected No. 5 in 2018) have turned their franchises around.

Ingram was the best second pick in the last 10 years, until 2019. Morant stole that made-up accolade almost immediately in his rookie season. The thing is, the 2019 NBA Draft was supposed to be all about Zion Williamson. However, unlike Williamson, Morant has backed up all the hype and then some. So, while Williamson has dealt with injuries for much of his young career, Morant has brazenly become the face of his draft class.

Morant is drawing comparisons to numerous superstars, and he was named to the 2021-22 All-NBA Second Team. No one selected after him comes close to making the Grizzlies think twice about their decision.

Unlike his brother Lonzo, LaMelo Ball was deserving of the second pick in 2020. Instead, the Golden State Warriors went with James Wiseman, though the logic behind the pick is clear, even in retrospect. The Warriors already had two All-NBA guards. The thing is, Jordan Poole looks pretty good alongside Steph Curry and Klay Thompson, doesn’t he? So, it’s feasible to assume that Ball would have fit too.

After two seasons, Ball is a significantly better player, but he’s also had plenty of opportunity to demonstrate that fact. Wiseman has had terrible health-related luck. He played in 39 of the Warriors' first 53 games in 2020-21, but he tore his meniscus in Golden State’s 53rd game of the season and hasn’t been seen since. Wiseman could still be a serious contributor, as his per-36 numbers were impressive for a rookie (19.3 points, 9.7 rebounds, 1.6 blocks and 1.1 assists on .542/.316/.628 shooting). This is one we’ll have to continue monitoring.

Basing the success of a pick on only a rookie season is tough. Green posted an impressive rookie campaign, but his defensive deficiencies were clear. That’s an understandable flaw for a rookie. Green was the assumed second-best player in the class. Having the luxury of hindsight, we now know that Scottie Barnes (selected fourth) and Evan Mobley (selected third) translated to the NBA incredibly well. But wing scorers have a tougher time making the jump, as they must shoot deeper three-pointers and compete against far more athletic competition. Green’s floor may be lower than that of Barnes and Mobley, but I'd argue that his ceiling is still higher. Let’s give him a little more time.

A deeper examination of No. 2 overall picks reveals a limited number of franchise-altering talents. For every Kevin Durant, Jason Kidd, Gary Payton, Earl Monroe and Bill Russell, there are a number of players who didn't live up to expectations. Sometimes, there isn't a generational player on the board; other times, the team picking No. 2 overall just overthinks it or goes in the wrong direction. Either way, No. 2 hasn’t produced as many all-time greats as you might expect, but there have been quite a few significant contributors.