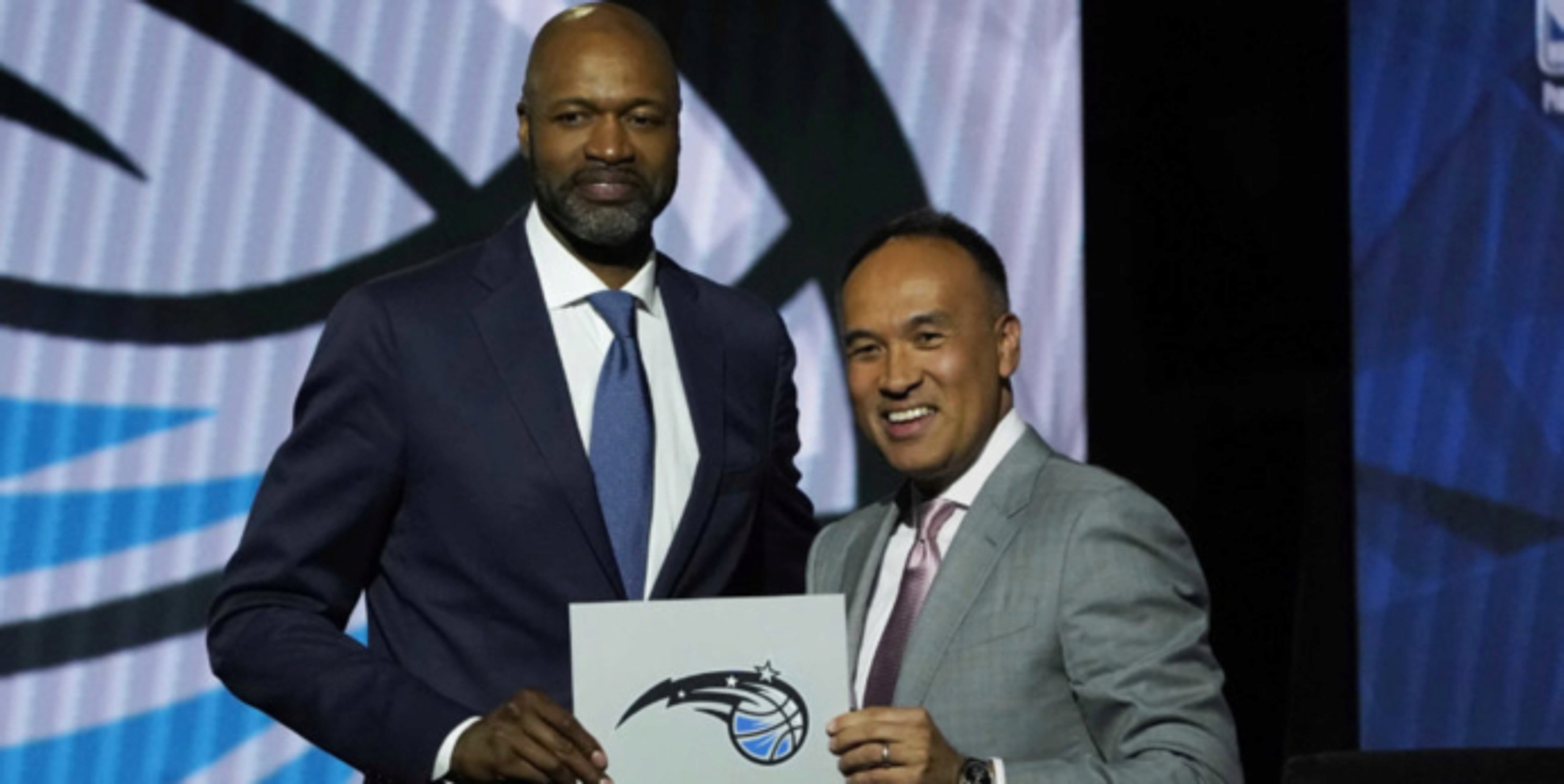 Examining the success of teams selecting No. 1 in the NBA Draft

The Orlando Magic came out of Tuesday’s NBA Draft Lottery as the big winners, winning the No. 1 overall pick for the fourth time in franchise history.

Winning the lottery is a big deal for any team, as it gives them a tremendous opportunity to add an elite young talent. The 2022 draft class features a few “can’t-miss” prospects who have already adequately separated themselves from the other top youngsters. Auburn’s Jabari Smith, Gonzaga’s Chet Holmgren and Duke’s Paolo Banchero are easily the most electrifying players in the 2022 class.

All three of these prospects are versatile big men, which is a role that the Magic would be well-served in addressing. Orlando had two lottery picks in 2021, which they used on Gonzaga point guard Jalen Suggs and Michigan small forward Franz Wagner. If the Magic add a big man who grows into a superstar, their roster will be mostly set for the foreseeable future.

Of course, the allure of prospects wears off almost immediately after the draft. Ignoring the scouting process and all the work that goes into prosect evaluation, a look back at the last 10 NBA drafts reveals that first-overall picks are far from the sure things we make them out to be:

Ten years ago, the New Orleans Pelicans selected Anthony Davis with the No. 1 pick. Davis grew into a superstar quickly, and his impact on the Pelicans was clear almost immediately. He led the Pelicans to the playoffs twice, in 2014-15 and 2017-18. The 2017-18 team was particularly good, winning 48 games in the regular season with a core of Davis, DeMarcus Cousins and Jrue Holiday. Cousins’ injury played a major role in Davis departing the Pelicans, as New Orleans failed to replace Davis’ friend and running mate. Had Cousins stayed healthy, who knows how good New Orleans could have been?

Still, Davis is clearly a great player who was absolutely worthy of the No. 1 pick. He has become an eight-time All-Star and earned a spot on the NBA's 75th Anniversary Team. Davis helped the Los Angeles Lakers win a championship in 2020, and he has career averages 23.8 points, 10.2 rebounds 2.3 assists, 2.3 blocks and 1.4 steals.

Verdict: Success, although not necessarily for New Orleans.

The Cleveland Cavaliers picked first overall in 2013 and 2014. The strange thing about both picks is that neither Anthony Bennett nor Andrew Wiggins made an impact in Cleveland. Both were sent to Minnesota in a package for Kevin Love. Bennett played one uneventful season with the Cavaliers, and Wiggins was sent out prior to the start of his rookie season. So, which team do we assess? Cleveland or Minnesota? Let’s review both.

Technically, getting two consecutive first overall picks and trading them to the Timberwolves helped Cleveland win their first championship in franchise history. That’s a big win for the Cavaliers, even if it cost them both players. Cleveland’s championship was more so a product of LeBron James (and Kyrie Irving to a lesser extent), but Love was impactful and the trade worked out.

Conversely, Minnesota did not fare well with Wiggins and Bennett. They qualified for the playoffs only once in Wiggins’ five-and-a-half seasons in Minnesota, and Bennett was off the team after only one season. Wiggins seems to have found a home in Golden State, but he's the team’s fourth-best player, which is not what most people expect from No. 1 picks (especially one with Wiggins' hype).

Verdict: Both are failures relative to expectations, but Wiggins has become a significant contributor.

Speaking of Minnesota, they fared so poorly following the aforementioned Love-for-Wiggins-and-Bennett trade that they received the No. 1 overall pick in 2015. Yes, that means they technically had the first overall picks from three consecutive drafts on their roster, at least for a short period of time.

The pick in 2015 turned out to be Karl-Anthony Towns, who has now played seven seasons in Minnesota. Until recently, the Timberwolves' front office failed to surround him with the talent needed to compete. Towns has led Minnesota to the playoffs only twice, but regardless how one views the lack of team success, Towns was a good pick. He's a career 20-and-10 guy who shoots an unbelievable 40% from three-point range. The 26-year-old is a perfect big man for today's NBA.

Verdict: The Towns pick is a relative success.

We can’t really discuss the first overall picks of the past 10 seasons without diving into Sam Hinke’s Philadelphia 76ers. Hinke led the “Trust the Process” 76ers from 2013-2016, during which time he received significant scorn from the NBA, media and basketball purists who felt he was cheapening the game by blatantly losing to increase the odds of being awarded the first overall pick.

Thoughts on Hinke’s philosophy aside, he picked first overall in two consecutive seasons. Philadelphia won the draft lottery in 2016, selecting Ben Simmons. Then, they traded up to No. 1 overall in 2017 to nab the rights to Markelle Fultz.

Neither Simmons nor Fultz fulfilled their potential in Philadelphia. Fultz had a misdiagnosed shoulder injury, which resulted in an awkward shooting motion. After two sub-par seasons in Philadelphia, he was traded to Orlando, where he’s played better but still nowhere near what's expected from a No. 1 pick.

Simmons was better for the 76ers, co-leading them to the playoffs in four consecutive seasons. But Simmons’ time in Philadelphia ended infamously last season, culminating with him forcing his way to Brooklyn after a lengthy holdout.

Verdict: Degrees of failure, though Fultz was considerably more disappointing than Simmons. At least Simmons became a three-time All-Star and Defensive Player of the Year runner-up.

The Phoenix Suns picked first in the 2018 NBA Draft, which is another strange case. Objectively, Deandre Ayton is a major piece on Phoenix’s roster. In his fourth NBA season, he averaged an impressive 17.2 points and 10.2 rebounds per game.

Can we really analyze players in a vacuum though? Ayton was picked a few selections before Luka Doncic, who received serious first-overall-pick buzz that June. Imagine if the Suns had paired Doncic with Devin Booker? Like the Rockets and Trail Blazers both did in 1984, the Suns simply overthought this one.

2018 is too recent to accurately judge the long-term impact of this pick. Ayton could very possibly end up being a major contributor on a championship team. Still, this is a push at best, and if he ends up signing elsewhere this offseason, that makes the Ayton selection look even worse.

Verdict: Who the hell knows?

New Orleans also picked first overall in 2019, selecting the electric athlete, Zion Williamson, who is the toughest first pick to grade in the last 10 years. In his lone injury-free season, he averaged 27 points and 7.2 rebounds per game while shooting 62% on two-point attempts.

But injuries make it far more difficult to grade him. Williamson has played in only 85 of a possible 202 career games, missing the entire 2021-22 season.

Minnesota is experiencing a major resurgence, and the credit belongs to Towns and the 2020 first overall pick Anthony Edwards. Edwards had a good rookie season, but he exploded in his sophomore campaign.

Verdict: After only two seasons, Edwards looks like a huge win for Minnesota.

Last but not least, the Detroit Pistons selected Cade Cunningham first overall in 2021. Despite playing alongside less talent than most of his peers, Cunningham's rookie campaign was successful. He averaged 17.4 points, 5.6 assists and 5.5 rebounds, was named a unanimous All-Rookie First Team selection and placed third in Rookie of the Year voting.

One season is too small of a sample size to grade a young player, but Cunningham looks like the absolute right pick.

For every franchise-changing No. 1 overall pick — such as LeBron James, Shaquille O'Neal, Tim Duncan, Magic Johnson and Kareem Abdul-Jabbar — there are a handful of players who didn't work out in the long run. Sometimes, there isn't a generational player on the board; other times, the team picking No. 1 overall just overthinks it or goes in the wrong direction.