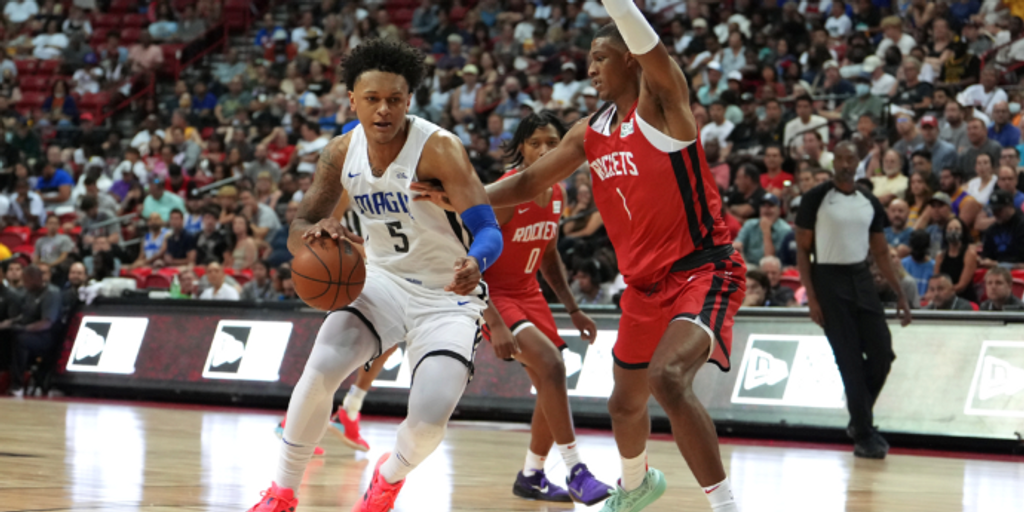 Delving into the significance of Summer League for NBA teams, prospects

Well, it's probably more accurate to say I love what Summer League represents.

It's an opportunity for rookies to get a taste of the NBA. Second- or third-year players have the chance to hone specific areas of their games. If you're a former high pick who hasn't had a great start to your career, here's a chance for you to showcase something for evaluators — on your own team or around the league — to ponder. If you're hoping to make the leap from overseas, or find overseas work, Summer League can serve as an opportunity to get on a team's radar.

All of that is dope to me.

As someone who doesn't do a heavy dose of draft content, I especially love watching rookies in this element. It serves as a meet-and-greet for me, an introduction to the NBA's future. It's an informative, fun, and oftentimes wholesome endeavor.

It can also be a little bit annoying.

Annoying in the sense that the flashes you look for — a high-level pick-and-roll read here, a weak-side rotation into a block there — can also be gone in a flash. Literally.

I was enjoying the mid-post dominance of No. 1 overall draft pick Paolo Banchero, and found intrigue in the way defenses were poking holes into the Orlando Magic rookie's approach. But we got two games of the Paolo Experience before the team shut him down for the summer.

Sometimes, we may not get the flashes at all.

Atlanta Hawks wing AJ Griffin, arguably the best shooting prospect in this year's class, didn't play at all due to "right foot discomfort." You don't want to mess around with foot injuries, of course... but discomfort? Not a sprain, not even soreness, but discomfort? What does that mean?

And that takes me to a question I've had for a while now: On the teams' side, what does Summer League mean to them?

I come back to the Griffin situation with the Hawks. Griffin experienced some discomfort, so they held him out of play altogether. When asked about Griffin's status during Summer League, Hawks coach Nick Van Exel (what a hooper in his day) made sure to express he wasn't concerned about Griffin's health long-term.

"It's just day-to-day with him," Van Exel told a group of reporters. "It's Summer League, so we'd like to have him out there with us, but it is Summer League. It's just Summer League. We got a long, 82-game season, and that's what's more important."

Well, that helps. Summer League is Summer League, and the regular season is more important; who would've thought?

On a serious note, there seems to be a line for teams. Summer League reps are valuable, but not that valuable. There's the competition level, of course — we're not seeing LeBron James out there; though if we did, it's safe to assume Russell Westbrook would be in the other gym — but there's also the lack of real structure.

The mix of rookies, second-year players and out-of-league talent altogether leads to a rather bare-bones experience in terms of cohesiveness. There isn't a ton of practice time, so the lack of continuity on both ends should be expected. Because of that, it's hard to glean too much aside from the flashes. Add in the risk of injury, and teams can be wary of having their guys out there for too long.

"It's sort of like, 'Is there anything more to gain here or are we risking injury or bad habits being developed?'" The Athletic's Seth Partnow, who was previously the Milwaukee Bucks' director of basketball research, told Basketball News.

“If you remember, I hurt my knee towards the end of my rookie season [with the Sacramento Kings] and they shut me down the last couple of weeks of the season," Indiana Pacers guard Tyrese Haliburton relayed to Basketball News. "They basically told me ‘Hey, you’re not playing Summer League.’ And I was like, 'Okay.' I was still able to be around my guys and support them though.”

Hailburton continues: "Summer League can get reckless. Some of those guys are playing for more than we are — like, they’re playing for their livelihoods. So I can understand organizations being a little worried about guys getting hurt."

Haliburton posits that the decision-making process for playing time should be judged on a "GM-by-GM basis," with some opting to be more risk averse to protect their investments. It also wouldn't be a shock to see more teams go conservative.

"I'd imagine New Orleans might be a little more hesitant to play their young guys a lot moving forward with [EJ] Liddell getting hurt," Haliburton added.

That's a reference to New Orleans Pelicans wing EJ Liddell, their second-round pick from this year's draft who suffered a torn ACL during his second Summer League game. Liddell was viewed by some as a steal, drawing loose comps to Philadelphia 76ers forward PJ Tucker. We'll now have to wait to see how his game projects on the next level.

Though teams may opt to limit Summer League reps moving forward, it's worth nothing that there's still value in having the young guys play. While Banchero only played two games, many lottery picks, including Cleveland Cavaliers wing Ochai Ogbaji, played doubled that amount.

What, exactly, goes into that decision?

"I think we consult with our coaching staff, our front office and our training staff and try to figure out what the best decision is for each guy," Cavs summer coach Mike Gerrity told Basketball News. "It's just about managing [their workload], checking with them to see how they are feeling and then kind of making the decision from there."

It's a collaborative effort for the Cavs, much like it is for the rest of the league.

The goal is fostering the right environment for growth — for the players and staffs involved. At best, that summer growth can act as a springboard for the upcoming season. Summer League will never be as important as regular-season play, but there's something to be said for the opportunities it provides.

Steve Jones Jr, a former video coordinator and assistant coach in the league, summed it up beautifully during a recent episode of The Dunker Spot.

"There's just too much opportunity involved for me to be like 'it doesn't matter.' It's a chance to get a bag somewhere in the world. It's easy to forget that portion. It's an opportunity to get your name out. If you're on a staff, it's a real opportunity. For me, that was my first chance to really flex my muscles and elevate my role a little bit. Really getting to walk through sets, run through parts of practices, trying to find my voice as a young coach — that was good stuff. There's value in it."