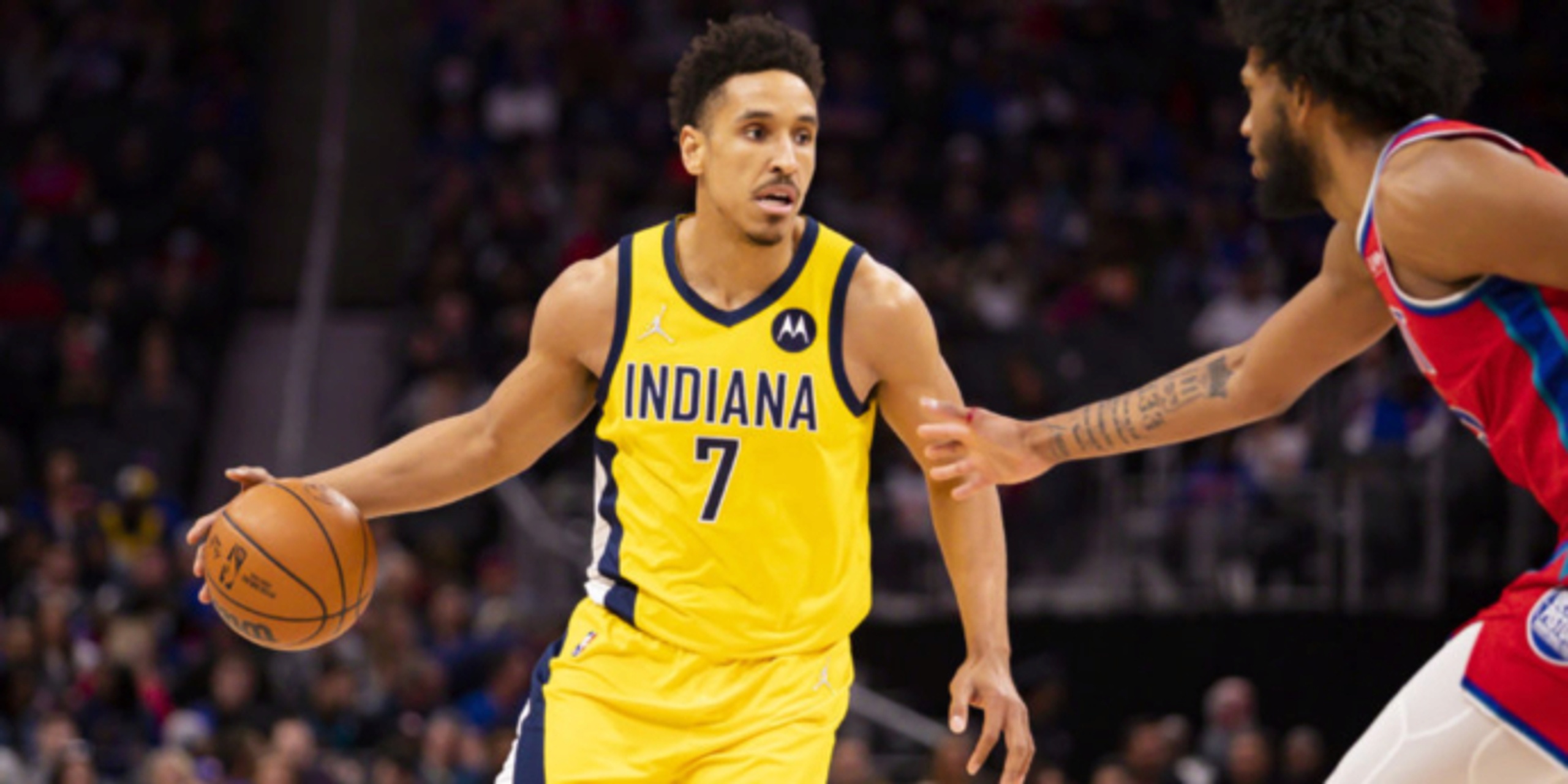 The Tyrese Haliburton era is well on its way in Indianapolis, which means it’s likely time to say adios to Malcolm Brogdon in an Indiana Pacers uniform. Brogdon is one of the more obvious trade candidates in the NBA this offseason thanks to his consistent injury issues and Haliburton’s quick emergence. Despite Brogdon's missed games, he will still attract interest from rival teams.

During Brogdon’s three-year tenure with the Pacers, he averaged 18.9 points, 6.3 assists, 5.1 rebounds and 0.8 steals per game on a 55.3 True Shooting percentage. Brogdon always produced when he was on the court for Indiana, but his availability was an issue. Going forward, it’s going to be hard for Brogdon to shed the “injury prone” label because it’s been an issue dating back to his collegiate career at the University of Virginia.

Aside from injury concerns, Brogdon’s market will be robust with playofff or championship-hopeful teams lining up for his services. As a versatile multi-positional defender, connective playmaker and secondary scorer, Brogdon can really help a team that's going in the opposite direction as the rebuilding Pacers.

Without further ado, let’s go ahead and dive into the most realistic trade packages Indiana could expect for Brogdon this offseason. As Indiana turns the page to Haliburton, it’s time to extract some value from a potential Brogdon deal.

Phoenix’s lack of guard depth was exposed throughout the playoffs. They simply can’t rely on Cameron Payne anymore, who was a DNP-CD when it mattered most in the Western Conference Semifinals. Phoenix flirted with the idea of chasing Brogdon before signing Ricky Rubio back in 2019. Three years later, bringing Brogdon to the Valley as the Suns’ short-term backup and long-term fit alongside Devin Booker is a home run transaction.

Also, there has been some buzz that the Suns are trying to get into the 2022 NBA Draft. They have met with multiple players projected to be selected in the mid-to-late first round, including LSU’s Tari Eason, Ohio State’s E.J. Liddell and Duke’s Wendell Moore. Adding any of those prospects will be impossible without adding a pick. The Suns could always buy an early second-round pick for $3 million, but that’s never been their way of thinking.

Is this where Suns GM James Jones could get creative to snag a championship piece at discounted value? Brogdon and Chris Paul sharing minutes is a dream scenario for Phoenix since all 48 minutes at point guard would provide well above-average production. Also, we could see three-guard lineups galore thanks to Brogdon’s versatility.

In this scenario, Indiana would add a shooter in Shamet who only has two guaranteed years left on his extension. Maybe Shamet could be their Buddy Hield replacement if they also decide to trade him soon. Adding a future first for Brogdon is the right risk for Indiana to take as well.

The Jazz desperately need to shake things up. Stagnation is on the horizon in Salt Lake City, if it hasn’t reached that point already. Utah may blow it up this offseason, but even if they don't, they need to do something in order to keep Donovan Mitchell and Rudy Gobert happy long-term.

As we saw during the Jazz’s quick postseason exit, Conley seems like a shell of himself. Looking back on that trade now, Utah has to be kicking themselves for surrendering so much for the veteran point guard.

Utah needs to get creative to avoid moving one of Mitchell or Gobert soon, so Conley going back home to Indianapolis makes a lot of sense here. Brogdon is a huge upgrade over Conley, and he helps address a dire need of perimeter defense.

Indiana would add a veteran mentor for Haliburton to lean on for a year since Conley’s contract isn’t fully guaranteed in 2023-24. Adding a young scoring guard in Butler alongside a future second-round pick might not be enough for the Pacers, but it's at least enough to start negotiations.

This only makes sense if the Pacers are willing to take on the final year of Westbrook’s contract, which would have any team second-guessing themselves beforehand. Surprisingly enough, Indiana is actually the betting favorite to land Westbrook if the Lakers offload him this offseason.

The Pacers would need a hefty return in order take on Westbrook while also relinquishing Brogdon and Hield. Adding Horton-Tucker, two future second-round picks and the Lakers’ next available first-round selection gets the job done. Los Angeles would hate to part with THT and even more draft capital, but Brogdon and Hield are perfect pieces to place alongside LeBron James and Anthony Davis. Who knows, maybe Bitadze slides into the Lakers’ rotation as the backup center?

Indiana is embracing a full-scale rebuild, and pulling off a move like this would be consistent with that approach.

As our Nekias Duncan recently wrote, a D’Angelo Russell departure from Minnesota feels imminent this summer. It’s another unfortunate turn in the career for Russell, who continues to bounce around the Association, unable to find a long-term home. The fit in Minnesota alongside good friend Karl-Anthony Towns had its moments, but Russell’s negatives popped up in the postseason when it mattered most. After being benched in crunch-time situations by head coach Chris Finch and not having his name mentioned in The Athletic’s recent story on new executive Tim Connelly, it wouldn't be shocking to see Russell playing elsewhere in 2022-23.

Even with the Pacers already having Haliburton and Chris Duarte, this feels like a spot where they could take a year-long look at Russell as a potential long-term backcourt piece. As a former top-three pick, Russell would bring more fanfare to the Pacers’ rebuild. And if he meshes well alongside Haliburton, Russell could become a long-term piece in Indiana and finally find a home.

From the Timberwolves’ point of view, this makes a whole lot of sense. Brogdon is a much better fit alongside Towns and Anthony Edwards, as he's easily able to slide into the No. 3 scoring role while providing an ideal complementary low-usage skill set. Taking a flier on Bitadze, a former top-20 pick, is also interesting, and as he could back up Towns.

As we’ve seen unfold late in the postseason, Miami needs to find another offensive creator. Simply put, the Heat need more weapons to compete with the NBA’s current juggernauts. Luckily for Miami, some much-needed flexibility could be on the way.

The Duncan Robinson contract looks like a disaster, but what if they could use his bloated salary and some future draft capital to bring in an immediate impact piece? Brogdon feels like the perfect remedy for Miami since he can take playmaking pressure off of Jimmy Butler, Tyler Herro and Kyle Lowry. Brogdon and Lowry could split minutes, which is a huge benefit for both players and would help keep them fresh and out of the training room.

For Indiana, they could be comfortable taking on Robinson’s contract with all of their salary-cap space currently available. Adding Strus and a draft pick could make this deal worth it for the Pacers.

All of a sudden, Miami is now in a strong position to make another deep postseason push with Brogdon onboard for 2022-23 and beyond.

Every team in the NBA needs shooting, defensive versatility and playmaking. Even with his injury history, Brogdon would be well worth the risk for any team looking to take the next step forward.

If Brogdon is able to stay healthy, adding him at this price could be a coup for whichever team is next after Milwaukee and Indiana.