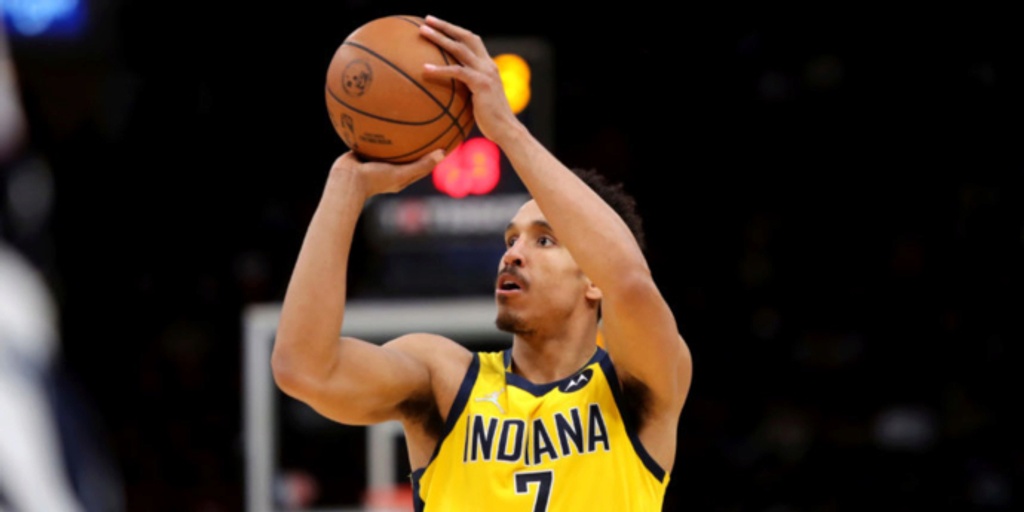 Five NBA players who feel destined to be traded this offseason

The 2022 NBA Draft is still two months away, but that’s when the dominoes around the Association begin to fall for player activity. In a shallow class of free agents, the trade market will be the best way for teams to make win-now moves. So many teams are in flux, stuck between pushing for the postseason or rebuilding. When scouring the potential trade marketplace, five names stand out from the rest.

The Tyrese Haliburton era is in full swing for the Indiana Pacers, which showed immediate long-term promise for a star-starved organization. With Haliburton in place as the primary building block for the Pacers, it’s time to say adios to the failed Malcolm Brogdon partnership.

Pacers GM Kevin Pritchard is on record as saying Haliburton is their point guard of the future, and he even compared acquiring him to former Indianapolis Colts quarterback Andrew Luck. If that doesn’t say they’re all-in on Haliburton, then I don’t know what to tell you.

Although Brogdon put together career-best scoring numbers during his time in Indiana, availability continued to be a serious problem for the veteran combo guard. During the 2021-22 campaign, Brogdon missed 46 games due to nagging injury issues.

Another interesting angle to monitor from the Pacers’ point of view is losing a first-round pick they expected to receive via the Caris LeVert trade back in February. After the Cavaliers’ collapse post-All-Star break, Indiana lost out on a top-20 pick they were planning on using for further draft ammunition.

Moving Brogdon would help recoup that asset, now deferred to next season. Brogdon’s trade market could be robust thanks to his two-way versatility, despite his injury woes.

If there’s any player in the Association who feels like a lock to be dealt, it’s Brogdon, thanks to the Haliburton era beginning in Indianapolis.

Christian Wood is seemingly on the way out in Houston. The Rockets’ rookie big man Alperen Sengun shined in a limited role, which increased later on as Wood’s minutes diminished. Wood was shopped by the Rockets before the trade deadline, but they weren't able to move him. That may change this offseason.

As an expiring contract making only $14 million, Wood offers any contender a ready-made stretch four who provides intriguing upside. For Houston, there’s no reason to keep Wood around. He simply doesn’t fit their timeline with a young core spearheaded by Jalen Green, Kevin Porter Jr. and Sengun.

Wood originally signed with the Rockets to be a pick-and-roll partner with James Harden, but Harden is no longer with the team. With a potentially fresh opportunity on the horizon, Wood has the chance to cash in if he lands in the right situation.

One team who continues to make sense for Wood as a long-term fit is the Miami Heat. Miami reportedly offered the Rockets Duncan Robinson for Wood, which Houston rebuked. With the Heat’s 2023 first-round pick now available, could that change the Rockets’ mind on this swap? If Houston can offload Wood while obtaining a sharpshooter and a future first, it makes way too much sense.

Whether it be Miami or elsewhere, Wood’s market has the chance to catch fire in a few months. He feels like another shoo-in to be on the move.

CHRISTIAN WOOD ARE YOU SERIOUS!

39 POINTS AND THIS RIDICULOUS SHOT 😱 pic.twitter.com/rqWDA2NS4z

Another player who has been stuck in trade rumors for the past calendar year is Jerami Grant, who bet on himself and signed a long-term deal with the rebuilding Detroit Pistons. Grant sought out a role where he would be more of a focal point offensively, and he’s shown now over a large sample size he can get it done in that area.

However, Grant’s best fit for any contending team is how he was used with the Denver Nuggets. As a third or fourth option who also handles the best scorer on the defensive end, Grant would fit onto any team looking to take a significant leap forward next season.

Grant is another player who doesn’t fit the timeline of his current team. With the Pistons projected to have another top pick in this year’s draft, plus an enticing young core led by 2021 No. 1 overall pick Cade Cunningham, the youth movement is in full effect in the Motor City. The Pistons would be wise to shop off Grant to the highest bidder around the draft or in early July.

Grant’s elite versatility provides him a strong role anywhere he lands. And don’t be shocked by the price tag for a Grant trade this offseason. Contenders will get into a bidding war to secure the services of a strong plug-and-play wing who will raise their ceiling immediately.

What’s next for the Atlanta Hawks? After a disappointing first-round exit in the postseason thanks to the Heat, Atlanta’s roster has a few interesting decisions looming ahead. One of those revolves around dynamic power forward John Collins, who has continued to hear his name floated in trade rumors since signing a five-year extension last offseason.

Collins let it be known this season he was frustrated with his role on the offensive end, and soon after we once again heard trade winds blowing around the former Wake Forest Demon Deacon. If the Hawks begin fielding offers on Collins this offseason, expect Atlanta to net a significant asset (or assets) in return.

Trae Young is obviously the straw that stirs the drink in Atlanta’s system, but take a look at all of the young pieces in place within their organization: Onyeka Okongwu, Kevin Huerter, DeAndre Hunter, Jalen Johnson, and you can even throw in the more experienced veteran in Bogdan Bogdanovic to the mix thanks to his strong fit with Young. Huerter already signed his rookie-scale extension, but Hunter and Okungwu will soon be due. The same goes for Bogdanovic, if he wants to stay in Atlanta past the 2022-23 season.

From a financial standpoint, Collins feels like the easiest piece to move in order to keep everyone else intact. Don’t be surprised if the Hawks use Collins’ contract alongside Danilo Gallinari’s expiring salary ($21.4 million) to go star hunting.

What a disaster this season was for the New York Knicks. After a surprising surge in the 2020-21 campaign, the Knicks felt inclined to run it back with their veteran-heavy core. Looking back on it now, that decision has left egg on the face of New York’s front office.

After winning Most Improved Player, Julius Randle may have been the winner of “Most Disappointing Player,” if such an award actually existed. Randle seemed out of it for most of the season, not utilizing his special motor to help the Knicks consistently. Whether Randle’s incredible run was a flash in the pan or the fit has worn itself out, something has to give this offseason.

We should also note the emergence of former lottery pick Obi Toppin, who continued to flash when given more playing time for the Knicks. Toppin makes Randle more expendable, and that should be the primary plan for New York this offseason.

Randle’s contract is very movable, too. Making $26.1 million next season, Randle would help present a strong trade market for New York to scour for the best offers. And who knows? Maybe Randle bounces back to his 2020-21 form in a different environment.

For Randle and the Knicks, it’s in the best interest of both parties to split up.

While we're still a couple of months away from the trade market opening back up, there are plenty of big names who could be moved. These players should find themselves at the top of that list, as any of them would prove a huge boost for the organization acquiring them.