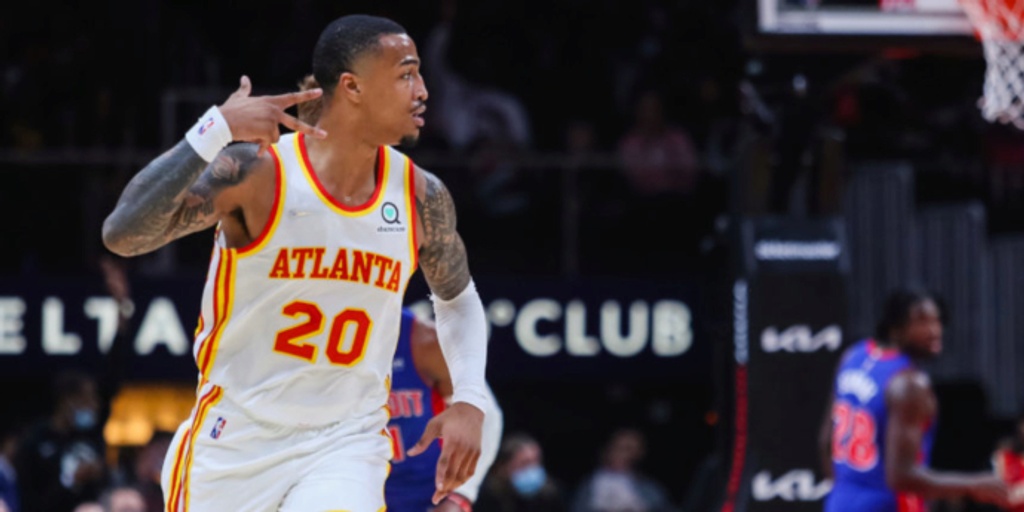 With rumblings surrounding the availability of Atlanta Hawks big man John Collins, BasketballNews.com's Evan Sidery and Nekias Duncan teamed up to come up with possible destinations prior to the NBA's Feb. 10 trade deadline.

John Collins is growing increasingly frustrated with his role. Carrying his lowest usage rate since his rookie campaign in 2017-18, Collins feels he's more than deserving of being a more featured piece within the Hawks’ offense. Even with Collins still only holding a 19.9 USG%, he’s averaging an impressive stat line of 17.0 points, 7.9 rebounds, 2.0 assists and 1.1 blocks at an above-average efficiency clip.

Collins is excellent at what he does for Atlanta, but would he look like in a different role elsewhere away from Trae Young?

He is only on the first year of his new deal, which drew lines in the sand during a tough restricted free agency period last offseason.

With extremely high expectations in Atlanta following its Eastern Conference Finals surprise, the team has been unable to clear the first bars. The Hawks already dealt promising young wing Cam Reddish to the New York Knicks in order to avoid paying him a big-figure contract. Meanwhile, if Collins is indeed available to the highest bidder around the Association, Atlanta could receive an extremely high amount of resources.

Below, Nekias and I dove into the film room, as well as five destinations that make the most sense for Collins in a trade scenario.

Collins has become one of the NBA's most versatile pick-and-roll partners. Because of his speed, soft hands and impressive vertical pop, Collins is able to sky for just about anything you throw his way after he rolls to the basket. And because of his improved shooting ability — he's converted north of 40% of his above-the-break threes in each of the past three seasons — you can't afford to completely sell out against rim attempts.

It's that combination of skills that makes him deadly. Pairing that with Young — a guy that can pull from 30, make every pass in the book, and #FloaterGang you to death — is patently unfair. It's unsurprising that trips featuring a Young-Collins ball screen has generated over 1.05 points per possessions over the last three seasons, per Second Spectrum.

Collins' quick-leaping ability also makes him a menace on the offensive glass when he's allowed to hover around the paint. The gradual decline in offensive rebounding has more to do with his positioning within the offense than some lack of instinct or physicality.

There are some questions defensively.

There are fewer questions to answer than in years past, to be fair. Collins' activity level and awareness have improved throughout his career. You could especially sense a shift from him during last year's playoffs, and that has seemingly carried over into this year.

Collins looks a little more comfortable on the perimeter, holding his own in switches and in the rare times the Hawks have asked him to trap this year. He has the feel needed to clean up messes as a weak-side helper, especially if he's allowed to roam against a non-shooter.

It's still largely unclear if Collins has made enough strides to serve as a primary rim-protector for extended periods of time. Among 75 frontcourt players that have defended at least 150 picks in drop coverage this season, Collins ranks in the bottom five in points allowed per Second Spectrum.

The added activity is nice, but he's still suffering from the too-little-too-much problem. Sometimes he's giving up too much of a gap, which allows the ball-handler or roll man (if he receives a pass early enough) to build momentum and launch into Collins' chest. Other times, he's playing the gap a little too high, which allows the big to get behind him for easy lobs.

It's fair to question how much of that is Collins trying to figure things out, and how much of it is him not trusting the point-of-attack defenders he's had to play with over the past couple of seasons. Let's be kind and say Young and Lou Williams leave quite a bit to be desired.

The boring answer: Collins has clear strengths and weaknesses, and a stronger defensive infrastructure could bring the best out of him.

Rumors continue to billow out of Sacramento right now pointing towards a massive roster overhaul soon in store. Everyone on the Kings, except reportedly De’Aaron Fox and Tyrese Haliburton, is available in trade talks. It shows the urgency is rising in Sacramento, and someone like Collins could be the perfect remedy.

This feels like a very fair trade for both sides, especially if Collins malcontents his way out of Atlanta. Barnes would provide beautiful floor-spacing acumen for the Hawks’ guards, plus Mitchell would be a bulldog defender who'd had heavy spot minutes alongside Young.

For Sacramento, it’s easy to sell yourself on the idea of switching things up and inserting a potential 20-and-10 machine in Collins. Haliburton would be spoon-feeding easy looks for Collins, plus Fox provides a steady scoring partner as well.

Resetting around a trio of Fox, Collins and Haliburton in Sacramento could actually be a fun scenario to watch unfold. And from Atlanta’s standpoint, this feels like a win-win deal in the short and long-term.

An intra-division trade, huh? With the way the Hornets have played lately, showcasing a complete turnaround on the defensive end, could they be positioning themselves to make a big push at February’s trade deadline. Don’t rule it out, because Charlotte’s upside is already massive with a young superstar like LaMelo Ball running the show offensively.

Nabbing Collins from Atlanta would cost significant assets, but the payoff could be absolutely massive. Could you imagine Collins and Miles Bridges catching lobs from Ball with reckless abandon?

For Atlanta, Oubre would fill a similar energizer role as Collins, but with much less consistency and pop. Oubre has flashed at times brilliance this season we saw from him during his years with the Phoenix Suns; could that jump be intensified playing with Young as his point guard?

Washington and Bouknight are two former lottery picks for the Hornets who simply haven’t been able to carve out a consistent role. If Charlotte decides the time is now, relinquishing these two enticing prospects likely is the going rate to seriously upgrade. Bouknight would provide a promising young building block who could turn into a 20-plus point-per-game scorer. Washington has the makeup similar to Collins where he can feast around the rim and pick-and-pops in Atlanta’s scheme.

I would grade this one as doubtful on the potential scale of realism, but the construct of this certainly makes plenty of sense on paper.

The Timberwolves are so much fun to watch when they’re clicking on all cylinders. Anthony Edwards and Karl-Anthony Towns have been the dynamite scoring duo Minnesota had hoped for. D’Angelo Russell is also finding his footing with the Timberwolves, showcasing a strong ability to bounce-back and fit within what’s required of him.

It’s long been known the Timberwolves have really been one more piece away from taking another serious jump in the Western Conference hierarchy. That’s why Ben Simmons has been floated around Minnesota for months now.

What about Collins landing in Minnesota to play alongside Towns, Edwards and Russell? It wouldn’t provide the defensive security blanket Minnesota is in desperate need of, but he makes an already scary offense absolutely terrifying.

The Hawks check plenty of boxes in this scenario where they send Collins off to Minnesota, bringing back an immediate impact scorer in Beasley, a super versatile rebounder with flashes of elite defense in Vanderbilt; plus, they would get a potentially beautiful backcourt fit with Bolmaro as a jumbo-sized playmaker. Throwing in some picks to the equation makes this so enticing for Atlanta as well.

This would be one to watch out for as a real fit for Collins, if it reaches that point in Atlanta anytime soon.

Portland is in an odd spot right now. Damian Lillard is out indefinitely due to an abdomen injury that has plagued him for a while. With the Trail Blazers far out of competing for a serious playoff push, especially with no Lillard, now is the perfect time to reset a little bit and try something different.

The pressure is on for the Blazers to find another competent scoring punch to keep Lillard happy in Oregon long-term. Could Collins be the answer here? It’s a very intriguing fit for both player and team. 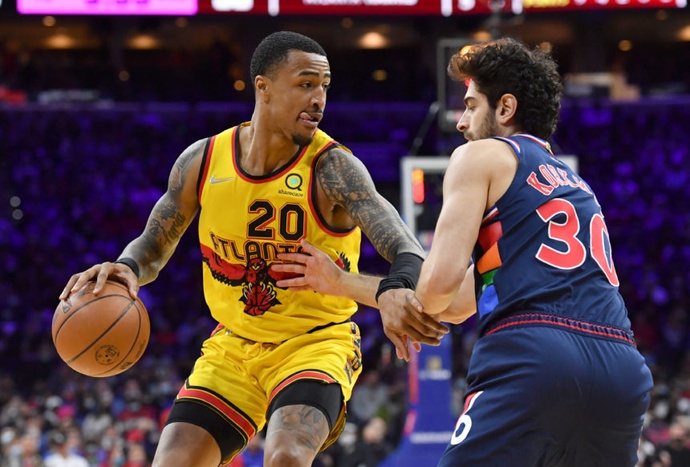 I have to admit, Collins teaming up with Lillard would be so much fun for everyone to watch. Instantly, Collins would provide an inside scoring jolt that’s been missing for the Blazers. Also, Collins would be feasting consistently playing off the gravity of Lillard and CJ McCollum.

For the Hawks, they would receive three pieces to insert into their frontcourt to replace Collins’ production. Nance would be a strong bounce-back candidate playing with Young as his point guard in Atlanta. Covington isn’t who he used to be, but can still provide winning attributes on a hopeful contender. Little is the wildcard who provides real intrigue here. Beginning to flash more consistently this season, could Little’s rise become a full-on ascension with the Hawks?

Another scenario where this feels like a win-win for both sides. Maybe Portland throws on some draft compensation to make the return more eye-opening for Atlanta.

The dots have already been connected around Collins to San Antonio. As Collins entered restricted free agency, the Spurs were the one team we continuously heard as a team who was seriously interested in pursuing him for a lucrative offer sheet.

San Antonio’s core has been overachieving a little bit this season, thanks in large part to Dejounte Murray becoming a key building block. It’s really almost a blank slate for the Spurs, so maybe Collins could be the piece to really augment another era of strong basketball in San Antonio?

White has been thrown around in trade rumors throughout his career, but his fit next to Young is nothing short of excellent. White’s all-around ability would cover up a lot of holes and help strengthen Atlanta’s backcourt depth. Walker is a home-run swing, but an athlete like that to catch lobs every game from Young could lead to some magic happening.

San Antonio has been floating around as a potential shocking buyer at the trade deadline, including its name being thrown into the Simmons sweepstakes. Collins would boost up a Spurs core in desperate need of another strong piece.

Collins would cause a feeding frenzy in the NBA, if the Hawks are indeed shopping him around to the highest bidder anywhere. The Hawks’ big man has displayed he’s deserving of a bigger role. Whether it’s in Atlanta or elsewhere, Collins would change the dynamics of a lot of organizations.