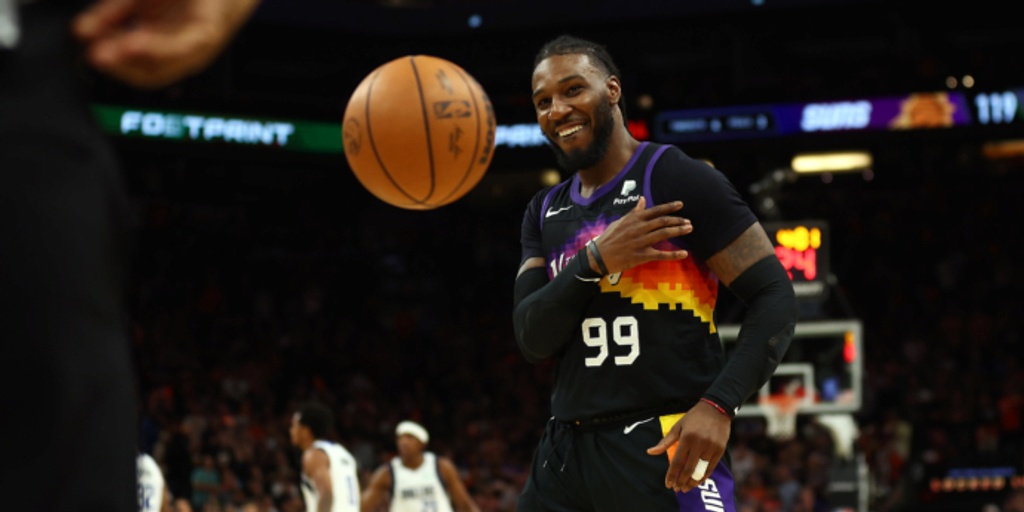 Jae Crowder seems ready to begin a new chapter away from the Phoenix Suns, which shouldn’t come as a surprise if you’ve followed his social-media activity throughout the offseason. From openly mentioning that he wants a fresh start elsewhere to liking tweets about him joining the Miami Heat or Dallas Mavericks, Crowder’s intentions have been out in the open for a while now.

This awkward tension potentially reached a boiling point on Friday night, less than a week from when Phoenix opens up training camp following their jaw-dropping postseason exit in the Western Conference Semifinals.

After the Arizona Republic's Duane Rankin tweeted about how the position battle between Crowder and Cam Johnson would be a key storyline to watch during training camp, Crowder tweeted (then quickly deleted): “99 WONT BE THERE!.”

Phoenix has reportedly been shopping Crowder in recent weeks, including in trade discussions with the Utah Jazz as the Suns targeted Bojan Bogdanovic, who was ultimately dealt to the Detroit Pistons in exchange for Kelly Olynyk and Saben Lee. Arizona Sports 98.7's John Gambadoro reported that talks between the Suns and Jazz broke down over the potential inclusion of Jarred Vanderbilt alongside Bogdanovic, but the deal would’ve involved Crowder heading out of the Valley.

With Crowder seemingly wanting to leave Phoenix, will a deal be struck before training camp opens on Tuesday? For a team looking to bounce back from postseason failure, it might not be the best idea to keep a disgruntled Crowder in the equation.

Although the veteran wing can be extremely volatile as an outside shooter, his winning tendencies and overall two-way presence would be a major boon for any contender around the Association.

Which teams make the most sense to pursue Crowder? Let’s go ahead and dive into some potential destinations.

Before injuries ravaged their roster last season, Chicago was nestled into the Eastern Conference’s No. 1 seed thanks to their well-balanced attack on both ends. Now, Lonzo Ball's future up in the air due to a nagging meniscus issue, the Bulls need to find some more help defenders who can hold their own. Right now, Crowder could be the ideal remedy when forecasting all of the elite score-first wings in the East.

Immediately, Crowder slides into an important slot for Chicago where he could benefit from a low-usage role similar to his current environment in Phoenix.

For the Suns, this type of haul should be the expectation in any potential Crowder-related transaction. If Bogdanovic was unable to net a first-round pick for Utah, it’s hard to envision Crowder topping that barometer either.

With the inconsistencies of Cameron Payne plaguing the Suns’ guard play last season, especially in the playoffs, taking a flier on White for the price of Crowder makes sense. Meanwhile, Green is a smaller version of Crowder but someone who could play a role off the bench and produce when called upon.

It's possible that Chicago would want a pick back in this trade since they are parting with the No. 7 pick in the 2019 NBA Draft (who is still just 22 years old), which could become a sticking point in negotiations.

If you’re a capable wing, there’s no doubt that Toronto will show some level of interest. The Raptors are building their entire identity around wings, and the results are really beginning to bear some fruit. Inserting Crowder within Toronto’s rotation would be a huge win, especially as a veteran mentor for younger players at his position like OG Anunoby and reigning Rookie-of-the-Year Scottie Barnes.

Phoenix has been interested in Young since last year, when a trade or buyout from the San Antonio Spurs seemed inevitable. Instead, Toronto acquired the veteran in exchange for Goran Dragic and a protected 2022 first-round pick. Young is a strong candidate to replace Crowder, because what he doesn’t provide in shooting he offers in spades everywhere else. Within head coach Monty Williams’ “0.5” system, he would thrive as a pass-happy connecting 4 who could play alongside Deandre Ayton or Dario Saric.

Flynn has been unable to find his footing in Toronto, but could get a long-term look in Phoenix off the bench. After Payne’s postseason woes, the Suns would be wise to find some competition heading into training camp.

It's possible that Toronto is content keeping Young, whom they just signed to a two-year extension. It all depends on how they value the 32-year-old Crowder and whether they think he's a big enough upgrade over Young to justify giving up Flynn.

Crowder’s top choice seems to be a reunion with the Heat, but the Suns have no real value to extract there. It’s doubtful that Miami would want to include Caleb Martin, who isn’t eligible to be traded for another few weeks anyway. Instead, the Heat will have to get creative if they want to bring Crowder back into the fold and rope in a third team to facilitate.

Well, guess what? One organization has openly expressed a desire to do just that, as long as they get back an enticing young prospect or a draft pick. Say hello to the Indiana Pacers’ new vision. They are expected to be one of the Association’s most active teams from now through February’s trade deadline.

Pacers president of basketball operations Kevin Pritchard recently told Basketball News that they want to keep stockpiling ammunition while taking advantage of their newfound salary-cap flexibility. Not many teams would be willing to take on Duncan Robinson’s contract, but Indiana is in the position to bite the bullet for another pick.

Quickly cobbling together a three-team deal with the Suns, Heat and Pacers, here’s a potential framework where all sides could potentially walk out happy:

For Phoenix, landing Brissett from Indiana is the right kind of flier to take. Consistently showing an improved offensive game, Brissett could shine in the Suns’ system, spelling Mikal Bridges and Cam Johnson off the bench. And with the Pacers wanting to have a large rotation to play as many young pieces as possible, Brissett’s role could be slightly reduced heading into 2022-23.

The Hawks have pushed their chips to the middle of the table this offseason when they swung for the fences by acquiring Dejounte Murray. With their star backcourt of Trae Young and Murray, Atlanta is in win-now mode so acquiring Crowder certainly makes a lot of sense. Not only would Crowder help take some pressure off defensively, he would be set up well by Young and Murray on the perimeter.

As evidenced by the Suns insisting that Vanderbilt be included alongside Bogdanovic in a potential trade with Utah earlier this week, it wouldn’t be a shock to see them try a similar method here with Atlanta.

Instantly, the Suns upgrade their third guard spot with Bogdanovic, plus they add a hard-nosed, versatile wing as well. Who knows if the price would be a first-round pick, but maybe Phoenix could pull this one off with multiple second-round selections because of Bogdanovic’s injury concerns over the past few years?

As ESPN’s Brian Windhorst relayed earlier this week, the Suns are willing to take on salary past this upcoming season. Bogdanovic has an $18 million player option for 2023-24, but his fit within the Suns’ offense would be well worth the price.

Based on the other packages, this feels like the best bet for Phoenix leading into training camp, and Atlanta would welcome a win-now addition into the fold as well.

All of the sudden, Cleveland looks like a real threat to make a deep postseason run. Thanks to the jaw-dropping addition of Donovan Mitchell earlier this month, the Cavaliers’ rotation is stocked to the brim going nine or 10 players deep. What about adding another piece like Crowder to bolster this strength even more?

Crowder could slide into a starting role for Cleveland ahead of Isaac Okoro because of his shooting ability or headline the second unit alongside fellow veteran Kevin Love. Assuming Crowder jumps into a starting spot, which seems to be his desire, here’s how the Cavaliers’ rotation would look:

With a rotation like that, it allows Cleveland to offload Osman and save some money on the backend for 2023-24. In Phoenix, Osman and Stevens would find roles within the second unit and benefit greatly from the spacing provided. The Suns covet shooters, so it wouldn’t be a surprise to see them utilize Osman off the bench, while Stevens plays a smaller role as wing depth.

Over the next 72 hours heading into media day and training camp, Crowder’s seemingly uncertain future in the Valley will be a story worth monitoring. We shall see whether Crowder stays with the Suns or heads elsewhere when the dust ultimately settles.