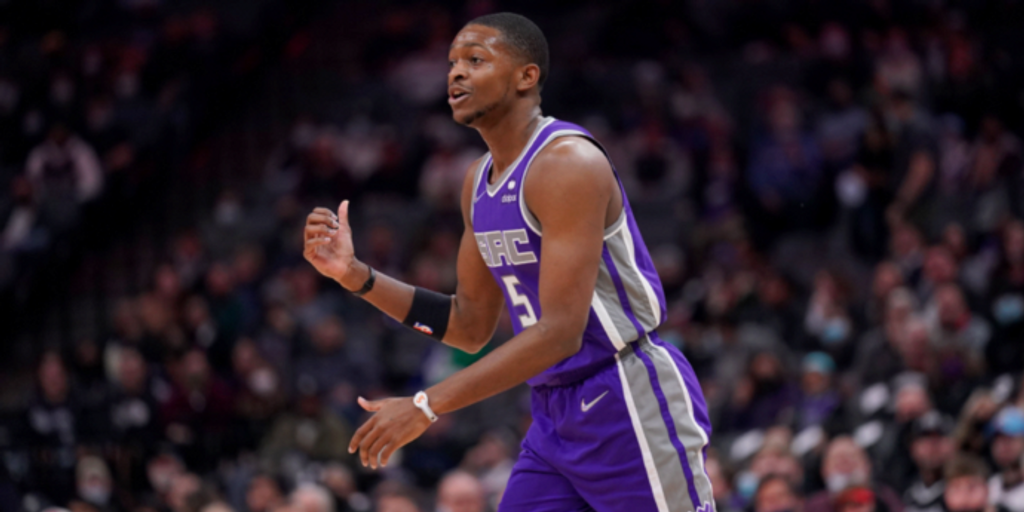 According to Yahoo Sports’ Chris Haynes, Sacramento Kings point guard De’Aaron Fox is one of the biggest names that could be available before next month’s trade deadline. Haynes mentioned that the Kings are receiving heavy interest in Fox and Tyrese Haliburton, but the plan internally is to build long-term around this backcourt combination.

Haynes spoke with Fox recently about his future in Sacramento among other topics.

“You definitely think about potentially being traded because we are struggling,” Fox told Haynes. “If you do have a change of scenery, it changes everything. I’ve been here for five years. I’ve built a life here, a family here. But once I’m on the court, all that is out the window. You’re not thinking about anything else than can happen outside of your control.”

Although Fox just signed a five-year rookie-scale max extension during the 2020 offseason, his fit alongside Haliburton has brought up serious questions about who Sacramento should actually build around in their backcourt.

As I wrote last month, Haliburton has a big enough sample size now to show he blossoms when he’s not next to a high-usage backcourt partner in Fox. When Fox was in NBA health and safety protocols, Haliburton showed a dazzling display of what his ceiling could potentially become as Sacramento’s No. 1 option.

In 42 games this season, Fox has averaged 20.9 points, 5.1 assists, 3.7 rebounds and 1.2 steals on a pedestrian 53.1% True Shooting percentage. Simply put, Fox hasn’t taken the developmental jumps the Kings’ front office hoped for when he inked a big-money extension. Fox is still a blur in transition, being a massive weapon in that area, but he still struggles to keep teammates involved consistently and put in complete effort on the defensive end.

Still only 24 years old, Fox has immense upside as a top scoring option in Sacramento or elsewhere. Could he be Devin Booker-like when it comes to defensive effort, once the Kings get a true contender around him? That’s the big question for both player and team, because Sacramento is once again going nowhere for another season.

At this point, it might be best for the Kings to trade Fox at his peak value while resetting a little bit around Haliburton in their backcourt.

If Fox actually isn't untouchable — something that has been mentioned by The Athletic’s Sam Amick — which teams make sense for him? Let’s dive into some potential landing spots for the score-first point guard.

This destination has been mentioned before as a potential blockbuster revolving around Fox and Ben Simmons, who continues to sit out games for the Sixers. So, why don’t we explore that possibility a little bit further?

Honestly, I love the idea of Fox in Philadelphia creating a lethal one-two combination with Joel Embiid. Also, I believe Fox and Tyrese Maxey can coexist in the same backcourt for Philadelphia.

Instantly, Fox would come aboard and bring a scoring jolt that’s desperately needed to take pressure off Embiid. On the other side, I’ve long been a fan of the idea where Simmons lands in a situation where he becomes the No. 1 scoring option.

How fun would a pick-and-roll combination of Haliburton and Simmons be in Sacramento? All around, this feels like a major win-win. We’ll see if Philadelphia and Sacramento are actually open to the idea, but this swap feels right for both parties.

When looking through the NBA standings, Indiana continues to stand out like a sore thumb when it comes to a team in desperate need of a reset. Rumors are picking up steam revolving around Myles Turner and Caris LeVert. Domantas Sabonis has also been mentioned around the league in potential trade talks.

Sacramento and Indiana could find common ground on a potential Fox deal, which could make a lot of sense for two teams who need a shake up. 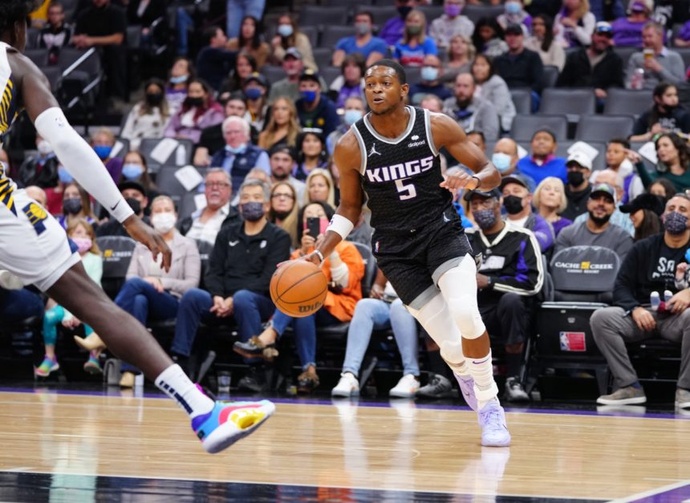 Yes, the Kings have Richaun Holmes, who is an average starting center in the Association. However, could you imagine the on-court synergy Haliburton and Sabonis could develop as a lethal inside-out combination? As we’ve seen in Indiana as well, there’s some spot minutes where Holmes and Sabonis could share the floor as well (though I honestly wouldn’t be a fan of that).

Fox would arrive in Indiana and be their star for years to come. He would be in a perfect situation to have a team built competently around him. Malcolm Brogdon would be an intriguing backcourt partner in this scenario too.

I’m very intrigued by this potential landing spot for Fox, so keep an eye out on the Pacers here.

Fox in the Big Apple? I love the sound of that. The question is: What would it cost for the Knicks to acquire him?

Honestly, unless the Knicks are willing to give up former No. 3 overall pick RJ Barrett, it likely won’t happen. I’m not a fan of Julius Randle in Sacramento, at least from the Kings’ perspective.

Fox and Randle would bring a potent pick-and-roll duo to New York. Meanwhile, Sacramento would acquire a young building block in Barrett who fits perfectly next to Haliburton. McBride has also shown unique upside, bringing aboard another backcourt piece who could play spot minutes with Haliburton down the road.

New York is in a tough spot after betting on running it back following a surprise playoff run last season. After stagnating, this could be the perfect move for the Knicks to make to expedite their win-now mindset with head coach Tom Thibodeau.

If the Knicks are open to trading Barrett for Fox, a big question mark currently, this could leapfrog right to the top of potential trade packages.

Boston is another team who seems poised for a major shake up within the next calendar year. Not taking a serious step forward this season, many questions are bubbling around whether the Celtics’ dynamic wing duo of Jayson Tatum and Jaylen Brown can coexist long-term.

If Celtics president Brad Stevens decides to pull the plug down the line and find peak value, Brown seems to be the more obvious choice. Tatum is locked in as the Celtics’ face of the franchise, so who could they find to be an ideal compliment with him?

Enter Fox, who brings backcourt competency for a team in desperate need of it like Boston.

Some might be asking why Sacramento is giving up draft compensation to Boston here, but, quite frankly, Brown has more value right now compared to Fox. And honestly, it would be a major win-win in the end for both teams.

Tatum and Fox would be a fun duo to build around in Boston, allowing more well-balanced roster construction. In Sacramento, Brown would enter as the go-to scorer with a great point guard to set him up in Haliburton.

This scenario might be more of a 2022 offseason scenario compared to the trade deadline, but crazier things have happened since both teams are stuck in neutral.

The pressure is on in the Bayou. Zion Williamson’s injury concerns continue to put a cloud over the Pelicans’ future. New Orleans EVP David Griffin is on the hot seat, so what can he do to save his job?

Why not push the chips all-in on a franchise building block in Fox? In head coach Willie Green’s system, acquiring Fox would be a brilliant move to make in the short and long-term. With Williamson out, Fox and Brandon Ingram would make a lethal scoring combination. And hopefully once Williamson eventually returns, the Pelicans would have their new Big Three set for years to come.

The Pelicans are loaded with future draft capital thanks to the Anthony Davis and Jrue Holiday trades. They own so many picks from the Los Angeles Lakers and Milwaukee Bucks, plus their own, which makes them a potential suitor in any star-level trade.

What would it take for Fox to land in New Orleans, though?

This trade doesn’t look too enticing on the surface for Sacramento, but if they receive a boatload of future draft capital from the Pelicans, it makes this scenario very appealing.

Resetting around Haliburton with ample draft picks for the future would be an ideal solution to hitting the reset button in Sacramento.

Luka Doncic needs help in Dallas, so where can the Mavericks find a player who can take pressure off of him? Enter Fox, who could really push the Mavericks’ ceiling to a completely new level.

Fox and Doncic would create instant fireworks in Dallas, playing on and off-ball with no issue. The offensive ceiling of this duo would be one of the best in the Western Conference.

The question is, do the Mavericks have enough to make a Fox blockbuster happen? 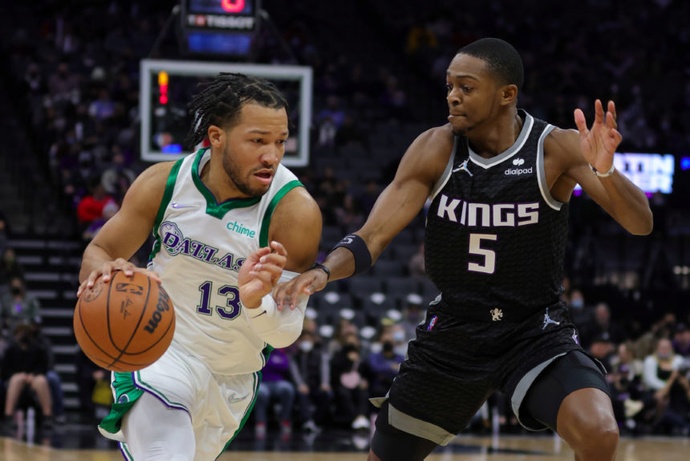 This trade is very interesting for a multitude of reasons. I considered a trade of Porzingis to the Kings, but would they actually want his contract? I doubt it.

That led me back to giving up a prized asset in Brunson, who is going to cash out as a restricted free agent this offseason. Why not get something now for Brunson instead of potentially letting him walk with a big offer sheet elsewhere?

Fox not only would be an upgrade over Brunson, but also form a Big Three that Mavericks owner Mark Cuban has been lusting after for years in Dallas. It’s a big bet to make locking in a core of Doncic, Fox and Porzingis together, but, if it works out, the ceiling is astronomical.

Sacramento would land future draft compensation to go along with an intriguing backcourt piece in Brunson. Also, Hardaway could be flipped elsewhere or kept around if the Kings decided to move Buddy Hield as well in a different deal.

This one was suggested to me by our own Nekias Duncan, which had me thinking about some potential scenarios. Fox and LaMelo Ball would be box-office levels of entertainment in Charlotte, so I totally get the idea.

However, what would the Hornets need to give up for Fox? Here’s where I eventually landed on that idea, which led to our biggest blockbuster yet.

Yeah, that’s a lot to take in. This could have been a lot easier if I believed the Hornets would trade away Miles Bridges in this scenario, but I don’t think that’s realistic. So, let’s chew on this eight-player deal for a moment.

Charlotte swaps out Rozier for Fox, an instant upgrade who elevates Charlotte’s playoff hopes for this season and beyond. It takes a midseason flier on Bagley, who is a restricted free agent at the end of this season. And Bagley could be a big-time beneficiary of being spoon-fed easy looks from Ball.

Sacramento lands two win-now veterans in Hayward and Rozier. Whether the Kings decide to keep him long-term or not is to be determined. The prize of this deal is the young players/prospects. Bouknight and Washington are former lottery picks who just haven’t found a consistent role in Charlotte. With the Kings, that would definitely change.

If the Kings indeed decide to shop Fox openly before the trade deadline, a league-wide bidding war will ensue. Yet to hit his prime, Fox has a lot of great basketball left in him. Wherever he would potentially land, Fox could change the immediate calculus for win-now possibilities.