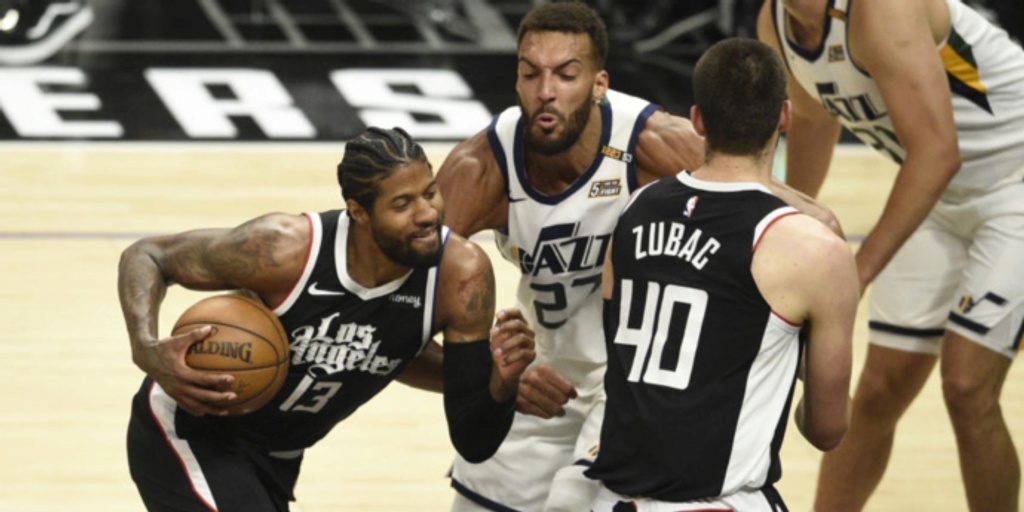 Everything you need to know before Game 5 of Clippers-Jazz

The Los Angeles Clippers tied up their series against the Utah Jazz by winning Game 4, 118-104. Everything was looking positive for LAC until news broke this morning of Kawhi Leonard’s ACL injury. Leonard is now feared to be lost for the season, and the Jazz have jumped all the way out to -360 to win the series at DraftKings Sportsbook.

Can the Clippers survive losing the Klaw and make this game interesting? Let’s take a look at who has the edge in Game 5 and find out the best bets for this playoff matchup.

(As a Basketball News reader you can get access to BetQL for 30% when you use the code BBN30, check out BetQL and win the rest of your bets for the playoffs!)

The Clippers finally looked like themselves in Games 3 and 4, with both stars (Paul George and Leonard) stepping up on both sides of the basketball. Now with Kawhi out, Los Angeles will need to rely heavily on PG to carry the load offensively. When it comes to gambling, the oddsmakers have made the Jazz as 7-point favorites tonight (and understandably so due to the news). Also, the line has moved almost 5 points since the injury information came out.

George has played well this series, averaging 27.3 points, 8.0 rebounds, and 4.3 assists a game. But, with Los Angeles heading to Utah, they will need at least a 30-spot from PG13 if they want to keep this game competitive.

Game 4 as a whole played out similarly to Game 3, with Los Angeles coming out and punching Utah in the mouth from the jump. The Clippers outrebounded the Jazz 44-39 and also won the turnover battle 10-to-11. Those are two key metrics the Clippers will need to try to win once again in Game 5 if they want to steal this game.

Overall, we have to throw a lot of the overall stats and what we’ve seen out the door because we now have a completely different series without Leonard.

As for the Jazz, they get to go home to their rabid fan base. Utah was the best home team in the league this year, and they averaged 2.8 more points at home this season than on the road. Their crowd definitely helped in their first two games of the series, and you can be sure they will be ready to go crazy in this one.

The Jazz go as Donovan Mitchell goes, and he’s been going alright. Despite hurting himself a couple of times this series, Spida has been unstoppable on offense. The Jazz guard is averaging 37.3 points during this series. He’s hitting 5.8 threes per game and shooting a scorching 46.4% from deep. This is just a bad matchup for Los Angeles as a whole and it just got a lot worse with Leonard out.

Utah is still waiting for the return of Mike Conley, which would be a huge boost for them as a whole, especially with Mitchell hobbling. Conley told reporters that he’s still holding out hope that he’ll be able to return during this series, so perhaps he’ll play in Game 6.

Matchup wise, the Clippers have found a lot of success with their small-ball lineup. But again, missing an all-world-caliber player in Kawhi changes things drastically. With that being said, Los Angeles is used to playing without Leonard, especially with his load-management rest days. The Clippers still have a ton of talent on that roster, but someone will need to step up in the Klaw’s spot.

One player to keep an eye on to fill those shoes is Reggie Jackson. The LA guard is one of the only players outside of George who can create his own shot, so look for him to have a green light tonight. He came up big multiple times in Round 1 against the Dallas Mavericks, so the Clippers will be hoping for him to recreate some of that magic.

The public is all over the Jazz in this game, with both the tickets and money around 75% on the home team. When it comes to the total, bettors are expecting a high-scoring game, with 55% of the tickets on the over.

Even if the Clippers are long shots to win this game, it’s possible that the line has moved a little too much to ignore LA in this spot. Everyone is counting Los Angeles out, making this bet a little more attractive.

BetQL’s NBA model has run 10,000 simulations of this game to provide insight on how the game will pan out, and after all those simulations, the model leans the Jazz -7.5. Currently, the point spread of this game sits at +/- 7.5 with the Jazz as home favorites. BetQL’s model would have placed the line at Utah -8.5, meaning there is some betting value on Utah in this game at -7.5. Keep reading below to get picks from the experts at BetQL.

The model is leaning toward the Jazz with a 2-star rating on the game, and projects the final score to be Utah 113, Los Angeles 104.5. According to the expert bettors they are backing the Jazz as of now, but be sure to check back with BetQL to see the most updated odds, lines, and spreads before tip. It's always good comparing analysis to the model to reduce bias.

LA won’t be able to produce the same output as they did in Games 3 and 4 and the Jazz are better at home defensively than they showed on the road.

Check out BetQL’s over/under picks for the rest of the NBA playoffs.

The BetQL computer model has identified a 4-star prop that we like for tonight’s matchup in Ivica Zubac under 6.5 rebounds. He’s averaging 4.3 rebounds a game against the Jazz and if the Clippers continue to go small, that will limit his minutes and opportunities.

Pick: We are backing the model and taking Zubac to go under his 6.5 rebounds mark.

As a Basketball News reader you can get access to BetQL for 30% when you use the code BBN30, check out BetQL and win the rest of your bets for the playoffs!