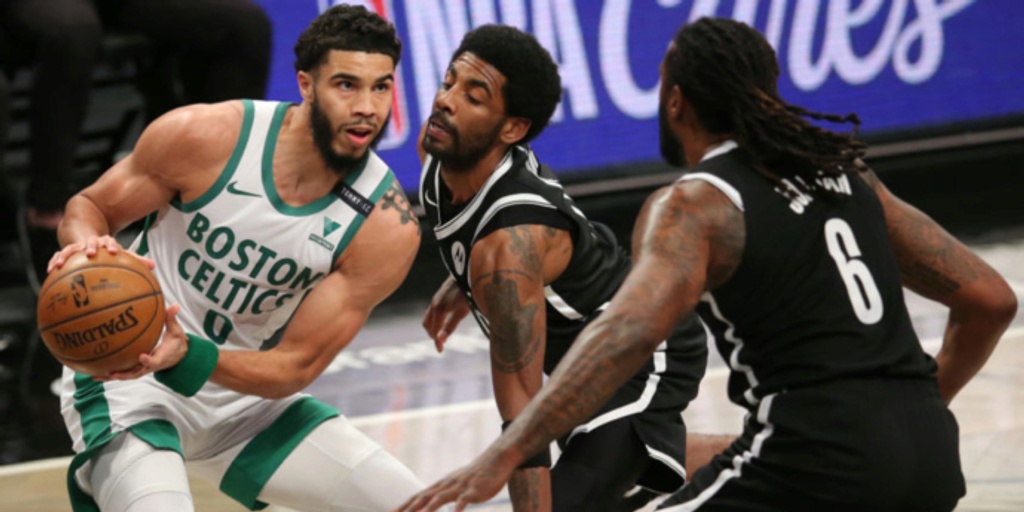 Everything you need to know ahead of Nets-Celtics Game 1

The NBA-championship favorites start their playoff run on Saturday when the Brooklyn Nets take on the Boston Celtics at the Barclays Center in Game 1 of the No. 2 vs No. 7 matchup.

Boston comes into this series as huge underdogs, with Brooklyn’s odds to win set at -1,430 at DraftKings Sportsbook. Will Boston be able to steal a game on the road?

Let’s take a look at who has the edge in Game 1 in the battle of Jayson Tatum’s Celtics vs. the star-studded Nets, and find out which way BetQL’s NBA best-bet model is picking in this game.

All season long, the Celtics have been spearheaded by their two young All-Stars in Jayson Tatum and Jaylen Brown. Unfortunately for Boston’s title aspirations, Brown was lost to a season-ending wrist injury. That leaves Tatum to carry the load in a first-round matchup against one of the best teams in the NBA.

Tatum has been holding his own since Brown went out and comes into this game firing on all cylinders. The young star has scored 31.2 points per game over his last nine outings and he's coming off of a 50-point performance against the Washington Wizards in the play-in game.

On the flip side, the Nets have three of the best basketball players on the planet in Kevin Durant, James Harden, and Kyrie Irving. Their biggest issue this season has been the health of their three big guns. Will chemistry be an issue since they've barely played together this season? It's a small-sample size, but the Nets are 6-2 this season with Durant, Harden, and Irving all in the lineup.

Defensively, the Celtics are better than the Nets in several key metrics. Boston is 11th in points allowed and 14th in defensive rating compared to Brooklyn, who ranks 21st and 22nd in those areas. The Celtics also do a great job at rebounding the basketball and limiting assists, ranking sixth and ninth in those categories, respectively.

Boston also gets the nod here when it comes to the coaching matchup, with the more experienced Brad Stevens going up against rookie coach Steve Nash. While the former-MVP has done a great job of steering the ship for Brooklyn, there’s something to be said about a coach's playoff experience.

Matchup-wise, Tatum is going to get his points, but can someone else on the team step up to help him? Kemba Walker had a big game in the play-in, scoring 29 points and providing the spark that Boston needed to advance. He’s come on as of late, averaging 29.8 points over his last four games.

The team will need both Tatum and Walker to have big nights if they want to keep up with the firepower of the Nets, who rank first in offensive rating and second in points scored. Brooklyn also ranks first in eFG%, per Cleaning the Glass.

The game plan for the Celtics is going to center around their backcourt, but they are going to need to slow this game down and win on the defensive end to have a shot. Boston will also need to be physical on both ends of the court and muddy the game up a little to keep it within reach.

Don’t be surprised if Boston hangs around, at least in Game 1. There’s no pressure on them to win and everyone is expecting this one to be a blowout, bettors included. Over 77% of the bettors are laying the points with Brooklyn as of Friday evening.

Look for the Nets to treat this round as a warmup for their postseason run and work out some rotational kinks early. It’s a common trend among elite teams, with the Lakers losing their first game of the postseason last year as well.

Tatum should be able to keep his scoring spree rolling and he’s averaging 29.7 PPG against the Nets this season. There’s no reason to think Brooklyn will be able to slow him down on Saturday night. Give me the Celtics plus the points.

BetQL’s NBA model ran 10,000 simulations of this game to provide insight on how the contest will pan out, and after all those simulations, the model agrees with my pick and likes the Celtics in this spot. Currently, the point spread of this game sits at +/- 8 with the Nets as the heavy favorite, but BetQL’s model would have placed the line at Nets -5, meaning there is some betting value on the Celtics in this game. Keep reading below to get NBA computer picks for tonight’s game from the experts.

The model is leaning toward the Celtics +8 with a 4-star rating on the game, and it’s hard to argue with the model on this pick as I stated above. The Nets are the favorites to win it all, but haven’t played many games as a cohesive unit. Because of their big games and the public being all over the Nets, the line is slightly inflated when comparing it to the model.

We are backing the model and betting the Celtics +8, but be sure to check back with BetQL to see the most updated odds, lines, and spreads for this game before tip.

The over/under for this game is set to 228 points. The BetQL model recommends taking Over 228 for this game. Although unders are usually a great bet early in the playoffs, we don’t foresee either one of these teams playing tough defense the entire game. With Durant, Irving, Harden, and Tatum all on the court, any one of these guys could put up 40+ points. I am backing BetQL’s over/under pick and taking the over.

Unfortunately, the prop bet lines have not been released yet so you will have to check back with BetQL before tip off here, but the prop we will most likely have our eye on is Jayson Tatum over/under points, which will most likely be somewhere around 30.5 points. If you think the Celtics will be able to contend in this game, you would think Tatum has to score 30+ points. Tatum averaged 29.7 points per game in April, and 26.5 points per game in May, which included an outlier game in which he only scored 9 points.

Since this is a playoff game, Tatum is likely going to get more minutes and shots than usual, so we would recommend betting over 30.5 points for Tatum. Don’t be scared if the prop seems like it won’t hit at halftime, Tatum is a second-half scorer and we believe he will get over that 30.5 number.