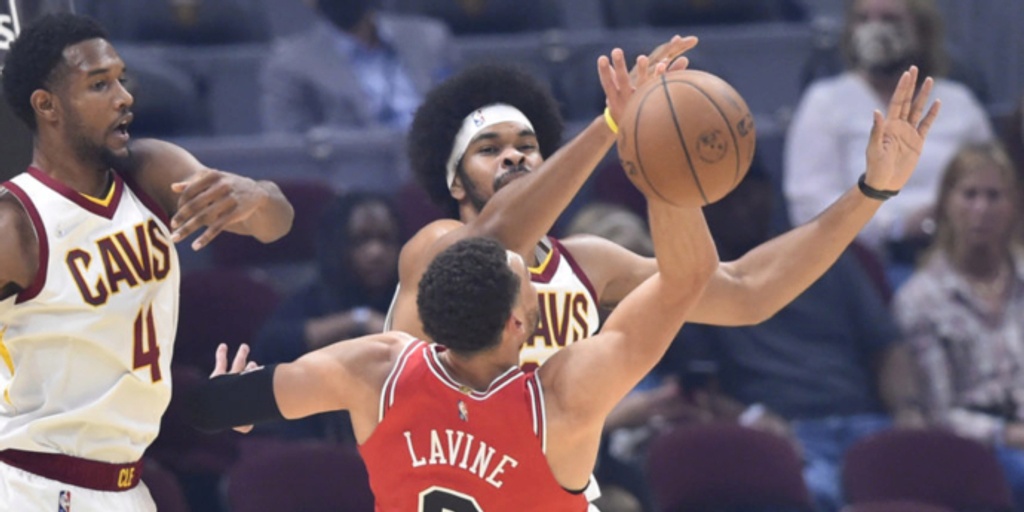 As the rest of the NBA continues trying to zig into the small-ball revolution put into place five years ago by the Golden State Warriors, another organization is zagging in an entirely different direction. So far, the results look spectacular for long-term success.

The Cleveland Cavaliers have built a solid foundation of key players within their young core — Evan Mobley, Darius Garland, Jarrett Allen, Collin Sexton, Isaac Okoro and Lauri Markkanen — but we will focus solely on a unique big-man duo who could finally help them escape the fruitful LeBron James years that have long passed.

Mobley, the No. 3 overall pick from the 2021 NBA Draft, looks the part of a future superstar in the making following a similar path as Anthony Davis and Kevin Garnett did before. An uber-athletic multi-positional player with exceptional instincts, Mobley’s transition as a rookie has been relatively easy. Averaging 13.6 points, 7.9 rebounds, 2.6 assists, 1.4 blocks and 1.3 steals per game while carrying a 55.1% True Shooting percentage, Mobley is showcasing why he was tabbed in the draft as one of the most seamless fits at the NBA level, with an extremely high baseline for a floor outcome. As Mobley continues to grow into his body, Cleveland’s ceiling will continue to rise. And the Cavaliers have actually looked very competitive early on, which forecasts them potentially being a team who eclipses their preseason over/under win-total projection.

Alongside Mobley in the frontcourt is Allen, a light-hearted 6-foot-11 center with a throwback afro. Allen was stolen away by the Cavaliers when they were involved in the James Harden mega-deal last season. Ever since, Allen has thrived for Cleveland, earning himself a long-term extension that will pay him $20 million annually over the next four years. With the way Allen continues to grow on both ends of the court, his contract will soon fall into the category of “steal” around the Association in no time.

When Cleveland drafted another big man to go next to Allen, the long-term vision was to suffocate opposing offenses with immense length and versatility. Mobley and Allen are really the first duo of the like to produce positive results. Another example in Indiana revolving around Domantas Sabonis and Myles Turner still has looming questions four years later, leaning so close to an eventual move shipping out the latter at February’s trade deadline.

Unlike the Sabonis and Turner pairing for the Pacers, Mobley and Allen are perfect complements for one another in Cleveland. Neither one can necessarily be played off the court thanks to their innate instincts and ability to stay out of foul trouble. And if your team plays small against this duo, expect to be crushed. Monday night’s upset win for the Cavaliers against the upstart Charlotte Hornets was the perfect example, because Cleveland’s giants had their way early and often throughout.

In 152 minutes this season where Mobley and Allen have shared the court, Cleveland holds opponents to only 98.1 points per 100 possessions. In terms of team defensive ratings, that would rank Cleveland at No. 2 behind the Miami Heat (95.1). The Cavaliers’ preseason hypothesis of creating an elite infrastructure on defense centered around this duo has been deemed successful, albeit in a small sample size. However, based off the eye-test, there’s no reason why these numbers should regress.

The one area where this pairing lacks is offensive efficiency. The Mobley-Allen minutes score 94.0 points per 100 possessions, which ranks last around the NBA in overall team-related offensive metrics. There’s hope on this end, though. Mobley has already flashed on multiple occasions true superstar equity this early on in his career. If he reaches a Davis or Garnett-like tier down the road, these offensive woes won’t matter in Year 1.

Another feather in the cap of Cleveland’s long-term hopes is its offensive backcourt built around high-usage and three-level scoring headlined by Darius Garland and Collin Sexton. Having not been signed to a rookie extension, Sexton is in a contract season — he'll enter this summer as a restricted free agent. But Garland is a candidate to receive a hefty payday this offseason with a multi-year rookie extension. For the three-man lineup of Garland, Mobley and Allen, it actually carries a positive net rating, outscoring opponents by 1.0 points per 100 possessions (101.0 OffRtg, 100.0 DefRtg). Among three-man units for Cleveland, this is the only combination that produces better than 0.0.

Here’s the current age for the Cavaliers’ entrenched long-term trio they’re building around: Mobley (20), Garland (21), Allen (23). Cleveland is set up beautifully to be competitive throughout this season, then potentially make the real jump forward in 2022-23.

All that’s missing in Cleveland is a wing scorer who can take some future burden off of Garland and Mobley. Right now, the Cavaliers are testing out how Markkanen and Okoro look alongside their gigantic rim protecting duo. So far, the results have been a mixed bag. Markkanen has looked much better defensively, but a lot of it is due to playing heavy minutes next to Mobley and Allen. On the other hand, Okoro adds even more defensive chops, but his offense, especially on the perimeter is nearly nonexistent. Making matters more difficult, he's been sidelined with a hamstring injury for the past four games straight. This season will be an evaluation period for the both of them, which should eventually help Cleveland decide what to do here.

(Luckily for Cleveland, Cedi Osman has filled in admirably as a scorching 48.4% three-baller who has looked more than capable as a rotation wing. Lamar Stevens doesn't quite bring the offensive punch, but the team trusts his defensive capabilities and physicality as well.)

If the Cavaliers make an aggressive move this offseason to find their wing of the future to pair next to Garland, Mobley, Allen and potentially Sexton in the starting lineup, they are going to quickly become a team that consistently makes playoff noise over the years. That looks to be the current missing ingredient in the kitchen, but the process of getting everything out of the bag and put together on the table shows true promise for creating a spectacular five-star dish.

The main reason why? The uniquely-gifted frontcourt duo of Mobley and Allen looks like it will thrive together within the modern small-ball, pace-and-space era. It’s a rarity, but one that Cleveland is more than ready to use to its advantage.