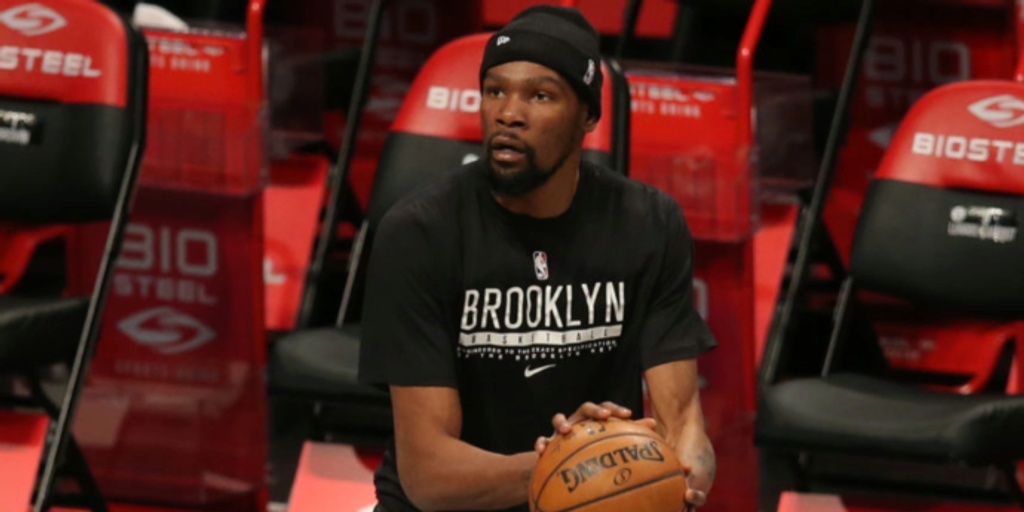 Rapaport released images of the private messages Tuesday on his Twitter account, and they included homophobic and misogynistic language from the Brooklyn Nets star.

“I’m sorry that people seen the language that I used,” Durant said. “That’s not really what I want people to see and hear from me, but hopefully I can move past it and get back out on the floor.”

The NBA hasn't weighed in yet on Durant's comments and whether he would be fined. Brooklyn coach Steve Nash said the team has discussed the remarks but would keep the conversation internal.

Durant is nearing a return from a left hamstring strain that has sidelined him since mid-February. He could be back sometime next week.

He and the Nets thought the injury was minor when he missed his first game Feb. 15 in Sacramento. But a subsequent exam showed it to be more serious.

“So, one of those things where I’m not feeling a ton of pain, but it’s just like you don’t want to force one of these injuries, go out there and make it worse,” Durant said.

“In my mind I’m just like, ‘I can play,’ but then it’s also like you’ve got to be smart and cautious with this type of injury. So just try to be patient with it all and just rehab as hard as I can, and I’ve been through this situation before so I just try to take myself back to that place.”

Durant sat out the entire 2019-20 season, his first in Brooklyn, after rupturing his Achilles tendon playing for Golden State in the 2019 NBA Finals.

He, Kyrie Irving and James Harden have been able to play just seven times together since the Nets acquired Harden in January, but the team has rolled to first place in the Eastern Conference while Durant sits.

“I was playing solid before I got injured and feel like we were just starting to figure each other out, James, Kyrie and myself, and different lineups out there on the floor,” Durant said.

“I felt like we were starting to gain our rhythm and even though I was out a week before that with (health and safety) protocols, I felt like our team was gaining more chemistry then and that’s more so what I care about. How I play, I’ll figure that out over time whenever I get out there.”