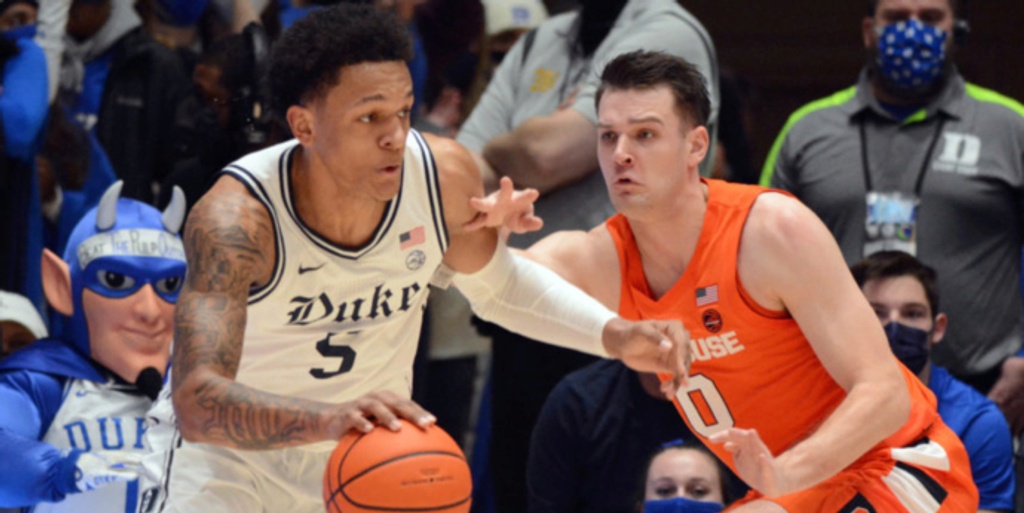 Duke gets back on track, routs Syracuse 79-59

After a one point, overtime loss to Florida State, Duke aimed to get back on track at home. The Blue Devils (15-3, 5-2 ACC) are currently ranked No. 6 nationally thanks to an offense led by star freshman Paolo Banchero, and junior Wendell Moore Jr. Banchero is averaging 18.1 points and 7.6 rebounds per contest, making a strong case to be the No. 1 overall pick in this year’s NBA draft.

Syracuse (9-10, 3-5 ACC) have had a tumultuous start to 2022, losing four of their first six games. Senior Buddy Boeheim is fourth in the ACC in scoring at 19.2 points per game, and Villanova transfer Cole Swider, has been impactful on both ends averaging 12.7 points and 7.1 rebounds.

Three-point shooting made all the difference in this one. With Trevor Keels out due to injury, Duke connected on 14 out of 37 shots from deep, while Syracuse hit 5 of 28. Potential top-10 pick AJ Griffin, led the charge with 5 threes. Moore Jr. had a terrific game with 15 points, 8 assists, 6 rebounds and 2 steals.

Duke got started early, jumping out to a 16-6 lead behind multiple three-pointers from Griffin. Syracuse responded with a 9-0 run on a handful of Jesse Edwards buckets. With the combination of Duke’s efficient ball movement and shooting, and Syracuse’s turnovers and struggles from deep, Duke held a halftime lead of 36-22. Griffin led all scorers with 12 points (4-6 3FG) at the break. Duke had 13 assists on 13 made field goals.

The Blue Devils started the second half on a tear and ran away with this one, at one point extending the lead to 31. Banchero and Mark Williams were simply too much to handle on the interior. Williams finished with 15 points and 7 rebounds on 6-7 shooting from the field. Banchero posted a dominant double-double with 15 points, 13 rebounds and 4 assists.

Syracuse’s 6-foot-11 sophomore, Jesse Edwards, was a bright spot for the Orange. He battled inside and finished with 12 points, 9 rebounds, 2 blocks and 4 steals. Jimmy Boeheim also played well, scoring 12 points.

Moore Jr. said after the game, “It started with ball movement. We were ready to shoot, total team effort.”

Duke will host Clemson on Tuesday.

Syracuse will travel to Pitt on Tuesday evening.