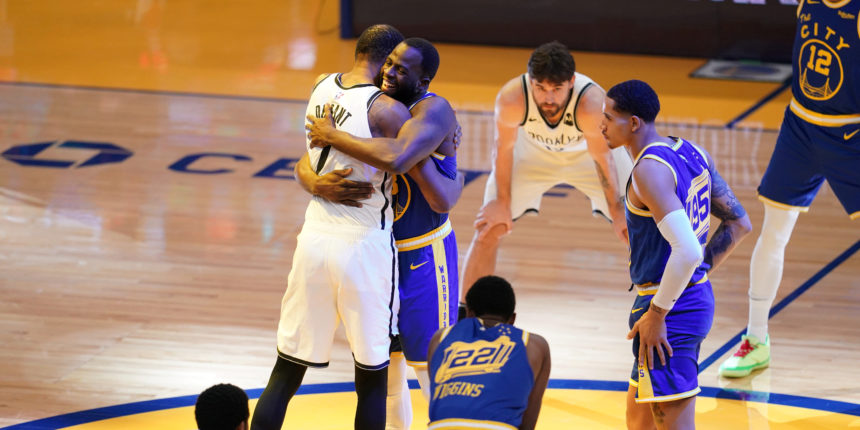 Draymond joins KD's podcast to talk recruitment, their past and today's NBA

Draymond Green and Kevin Durant are back in the news, but this time it comes after Green appeared on Durant's podcast, The ETCs with Kevin Durant.

Considering their past as teammates in Golden State, Green's recruitment of Durant after the Warriors lost to the Cleveland Cavaliers in the 2016 NBA Finals, their on-court arguments and viral moments, the two obviously had plenty to chat about.

There have been plenty of stories and controversies involving this pair, dating all the way back to the night the Warriors lost Game 7 and a 3-1 series lead to the Cavs in the Finals four years ago, when Green reached out to Durant about joining the Warriors as his free agency was about to begin.

Green and Durant agreed that there were texts exchanged after the game, but also added in that the story has been spiced up a bit in recent years.

“Y’all added a theatrical sense to make this shit a movie," Green said on the podcast. "You gotta make shit for TV, you gotta add on a little, so people just start pouring on. I wasn’t about to come out and fight it."

Green and Durant also chatted about the infamous argument they got into during a game in Durant's last season with Golden State against the LA Clippers. (Many seemed to peg that as the beginning of the end to Durant's time in the Bay Area). They also looked back on the time Durant didn't get the ball at the end of regulation in a tied game against LA, when Durant yelled at Green about not getting the ball -- and prompted Green to respond: “Hey, m*****f***** I do this, too! I was going to give your ass the ball if you weren’t bitching! I do this, too!”

Green also added in his opinion on today's NBA that's filled with players born in a different generation than his.

Draymond Green on Kevin Durant's "The ETCs" podcast: "They soft as hell. I've found myself trying to talk sh*t to some of these young dudes that won't talk. And they're like trying to be a friend. That's what these young dudes do nowadays. I don't understand it."