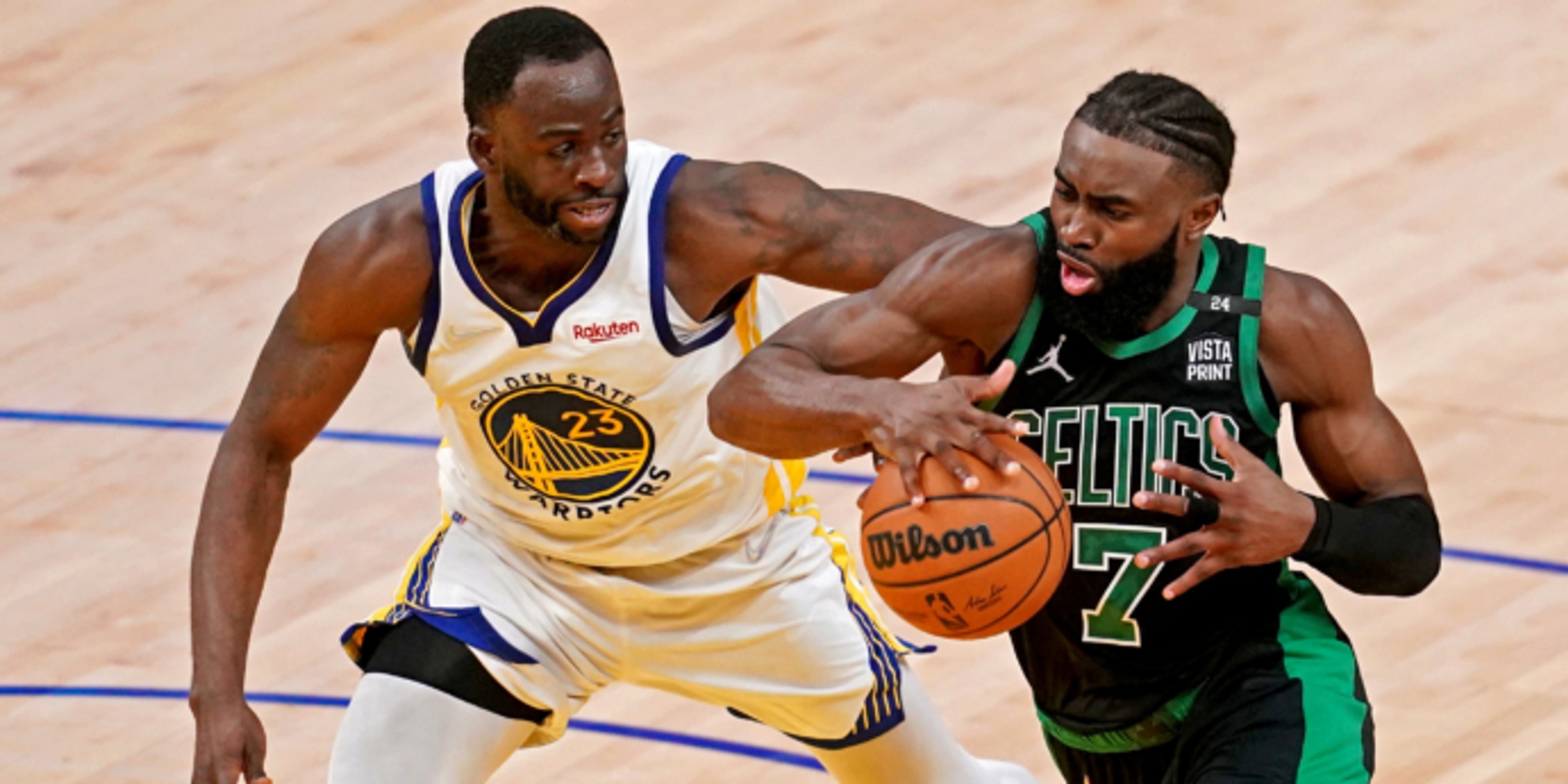 Draymond Green was not having a good NBA Finals by his standards. His play had seemingly fallen off a vertigo-inducing cliff, averaging just 4.3 points on 23.1% shooting in his first four games. As such, his podcast, "The Draymond Green Show," which Green records after each and every one of his performances, quickly became a storyline and drew ire from fans, media and former players — all of whom labeled the show a distraction.

Green quickly put all of that to rest in Monday's Game 5, a bounce-back performance in which he posted 8 points on 3-of-6 shooting, 7 rebounds and 6 assists. His efforts were instrumental in Golden State capturing the 3-2 series advantage against Boston, and the Warriors now have the opportunity to close things out tonight in Game 6.

Golden State held Boston to just an 80.0 offensive rating in the halfcourt in Game 5. Green, of course, played a massive part in that as the raucous quarterback of Golden State's swarming defense. With him on the floor, Boston scored at a minuscule rate of 83 points per 100 possessions; off it, the Celtics' offensive rating rose to an astounding 122.2 points per 100 possessions.

"His defensive force the past two games has just been devastating," Steve Kerr said on the Bay Area radio station 95.7 The Game.

Challenging Draymond at the rim, or really anywhere on the floor, was a fool's errand. Boston shot just 11.1% when Green was the nearest defender in Game 5 — a full 37.9% drop from the 49% the Celtics shot against Golden State's other defenders.

His help rotations were simply vintage, 2.9-ing with perfection and refraining from rotating over too early (a problem earlier in the series) as the last line of rim defense, also known as the "low man." He did an excellent job using his low base to dislodge probing offensive players while keeping his hands raised high and straight to maintain legal verticality.

Golden State's coverage on Jaylen Brown in Game 5 may very well have swayed the series in their favor. Up to that point, Brown had been having an outstanding Finals, averaging 22.3 points on 44% shooting through the first four games. The Warriors opted to send Brown left at all costs and shaded him away from his preferred right-handed driving lanes. Green was every bit a key part of that strategy.

In the first clip, he takes the assignment head-on and sends Brown left, and Boston's star wing fumbles the ball while placed in an uncomfortable situation. In the second clip, it's Stephen Curry who is shading (or "weaking") Brown to his left after the switch, and when Brown attempts to cross back to his right, Draymond is in his path to delete the driving lane down the middle. A pull-up 15-footer with very little rhythm is a result the Warriors will certainly live with.

But maybe more importantly, Green matched his defensive intensity with production on the offensive end. For the first time all series, Draymond appeared genuinely interested in actually scoring at the basket and was noticeably more aggressive with the ball in hand. Green galloped to the rim when Derrick White pressed him tightly at halfcourt (which, huh?). Earlier in the game, Green and Klay Thompson connected on a near-telepathic read that only the seasoned Warriors could display, with Green faking the dribble-handoff to Thompson and rocketing toward the basket for the dunk when Boston overplayed the action.

Boston's defense on Curry has been a major storyline in the Finals. They've mostly elected to run a shallow drop coverage against Curry, a measure of faith in Marcus Smart and Derrick White's screen-navigation abilities. But it's also a safeguard against putting Green in advantageous situations as a short roller who can pick apart defenses by making the opportune pass when given the 4-on-3 advantage after Steph is blitzed.

Here, we get an example of what that looks like. Brown tries to neutralize Golden State's side pick-and-roll with ICE coverage, and when Curry dribbles down the sideline, Brown and center Robert Williams III attempt to trap Curry and pin him there. A flashy behind-the-back pass finds Draymond, who heaves a crosscourt dime to Andrew Wiggins when Smart comes over to tag the roll. Though Wiggins misses the shot, this was a great look and one of Green's 10 potential assists on the evening.

Warrior fans should be encouraged by how reenergized Draymond looked in the open floor. Golden State had a pretty abysmal showing by their standards in transition, scoring just 12 fastbreak points on Boston's 18 turnovers. Green was responsible for 4 of those points, showcasing his impressive court vision on hit-ahead passes while also taking the ball up full court as a true blue point-forward before spraying dimes.

"He got us going early with his pressure and his heart and getting up and down the floor," Klay Thompson said after the 104-94 victory.

"Draymond is the heart and soul of this team."