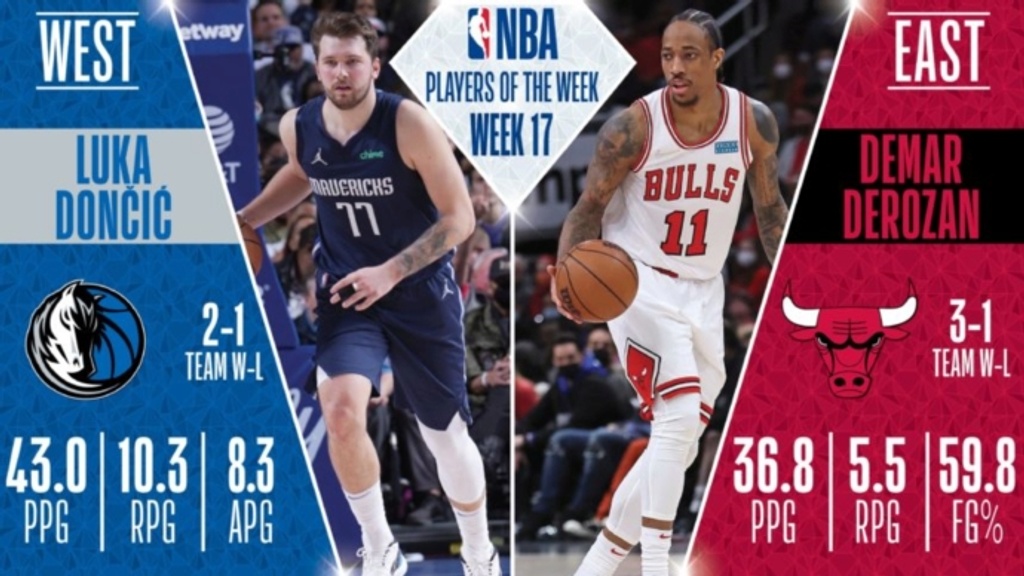 Doncic, DeRozan named Players of the Week for Feb. 7-13

The playmaking maestros in guard Luka Doncic and DeMar DeRozan caught aflame in their respective conferences, winning Player of the Week for Week 17 (Feb. 7 - 13).

DeRozan scored 35 points in each of his games for the Bulls as he led them to a 3-1 record with 36.8 points and 5.5 rebounds per game on a blistering 59.8 field goal percentage. The Bulls needed all 38 of his points along with 6 rebounds and 5 assists in a comeback win over the Thunder last Saturday.

DeRozan hit the tough bucket on Pat Bev and let him know he's too small 😂🔥 pic.twitter.com/hA4Agxvkrq

Doncic continued to take things up another gear to an extent that showed the Mavericks former teammate Kristaps Porzingis was unnecessary with 43 points, 10.3 rebounds, and 8.3 assists per game in a 2-1 week. Doncic's eyes lit up when he faced up with the Clippers yet again last Thursday with a season-high 51 points along with 9 rebounds and six assists against them in a 7-point win.

51 PTS last game, 45 PTS tonight 😱@luka7doncic is on a scoring tear for the @dallasmavs pic.twitter.com/gUx0R3NzFR