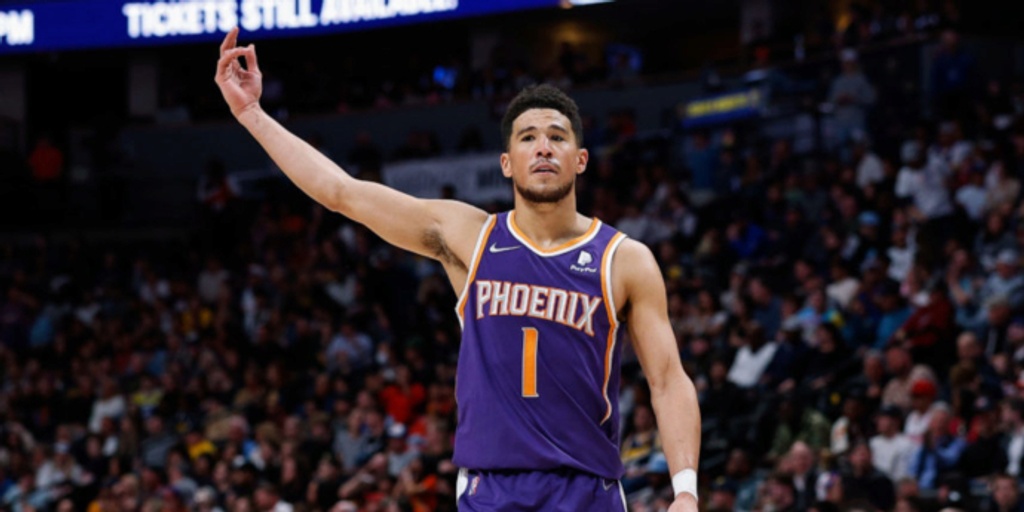 After another showcase, flexing their dominance in the Western Conference, the Phoenix Suns are sick and tired of the disrespect. Before making the jaw-dropping leap to elite, practically overnight, upon the arrival of Chris Paul last season, Phoenix was nothing more than a laughingstock at the bottom of the standings.

Now, as Suns star Devin Booker rightfully pointed out following an impressive 140-130 victory on the road in Denver on Thursday, it’s time for this team to rightfully — as he put it — earn their flowers on a national level. The team has sixty wins and is well on its way to comfortably finishing with the NBA’s best record. That's simply something you can’t overlook.

Oh, by the way, Booker bested the likely-MVP favorite in Nikola Jokic by putting up an absurd 49-point, 10-assist performance on the second night of a back-to-back. Forcefully, Booker and the Suns are putting themselves, again, squarely in the national conversation. And it’s one that should’ve already been brought up months ago.

“Honestly, it’s people playing with my name, man. It’s just too much for me,” Booker said of his view of the national disrespect towards himself and the Suns. “I’ve been at it for a long time, and I’m the type to see anything and take it as disrespect so that can get me going. The main objective is to win basketball games. They’ve been telling me that since I was 18 or 19, so now that we have the No. 1 seed locked up, been winning basketball games for two years straight now. This teams need their flowers. Coach Monty (Williams) should’ve been Coach of the Year last year. There’s just so much that I feel doesn’t get talked about on this team. We’ve done a good job about not worrying what people say about us, but it needs some recognition.”

Closing in on the best record in Suns franchise history, Booker is right on the money with his assessment. Toiling in mediocrity for the first five years of his career, it's obvious this was pent-up frustration finally spilling free from Booker. Early on in his career, Booker was viewed as a stat-padder who couldn’t help elevate a team to win meaningful basketball games. Now, he’s averaging 26.3 points, 5.1 rebounds and 5.0 assists while carrying a 57.3 True Shooting percentage on the No. 1 team in the Association.

Ramping up for another potential deep postseason run, Booker is putting his game into high gear. Taking over games whenever he pleases, all the while talking back to the naysayers along the way. Booker’s offensive explosion on Thursday against the Nuggets ranks high on the list for Suns head coach Monty Williams, as far as best performances under his guidance.

“One of the best performances I’ve seen him have since I’ve been here, because of the variables and obstacles we had. To have 49 and 10 on a back-to-back, it not only backs up what I said pre-game, but the fact that he’s not in the MVP conversation is just somewhat silly. When you can will your team to win like that, and do it in the fashion that he did it in tonight — says a lot about his work ethic, his individual ability, and a lot of other stuff I don’t have time to talk about.”

The MVP push is on in Phoenix for Booker, the rare young star who stayed when his organization was at its rock bottom a few short years ago. As the Suns organization itself pointed out, twelve players in NBA history have averaged at least 25 points, 5 rebounds and 5 assists on the NBA’s best team. All 12 of those occurrences finished with said player winning MVP.

Can Booker actually make a legitimate case alongside the established top three candidates in Nikola Jokic, Joel Embiid and Giannis Antetokounmpo? It’s doubtful at this stage, but there’s no doubt that Booker deserves a spot on the All-NBA First Team.

If I had a ballot, here’s how I would put together my All-NBA First Team: Ja Morant, Devin Booker, Giannis Antetokounmpo, Nikola Jokic, Joel Embiid. Far and away, those five players have seemed to be the most consistent all season long. Stephen Curry and Kevin Durant faded off the radar due to injuries. Luka Doncic received plenty of preseason hype, but he’s yet to really elevate into the same category as Booker for MVP-type narrative.

Speaking of narratives, the aforementioned best player on the best team argument is hard to ignore. Booker showed in Chris Paul’s 15-game absence that he can carry the load without any issues. During that span, Phoenix finished with an 11-4 record as Booker dominated all along the way.

Thursday saw the return of Paul to the Suns’ starting lineup, an immediate boost as the future Hall of Fame point guard finished with 17 points and 13 assists. What’s so special and unique about the Paul-Booker backcourt pairing is they are wired the exact same way. Both are obsessed with honing their craft, but also crave success at all costs.

As Williams alluded to postgame on Thursday, having two stars who are open to receiving criticism from their coach is rare nowadays. On a team known for its lack of ego, the Suns have this trait in spades with Paul and Booker leading the charge.

“When the best players allow themselves to be coached and called out, it means a ton,” Williams said. “It's certainly not something I take for granted.”

Simply put, this version of the Phoenix Suns is special. Not only did Williams echo that same thought after Phoenix’s latest win, but Paul and Booker also made note of it as well. When a team has bought-in completely on all levels — driven more by team success than individual accolades — the hard part of the puzzle is already accomplished. The type of chemistry Phoenix has within their locker room is rare, and they’re bottling up that energy on a run towards what should be another trip to the NBA Finals.

After the Suns suffered massive heartbreak at the end of last season, folding their cards to the Milwaukee Bucks after taking a 2-0 series lead in the Finals, they’ve come back as an even stronger group.

Phoenix still means business, even after notching win No. 60. The team is only a few more wins away from breaking the franchise record, and more boxes still need to be checked for a team chasing greatness.

“I’m sure the Valley is going nuts right now,” Williams said after the Suns clinched the Western Conference’s No. 1 seed.

Indeed, Phoenix is host to a true rising from the ashes, into a new golden era of Suns basketball.