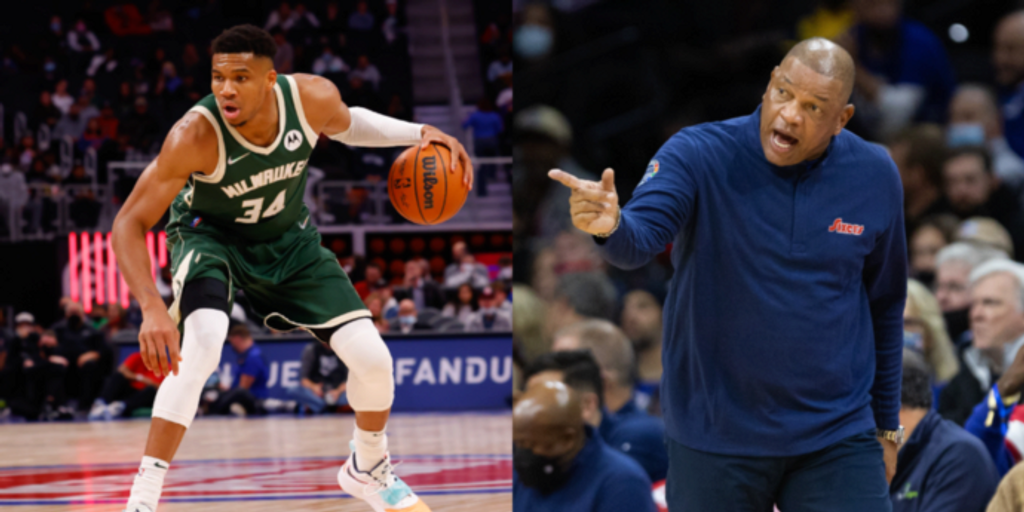 Doc Rivers recently had plenty of nice things to say about Giannis Antetokounmpo, whom he considers to be the most dominant player in the NBA right now.

The Milwaukee Bucks are having a slow start to the season, sporting a 6-8 record while sitting in 11th place in the Eastern Conference. The defending champs are not looking as dominant as they did last year, when they stormed through the regular season and won the NBA championship. However, it's worth noting that the team isn't at full strength; they've been missing their second-best player Khris Middleton, who should return this week after being sidelined due to the NBA's health-and-safety protocols.

But despite the Bucks' struggles as a team, Giannis is still producing big numbers, averaging 26.6 points, 11.8 rebounds and 6.0 assists per game. In a recent interview with the Philadelphia Inquirer, Philadelphia 76ers head coach Doc Rivers had a lot of praise for Giannis, calling him the most dominant player in the NBA. Rivers also admires that Giannis overcame his free-throw shooting problems in the playoffs last season, delivering big time and silencing the opposing crowd when everyone was against him.

“I don’t like gushing over another guy, but what he did last year was amazing," Rivers said. "They lost back-to-back games in the playoffs, he struggled at the free-throw line. He goes on the road. He has 20,000 people counting [the seconds before his free throws] — hell, we were counting when we played him — and then he takes that to the last two games. He’s the most dominant player in the NBA. He makes free throws. He was defiant almost.”

Giannis was really struggling from the foul line, and everybody saw the fans counting to 10 when he was standing at the charity stripe getting ready to shoot. At one point, it seemed like they were starting to get into his head, but he persevered and made those shots when it mattered the most. Such poise earned the ultimate respect of Rivers, who is positive that not too many players would be able to overcome that pressure, let alone lead their teams to a title.

Now, Giannis is focused on getting the Bucks back on track and climbing up the Eastern Conference standings, starting with a nationally televised showdown against the Los Angeles Lakers on Wednesday (with Middleton expected to play for Milwaukee).