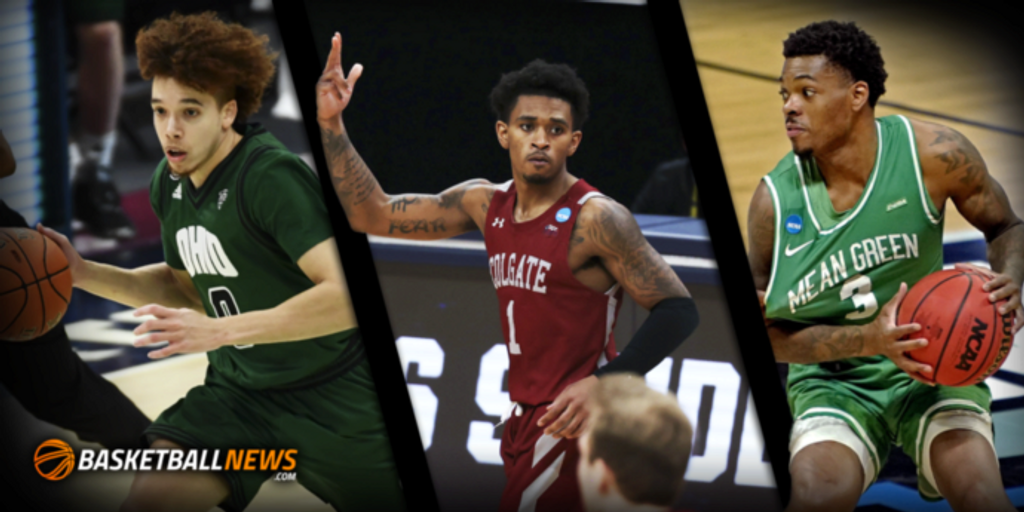 In Damian Lillard, the next mid-major NBA hopefuls see a blueprint

Back in March, smaller-school Colgate University blew an early first-half lead and lost to a Power-5 program in Arkansas, 85-68, in the NCAA Tournament's Round of 64. But viewers might have noticed one Raider guard whose game conjured up thoughts of an NBA superstar.

Despite a cold touch that afternoon, Jordan Burns scored 13 points -- an uncharacteristic low for the 2021 Patriot League Player of the Year -- and put his eye-popping handles and range on display. The broadcast crew applauded one step-back as Damian Lillard-esque, and others took notice on social media.

Jordan Burns with the deep 3 from Dame range!!! pic.twitter.com/DD8RU56yJ3

It meant the world to Burns, who feels the impact of Lillard's collegiate rise at Weber State and professional dedication to the Portland Trail Blazers.

"A lot of people were texting me after the game... it was nice," Burns told BasketballNews.com with a laugh. "It definitely makes you feel good to be compared to a guy like that."

Burns, Javion Hamlet of North Texas and Ohio's Jason Preston make up a trio of prospects taking a shot at the 2021 NBA Draft process. Like Lillard, the three guards made names for themselves at the mid-major level, captivated their respective conferences with the way they played and took pride in sticking it out with the school that recruited them, despite the opportunity to play on bigger stages.

Videographers and recruiting analysts didn't follow these players around in high school. They carved paths that had scarcely been walked before, and through an unflinching resolve, forced the spotlight to shine on them.

Colgate is traditionally more synonymous with toothpaste than basketball; the school has produced a single NBA player (Adonal Foyle) since 1965. But the Raiders were the only Division I program that offered a scholarship to Burns out of high school, and the 6-foot guard enrolled in 2017, intending to put the New York liberal arts university on the map.

He did just that. Colgate made two NCAA Tournament appearances in four years with Burns as the team's floor general. In 2021, the shifty senior averaged 16.8 points, 5.3 assists, 4.3 rebounds and 1.6 steals per game while shooting over 39 percent from long range. Along the way, Burns flashed "Dame Time" moves, and worked to exemplify one of his favorite players.

"[Lillard] has become one of the better guys shooting from 30-plus feet," Burns said. I think that's something I've tried to experiment with. The further you shoot out -- a lot of those shots are more open... being a smaller guard, that has helped my game tremendously, watching a guy like Dame Lillard."

When Burns played a post-grad year at Kent School in Connecticut, he turned down a late flurry of offers because of his commitment to Colgate. After his junior season with the Raiders ended in a loss to Boston University in the Patriot League title game, Burns tested the NBA Draft waters in 2020 and had the chance to transfer. But he chose to return to Hamilton, NY for this season's tourney-bound run.

"Loyalty is a big thing to me. Since I was a kid, that was something that was always stressed to me by my parents," Burns said. "...For me, I was okay with not going to a big school and staying at Colgate. That was where I had chosen to go, so I think I resonated a lot with him staying in Portland, and deciding that these are the people who invested in me, loved me and brought me in before anybody else believed I was who I was."

Hamlet's winding college basketball journey included two stops at the JUCO level and knee surgery before he finally reached North Texas (Sam Blum wrote an insightful feature on Hamlet for the Dallas Morning News). Then, the 6-foot-3 guard promptly won Conference USA Player of the Year in 2019-20, and this season, averaged 15.6 points and 4.5 assists per game. Hamlet's 24 points, 12 rebounds and 5 assists led the Mean Green to a 78-69 upset of Purdue in March Madness.

"You gotta believe it before anyone else believes," Hamlet told BasketballNews.com. "You just gotta keep going, even if it doesn't work tomorrow, today, the next day or the next couple of months. You just gotta stay true to yourself. Just keep working. The hard work does pay off."

He's got a mantra -- "Doubt the Doubters" -- that has fueled his work ethic and driven him to the doorstep of the NBA.

"I don't get caught up in the hype," Hamlet said. "I ain't [ever] had the hype. I've always been the underdog all my life. I just feel like me doing it is going to motivate other people to be like, 'Man, if he did it from there, I can do it, too.'"

Hamlet said he also had opportunities to transfer to high-major programs after that first year at North Texas. Instead, he adhered to the words of his pinned Tweet.

"I know it's harder for [North Texas] to get to the NCAA Tournament," he said. "[My mindset was] just go there and change the culture -- change it into a championship school."

Like millions of basketball fans around the world, Burns and Hamlet hear the narratives surrounding Lillard in Portland. They hear analysts and critics berate the six-time All-Star for choosing a small market over the flashy cities and super-teams around the league. But Burns and Hamlet know what Lillard knows -- that when you find a team and place that feels like home, you cherish it.

"It's all about staying true to you," Hamlet added. "Dame's trying to do something that hasn't been done in a long time, and I respect him for it. I'm kind of the same way -- big on loyalty. The people that gave you a chance, and stuck with you through your ups and downs -- you can't leave nobody like that."

Jason Preston knows it, too. The Ohio University guard's improbable hoops journey inspired thousands when it went mainstream during this past college season.

Despite layers upon layers of tragedy and turmoil, Preston tirelessly worked his way to two Division I offers, and from there, helped the Bobcats beat Illinois in the regular season and Virginia in the NCAA Tournament, averaging 15.7 points, 7.3 assists and 7.3 rebounds as a junior.

The 6-foot-4 guard is now testing the NBA Draft process while maintaining college eligibility. He loves to watch LeBron James and Chris Paul, but also appreciates the standard Lillard has set as a leader.

"I love his approach towards the game," Preston said. "If something bad happens to his team -- something good or bad -- he has mostly the same reaction throughout the whole game. CJ [McCollum], too. They're both very even-keeled and have a nice manner towards the game."

McCollum and Stephen Curry are a few of the other mid-major products that Preston, Burns and Hamlet applauded. Ja Morant has also publicly praised Lillard for his role as a beacon for this next generation.

Every mid-major star, from Lillard to this trio, as well as Oral Roberts' Max Abmas, carries a relentless passion for basketball and personal growth. But as Preston emphasized, every player's story is unique -- and to inspire others with it is a blessing.

"I think the most valuable thing you can give someone is inspiration," Preston said. "For people to hear about my story and to get motivated to do something themselves -- I think that's that's everything. I'm very happy that I can do that for certain people."