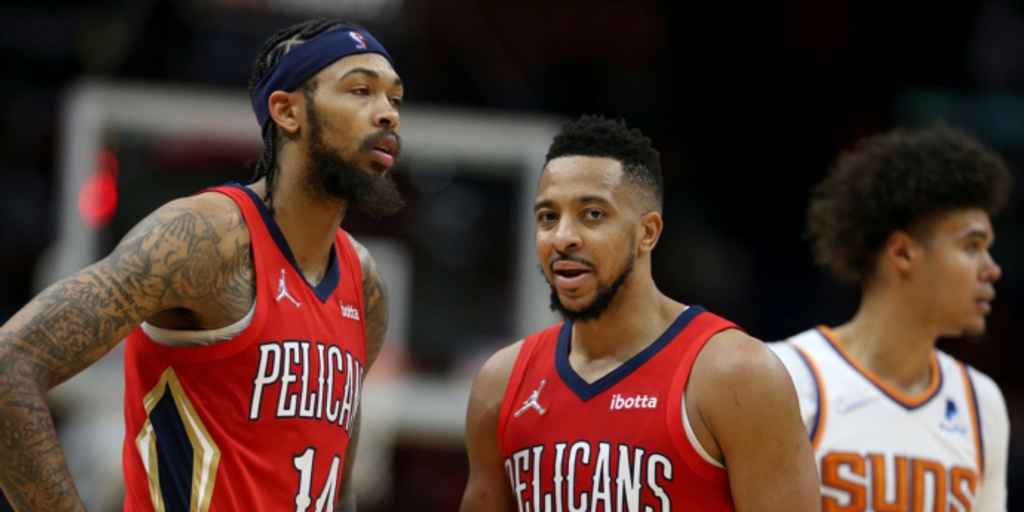 With a deep roster, the New Orleans Pelicans can surprise everyone

In the NBA, getting ahead of the trend when it comes to teams on the rise is a tricky process. However, sometimes it’s easy to spot the obvious candidates who have oodles of potential for a massive jump. Recently, we’ve seen teams like the Phoenix Suns go from perennial lottery team to instant Finals gratification. The Memphis Grizzlies are another strong example where a talented nucleus formed together, ultimately leading to an expedited rebuild process.

Here at Basketball News, I will unveil a few teams leading into the season who stand out from the rest. First is the upstart New Orleans Pelicans, who appear finally ready to break through the glass ceiling as a legitimate threat in the Western Conference.

When the Pelicans pushed the Suns in the first round of the postseason, it certainly opened a lot of eyes, myself included, for what could be coming down the Bayou. All of this occurred without their most important piece to the puzzle: Zion Williamson. With Williamson now expected to be fully healthy at the start of next season, New Orleans’ rotation doesn’t have many holes on paper.

The ideal blend of win-now veterans and enticing youth weave together for head coach Willie Green, who helped steer the ship when it mattered most in New Orleans’ improbable run to the playoffs without their young superstar. Now, in his second season at the helm, Green and the Pelicans top the list for organizations ready to truly ascend forward.

One of the biggest pivot points for the Pelicans was their acquisition of McCollum, who looks at ease running the show offensively. Playing more as a combo guard compared to exclusively off-ball in Portland, McCollum thrived. He amassed a career-high 24.3 points and 5.8 assists per game. In 386 regular season minutes, the two-man lineup of McCollum and Ingram averaged a blistering 116.9 points per 100 possessions. Not only should that number take potentially another step forward in 2022-23, but Williamson's presence can also make this entire roster better overnight.

Before Williamson’s offseason foot surgery caused a season-long setback — one that Pelicans executive vice president David Griffin said would originally have him back soon after the 82-game schedule began — the former Duke Blue Devil was beginning to truly dominate as an offensive engine.

Williamson acted as Pelicans’ lead playmaker bringing the ball up the court, running sets for himself and others under former head coach Stan Van Gundy while also being a one-man wrecking crew, averaging 27.0 points, 7.2 rebounds, 3.7 assists and 0.9 steals in 33.2 minutes per contest.

There have been no indications that Williamson’s foot remains an issue in New Orleans, so throwing him back into the mix alongside McCollum and Ingram will certainly become a scary sight for opposing teams. Allowing McCollum to fall into the third option for the Pelicans’ new-look attack should greatly benefit all parties.

Speaking of Ingram —remember how he seized the moment during his first postseason appearance, almost willing the No. 8 seed Pelicans over Phoenix? Before falling in six games, Ingram put the Association on notice for what should be the next step of his own blossoming career. The lanky wing averaged 27.0 points, 6.2 rebounds and 6.2 assists on an impressive 58.2% True Shooting percentage.

We’ve already witnessed Ingram’s first All-Star berth, but could a potential Pelicans’ rise finally lead to some All-NBA consideration? Honestly, it wouldn’t be a shock once April 2023 rolls around.

The three-headed monster of Williamson, Ingram and McCollum speaks for why New Orleans qualifies as a top candidate for a serious leap forward. The ancillary pieces on this roster fit smoothly into the mix as well.

Herb Jones quickly turned into one of the NBA’s most versatile defenders as a rookie. Jose Alvarado, an undrafted rookie, also showcased a never-say-die attitude that quickly won him valuable rotation minutes, which should only increase during his second go-around.

Trey Murphy III is another intriguing long-term piece for New Orleans, because wings who can shoot from distance at an above-average clip are among the most coveted archetypes in the modern NBA. Murphy recently dove into his growth last season with our own Ethan Fuller and laid out what should be another important developmental year in 2022-23.

The over/under win total projection in Las Vegas for the Pelicans sits at 44.5, which feels like an easy wager to lay. Williamson’s health will obviously be a huge question looming for New Orleans now and in the future, but last season showed this team is on the cusp even without their most important piece. Ingram is a bonafide All-Star-caliber player who will only continue to grow entering (incredibly) his age-25 season. McCollum continues the next phase of his career in arguably his best spot yet, deferring to the young stars and finding his spots at the most efficient parts of the floor.

And how could we not talk about the plethora of assets the Pelicans sit on following the Anthony Davis and Jrue Holiday trades? Ingram is a centerpiece to their vision from the Lakers, but they remain in an advantageous position whenever the next disgruntled superstar wants out.

Everything on the table right now in New Orleans is simmering like a tasty shrimp gumbo. Now, all that needs to happen is internal improvement and health cooperating along the way. Similarly to the Suns and Grizzlies from years prior, the Pelicans are an odds-on favorite to surprise everyone in just a few months.