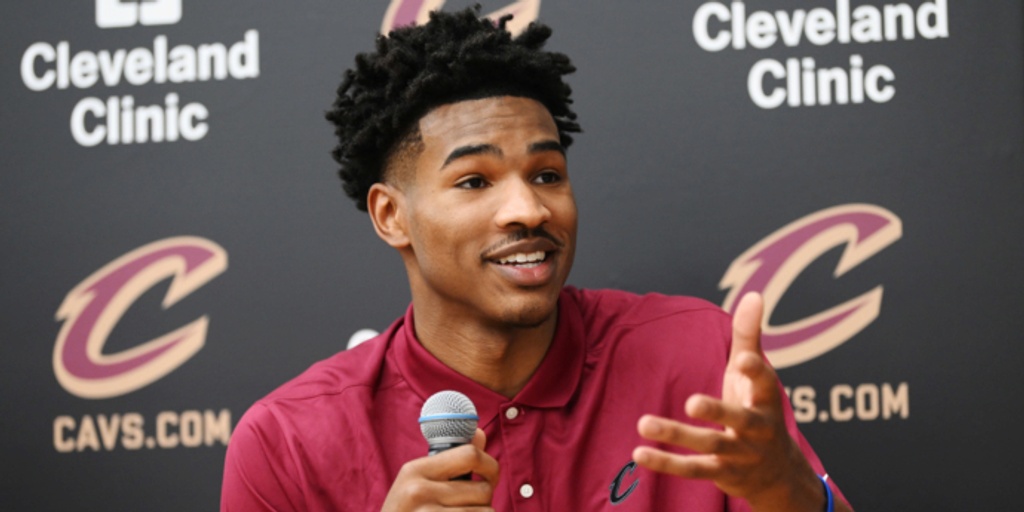 Over the past four seasons, the Cleveland Cavaliers have gone for the long play in the NBA Draft.

Koby Altman hasn’t been afraid to take the proverbial big swing at the plate since he’s been in charge of the front office, selecting a one-and-done freshman in each of the four years the wine and gold possessed a draft pick — Collin Sexton, Darius Garland (and Kevin Porter Jr.), Isaac Okoro and Evan Mobley. That was as Cleveland’s general manager.

On Thursday night, in Altman’s first draft as team president along with recently promoted general manager Mike Gansey, recently promoted assistant Brandon Weems, Brendon Yu and Co., the organization shifted its philosophy. With the No. 14 overall slot in the field, the Cavs got their guy in Kansas senior Ochai Agbaji to further accelerate their ascension.

“To keep (the pick) actually brought a lot of energy to our scouting department. ‘Let’s go after it and see who we can bring in.’ Definitely different than the last three or four years in terms of what we’re looking for,” Altman said. “This was more about who can come in and really help us and help this team achieve. A different process in terms of trying to find the most upside swing talent versus who can be the best fit. It was certainly a luxury to have that draft pick this year, and I guess that is a silver lining of just missing the playoffs…

“...We really like his makeup, and he's solid. He knows he's gotta defend and make shots to make it in the league, and I think he brings that right away. Just excellent fit and super accomplished. You talk about a national champion and brings a skill set that we don’t necessarily have to the table. We did a lot of due diligence, we had a lot of guys come in and we liked a lot of players at this pick. But where we were standing and with him on the board, we were super excited to bring Ochai in. That skill set is going to be utilized, we hope, right away.”

Think about the most important phrase: Right away. The Cavs, who at this point last summer were hoping to nail another franchise cornerstone piece (and it appears they have successfully done so with Evan Mobley), feel like they are ready to surround those pillars with a ready-to-go prospect in Agbaji after coming up one win short of making the 2022 playoffs.

“It means a lot, coming from Coach J.B. [Bickerstaff] and the whole staff and obviously what they think about me, and why they brought me here to this organization means a lot. I’m just ready to start working and start working for Coach J.B. and the city,” Agbaji said in his introductory press conference from Cleveland Clinic Courts on Friday afternoon.

The 22-year-old is set to join a Cavs roster with teammates who are younger than him, yet have more NBA experience. At the same time, Agbaji boasts a list of accolades and high-stakes collegiate encounters, most notably in his final season with the NCAA Champion Jayhawks this past April.

“I think it’s great for where we are now. We’re trying to win basketball games,” Altman said. “It’s a part of his makeup and he’s coming to a team that wants to win. He’s going to bring some unique ingredients to that. You’re seeing national champions kind of sprinkled in these Conference Finals most recently. They definitely bring a chip with them. We hope he brings that to us.”

Bickerstaff is thrilled that Cleveland was able to add Agbaji to the mix.

“I thought he could be a weapon. He’s got a skill that no matter where you are in the NBA, you need it,” Bickerstaff explained. “He has the ability to put the ball in the basket and it’s not just the ability to stand in a spot and make a shot. When we watched him play, it was his ability to move and catch and shoot off of screens, off of handoffs, where he knew how to make himself difficult to guard.

“And you know at this level, shot-makers are a premium — not only as a young player, as a role player, as a star; his responsibility is to help his teammates. Obviously, with the steps that Darius [Garland] took, Jarrett [Allen] took, those guys are going to need help to keep eyes off of them. That was one of the things we saw was a lot of people just would stare that pick-and-roll down. Now, when you throw in another weapon that can create shots like that off the move and makes defenses shift, now that frees up those guys as well. So he’s a great fit as a complement to those guys. And then our expectations are for him to grow into that role as well.”

Hearing that Bickerstaff is prepared to find a spot for him off the rip excites Agbaji, who is admittedly anxious to get to work with his new teammates, as Garland and Okoro have already reached out to the soon-to-be rookie. Coming into a new situation, Agbaji plans on being a sponge, soaking in all the advice from both the veterans and the younger talent.

Altman referred to Agbaji as a “late bloomer” who is “self-made,” no pun intended for who Ochai was coached by in Lawrence. (Altman repeatedly gave credit to Bill Self for the job he did in helping further Ochai’s development though.) That assessment certainly checks out.

In four years with the Jayhawks, it wasn’t until his junior and senior seasons that Agbaji blossomed into an NBA lottery pick. He stuck to the script and stayed for every season he was eligible to grind away at his craft, and in the final go-round, the work showed.

The 6-foot-5, 210-pound upperclassmen averaged 18.8 points, 5.1 rebounds and 1.6 assists on a career-best 59.5% True Shooting percentage. He cashed in on 40.7% of his triples to boot (and on a high volume of nearly seven perimeter attempts per contest).

“My mindset going back into my senior year was different than the past three years. What I've learned in that pre-draft process (where he tested the waters) was, I had a whole level of my work ethic that I could take it to a different level and what if I apply that to my senior season?” Agbaji said. “And that's what I did, mentally, physically putting more effort into my mind, my body, all that stuff, and just seeing where the cards play out.

Altman and Bickerstaff believe that, while he’s a plug-and-play type of player, there should be no his-development-is-over talk when it comes to the more seasoned Agbaji.

“I mean, you have four years of data. You've seen him get better each year,” Altman said. “Now, I will say I don't want to put a ceiling on him because he has at every pass from high school to his senior year of high school, being under-recruited, goes to Kansas, they redshirt him his freshman year, they lift the red shirt because he's doing so well in practice because he can compete and play. Grows his way to becoming first team All-American, Big 12 Player of the Year, a number of accolades that he grew towards.

“So does he figure out the NBA and have some upside? I think he does. But I think immediately we know what he's going to be able to do. He's going to defend, he's gonna compete, and I know JB wants to run him off a lot of stuff and get him some shots. So certainly more of a finished product than what we've drafted in the past.”

Self vehemently called such an assumption "a bunch of crap," and less hostily, Agbaji echoes that sentiment.

“That’s just more motivation to get better,” Agbaji said. “I think as my progression, my years have gone by, I feel like I’m only getting better. That last summer, what I learned, applying that to my career moving forward is even more motivating to me.”

As the league continues its shift into positionless basketball, there are many wondering how Agbaji figures into a guard room occupied by Garland, Okoro, Caris LeVert and possibly Sexton (a restricted free agent), if he is brought back into the fold.

Bickerstaff insists that the Cavs will find a way to put him on the floor, and that the work will start before training camp in September as it did last season before a terrific ensuing campaign. Cleveland’s coaching staff does not like putting players in a box, as we saw with their jumbo lineups featuring Lauri Markkanen, Mobley and Allen among other unorthodox combinations.

And while Altman concedes that Agbaji is probably more of a 2-guard, the Kansas star possesses a completely different tool kit than the rest of the bunch.

“There's a need for that shooting piece. And not just standstill shooting, but really guys that can sprint off pindowns, and even if they're not getting the ball, you have to account for their movement away from the ball,” Altman said. “He does several different actions that create meaningful offense. We got a little bogged down last year, a little stagnant at times. And so maybe he can sort of turn it up and make us harder to guard right away... He can really shoot. He’s got a really quick trigger. You can run him off screens...

“The fact he can play wing, the fact he can guard wing is great. I don’t know if that went into it so much as the need for shooting. I don’t want to put him on a pedestal and say, ‘This is the next great wing that we draft,’ but maybe it is. I do know that he fits a need right away and he’s going to compete, and he has that winning pedigree that we really like.”

(In a related note, Altman and the Cavs are hoping to get Sexton back for his cultural importance, stating that the Agbaji addition “is not a duplicate.”)

This morning, Agbaji woke up as a Cavalier, and he felt the love from the city when he landed in Cleveland on Friday morning. Going into draft night, he was already feeling blessed: a national champion, waiting to realize his dream of playing in the NBA. Then, a team came calling and proved they believed in him.

To Agbaji, this is where he is supposed to be.

“From the moment I got here, from my workout — I just felt that home feeling,” Agbaji said. “Coach JB and Koby and Mike, they gave me that home feeling the first second I walked in here. So I mean, that's why I said I felt right at home here. I was here just like a week-and-a-half ago but it actually really does feel like home, so I'm glad to be here.”

As we know, this lengthy, rangy Cavs defense creates a lot of turnovers. Agbaji is a tremendous pick-and-roll defender against ball-handlers (teams scored just 0.43 points per possession in such situations, per InStat), and can “shoot the gap” well with his 6-10 wingspan, according to Altman.

But in turn, a terrific transition player in his own right, Agbaji is poised to throw it down in the open floor as a result of those giveaways.

Is he already thinking of that moment at Rocket Mortgage FieldHouse? You bet.