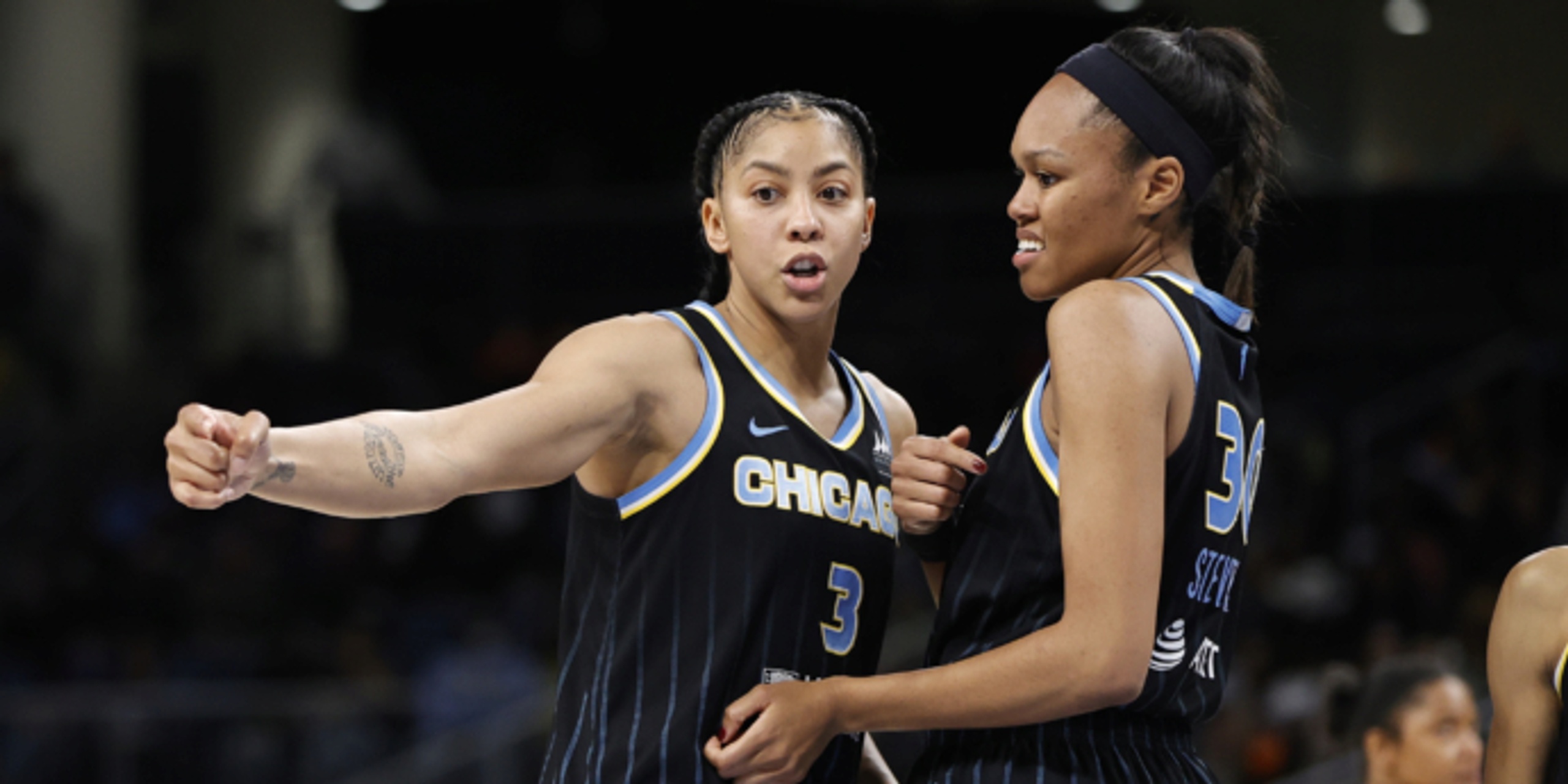 The Chicago Sky continue to cement their defense

The WNBA is somehow already a month into the season, and the Chicago Sky have shown perhaps the most growth a quarter of the way through the season. They have had success tinkering with lineups and implementing new players while attempting to build upon last year's title. Chicago is still re-integrating Finals MVP Kahleah Copper, who just played her fifth game last night against the Atlanta Dream. In that game, she put forth her best showing of the season, finishing with 21 points. The Sky are still finding their offensive flow, but each game, their footing improves.

Defensively, the Sky are putting together elite defensive stretches. Their offense clicking to the tenth degree was a large reason for their postseason success, yet their hyperactive defense deserved arguably as much focus. Through 9 games to start the year, Chicago is third in defensive rating per Her Hoops Stats.

They've given up 80 or more points just three times this season. Last night's 65-point output from the Dream is yet another feather in the cap of James Wade's aggressive scheme. The starting lineup of Courtney Vandersloot/Allie Quigley/Kahleah Copper/Candace Parker/Emma Meesseman pitched a no-hitter in essence, outscoring opposition by 18 points in the minutes they shared the court. Out of the 19 five-player lineups that have played at least 30 minutes in the W this season, only three have a higher net rating (+16).

This is Chicago's defense at its best: Active hands, ball pressure on screens, backline rotations, and timely recoveries to continually morph to each action.

To start, Candace Parker angles herself so well on the trap, forcing Kirsty Wallce to backpedal and escape with a pass-out. Parker then recovers to Cheyenne Parker as Emma Meesseman peels back to the corner. Courtney Vandersloot is zoned up but slides back in front of Erica Wheeler. The defense is still in control, and Atlanta's first action is nullified.

Wheeler swings to Naz Hillmon in the corner to no advantage, so she kicks to Rhyne Howard sprinting up to the slot. Notice Allie Quigley actively track Wallace on the cut. It sounds minute, but this defense is so reliant on everyone being in sync and active. If one moving part falls asleep, the gaps open. Quigley takes away any sort of interior outlet for Hillmon.

Rhyne Howard sprints up to the slot and Rebekah Gardner gives chase. Howard dishes to Parker and cuts baseline for a pinch post action, but Gardner uses her length to negate that passing window. Now we're down to Cheyenne Parker taking Candace Parker one on one from the mid-post with minimal time on the shot clock.

This Sky team is adept at forcing offenses to work through progressions and into shots that are less ideal for an efficient and effective offense.

Parker, Meesseman and Azura Stevens all have the length and size to play the five, but it's the culmination of their skillsets that maximizes them defensively. Parker and Stevens are incredibly mobile and have great instincts in help. Meesseman also has good instincts and very good court vision and feel for where to be. She's always had active hands, but is sneakily 4th in the league in steals per game per Her Hoop Stats. She sniffs out plays moments before they happen and pounces.

Playing alongside other like-sized players who have the ability to cover ground makes Meesseman's defense even more effective.

Much like we saw with the Cleveland Cavaliers this season in the NBA, size, length and mobility across the board opens up the potential to greatly shrink the floor and squeeze the spacing of the offense. They're so good at knowing personnel and using it against opposition.

Cheyenne Parker pops to three after the screen for Howard, but Candace Parker still sags off and heavily plays the paint. Parker has been willing to shoot the ball this season, but why give up the interior drive when you can force the ball to a shaky shooter or force difficult passes, much like the one Wallace ends up turning over?

Even if that pass goes through, Copper is reconnecting after the hard screen and Meesseman has already rotated over low to cover the rim. There's just so much length in the lane.

Nia Coffey is typically a solid shooter, but she has struggled to find her consistency this season. Meesseman knows that.

Copper presses Howard fullcourt (something the Sky did much of the game to any ball-handlers), Meesseman cheats at the nail and Quigley zones up to make the weak side harder to manipulate.

The Dream opt for an empty ball-screen and a really hard set screen to try and force Meesseman into a one on one in space.

Meesseman presents her length on the peel switch to deny an open pull-up. Quigley works to reconnect on the back end, and Azura Stevens rotates low (a staple of an aggressive defense) to meet Monique Billings at the rim and send her packing. Notice too how Gardner fights down to boxout Kia Vaughn whom Stevens helps off of to close off the rim. Without Gardner's extra oomph, that's an offensive rebound and likely putback.

Have you noticed how often Rebekah Gardner's name has popped up in this piece?

Rookie of the Year frontrunner Rhyne Howard finished with 5 points on 2/12 shooting last night and Gardner was a prime reason for her struggles. Gardner is so quick on her feet, and her defensive slides just never stop as her motor is always running red hot.

Gardner sheds screens remarkably well, is so active at getting back in front in reconnection and uses her length to blow up plays with her quickness. She's establishing herself as one of the best off-ball chasers in the league and an incredibly fiesty on-ball defender as well.

If she does misstep or make a minor mistake on the perimeter, she has the recovery tools to turn errors into turnovers.

As I mentioned yesterday, it'd be difficult to keep her off of All-Defense the way she's playing to start the year.

With a record of 6-3 a quarter of the way through the year, the Sky aren't yet firing on all cylinders, and that's part of what makes the team so exciting. The moments of defensive dynamism where they absolutely shut the water off on opponents have flashed all year. Ousting the Washington Mystics in the late game during a primetime matchup and dragging the Dream in the mud on Friday night early in the game last night are the indicators you watch for throughout a season that make you go "hmmm," and stop to consider what the future may hold.