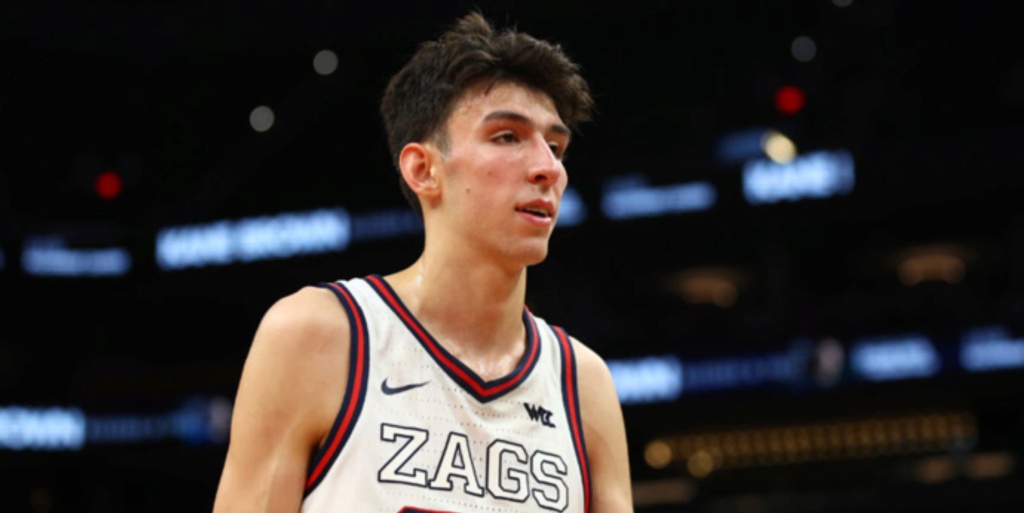 Chet Holmgren looks the part of a franchise-changing prospect

On Saturday morning in Phoenix, the No. 5 Gonzaga Bulldogs squared off against the No. 25 Texas Tech Red Raiders in the annual Jerry Colangelo Classic. The main headliner for this game, which drew me to attending, was Gonzaga freshman Chet Holmgren, a consensus five-star recruit from Minnesota.

Holmgren is currently ranked No. 3 overall on BasketballNews.com's 2022 NBA Draft Big Board, so what better way to introduce myself to a top lottery pick than making the 15-minute trek to watch him play? To make matters more fun, the Bulldogs were taking on a tough, gritty Texas Tech squad who actually beat them in the Elite Eight three years ago.

Our Senior NBA Draft Analyst Matt Babcock and yours truly took in the game, intently watching Holmgren throughout.

So far this season in 11 games, Holmgren is averaging 12.7 points, 8.5 rebounds, 2.5 assists and 3.6 blocks while carrying an elite 68.5% True Shooting percentage. Over a per-36 minute sample, Holmgren’s numbers look even more impressive: 18.2 points, 12.1 rebounds, 3.5 assists, 5.2 blocks. As you can see just off the numbers alone, Holmgren is a special talent who can do pretty much anything on the basketball court.

For those unfamiliar with Holmgren, here’s a quick breakdown via his BasketballNews.com draft profile:

“At 7-foot tall with a 7-foot-6 wingspan, Chet Holmgren is a playmaker on both ends of the floor. He's comfortable with the ball in his hands and can score on all levels. On the defensive end, Holmgren greatly affects the game as a rim-protector. He will need to add weight to maximize his potential, as he is rail thin, but he is one of the most unique prospects we've ever seen nonetheless. Holmgren is projected to be a top-3 pick in the 2022 NBA Draft.”

Although Holmgren’s stat line wasn’t impressive from a box score perspective — 5 points, 11 rebounds, 2 assists and 2 blocks in 24 minutes thanks to foul trouble — I stepped out of the Footprint Center impressed, wondering what the lanky 7-footer could soon become.

It was the little things that impressed me the most with Holmgren.

High-IQ play on both ends of the court, patrolling the paint making Texas Tech guards allergic to drive attempts, using his massive wingspan to his advantage, the shot form on his jumper and taking advantage of his touches in a low-usage role for a loaded Gonzaga team.

Holmgren has already shown the superstar-like flashes this season for the Bulldogs. Remember that insane dribble between-the-legs crossover leading to a dunk against Duke? He has that in his bag as a 7-footer. Also, he makes blocking shots look way too easy, which can take away from the actual dominance Holmgren displays. On one possession against the Red Raiders, Holmgren barely got off the ground and swiped the ball out of mid-air on a late drive as time ran down in a 69-55 win for Gonzaga.

Sitting next to me scouting Holmgren, Babcock dropped in his biggest takeaways on the 18-year-old future top-five draft pick:

“Chet does a little bit of everything on the offensive end. He shoots threes, can put the ball on the floor gracefully and sets up his teammates well with underrated passing vision, while also using his length and coordination to finish around the rim. However, Gonzaga is a very good team with a lot of depth, so Holmgren’s opportunities on the offensive end only come within the flow of the game, limiting his production at times. For example, he only took four shots versus Texas Tech.

"Although I’m excited about his talent on the offensive end, I think his biggest impact comes on defense, as he alters and blocks shots at such an incredibly high rate. He definitely needs to add functional weight and strength to maximize his potential, but the combination of Holmgren’s high skill level and remarkable length make him such a unique prospect. He is a top-tier prospect in my book.”

Remember how unique of an athlete and defensive force Kristaps Porzingis was for the New York Knicks before tearing his ACL in early 2019? That was the one comparison I kept landing on when watching Holmgren for the first time in-person. He likely fills out to a similar frame as Porzingis, but his defensive potential is even higher than pre-ACL-injury Porzingis. The way Holmgren can completely change a team’s offensive game plan around the rim is just so impressive.

On top of that, as Babcock alluded to, his ability to put the ball on the floor and shoot threes with a beautiful form forecasts well at the NBA level. Holmgren’s strong floor looks to be an elite role player, and his ceiling looks the part of a true franchise-changing talent atop the 2022 NBA Draft.

It wasn’t the splashiest performance from Holmgren that we’ll see throughout the 2021-22 season for Gonzaga, but I certainly got the message loud and clear on why he’s one of the safest prospects in the draft. And when picking apart prospects, if his biggest weakness is only his strength and need to fill out his frame, then there’s really not much to worry about with Holmgren.

Once Holmgren packs on the pounds in an NBA strength and conditioning program, plus masters the art of verticality even further, his upside on the next level is truly astonishing.