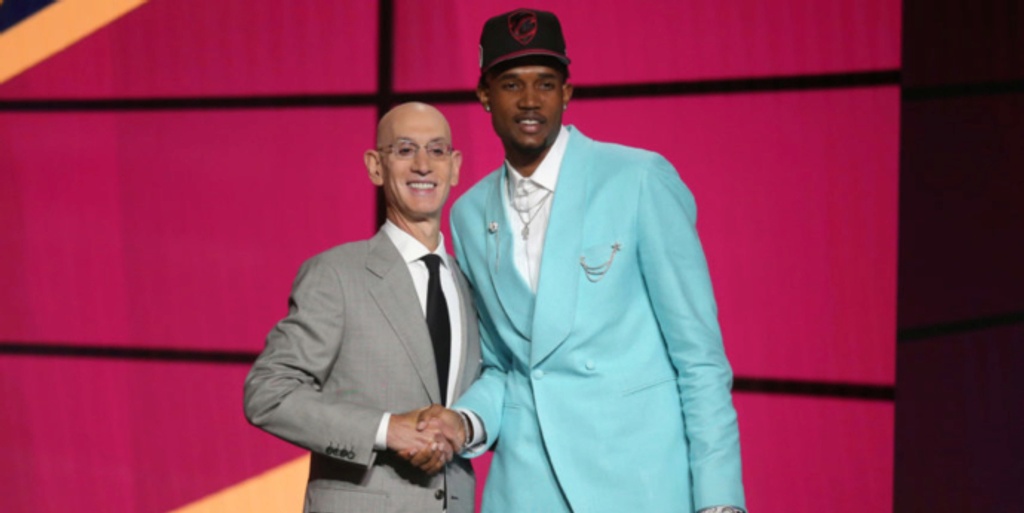 Not your typical 7-footer: Evan Mobley is a guard in a big man's body

When you’re 7-feet tall, have a 7-foot-4 wingspan and average 2.9 blocks on a nightly basis, chances are you’re going to be pegged as a center.

But pigeonhole Evan Mobley at your own risk.

“I feel like I'm a little underestimated sometimes, but I'm just here to prove all them wrong," said Mobley, who was taken No. 3 overall by the Cleveland Cavaliers in the 2021 NBA Draft. “I feel like my guard skills and ball-handling [are abilities] a lot of seven-footers don’t have, as well as my shooting. Those few attributes are some that most seven-footers don’t have and more guards, I would say, have.

“Me growing up, I've played up [a level] a lot, so I had to be a guard a lot of the times – 'cause I wasn't always the tallest 'cause I was playing up with my brother. And then also, having my dad as a coach, he taught me a lot of guard skills growing up; had good fundamentals and a good base. As I kept growing and growing and got taller, that just stayed with me, and that's how I am the player I am today."

“It's the combination of size and skill; you just don't see that regularly,” Cavs head coach J.B. Bickerstaff said of Mobley. “When you put a guy in a 7-foot frame – one, I love just watching the passes that he makes. Like when he puts the ball on the floor, most typical 7-footers, they see the floor and they see the rim. And when I watched him play, when he put the ball on the floor, he saw where the defense was first, and how that created open areas for his teammates.”

There’s been an influx of young talent in Cleveland over the last four seasons, and Mobley may very well be the star that the franchise has been thirsting for ever since LeBron James’ second departure. Thanks to some lottery luck, Cleveland landed the third overall selection, which is the highest the Cavaliers have picked since the 2014 NBA Draft.

“There’s weight definitely... [but] I try not to focus on all the pressure,” Mobley said of being the No. 3 pick. “[I] just want to come here, do the best I can and just get a lot of wins, hopefully become Rookie of the Year, get a lot of Rookie of the Months throughout this whole entire process.”

“We’re super fortunate,” Cavs general manager Koby Altman said at Mobley’s introductory press conference on Friday afternoon. “We were sitting at the third pick and I told my guys all the time, ‘There’s no way Evan Mobley gets to us at 3.’ That’s how incredibly talented this young man is.”

Though he is aware of how much potential Mobley has, Altman insists the 7-foot, 215-pounder will have an immediate impact in Cleveland as a rookie. When asked about what he likes about Mobley’s game, Bickerstaff chuckled.

“Everything. That’s the easy one,” Bickerstaff said. “Obviously, the most important thing is when you do your background and you talk to people you trust about Evan and his family, the most important thing is the type of people that they are. You can go to bat with people that you know are genuine, people you know that care about more than themselves and when you’re building a team that has that type of character, the chemistry grows more quickly, their willingness to do more for one another grows more quickly and that’s how you translate to wins. That’s where you start.

“We’re finding the world is smaller than we thought because we have a lot of close connections all the way through family members and things like that where we were able to get a lot of great intel about the people we’re dealing with. Then, obviously, you throw in the skill set. You’ve got a guy who is 7-feet tall, who can handle the ball, pass the ball, playmaker, defend, can score, the list goes on and on about his capabilities. But what it does is it gives you a ton of versatility as a coach.”

Let’s start with Mobley’s instincts in the point-forward role. He’s going to have different ways to impact this Cavs' offense with two guards who are highly aggressive in their own ways. There’s Collin Sexton, technically the elder statesman of the rebuild, who has found a groove playing off the ball as a baseline cutter and improved secondary-action passer. Then there’s Darius Garland, who was very effective in his sophomore season as a facilitator and lob specialist, as well as from beyond the arc as a deadeye three-baller.

When those two feed Mobley, who could be stationed at the elbows or even at the nail, chances are he’ll return the favor with a bullet off-ball or a dribble hand-off.

“I feel like me and Collin Sexton and Darius Garland are going to have great chemistry on the floor,” Mobley said. “Me just making plays for them, they're making plays for me, pick-and-roll actions, all that. I feel like we're just gonna have a great dynamic duo, I guess, with all my teammates, as well as Jarrett Allen.”

Already given the nickname Tower City, presuming Allen (a restricted free agent) returns to the Cavs as the team expects, Mobley and his big-man partner – along with Isaac Okoro or Larry Nance Jr. – will establish a defensive frontcourt that is as intimidating (and versatile) as any in the league.

At first glance, one might think that playing Allen and Mobley together would be clunky. However, in knowing their stylistic differences, it might not be a crazy idea.

Allen is somebody who thrives on the block and in the paint, playing clean-up guy, making solid decisions and acting with low usage. Mobley, on the other hand, can stretch things out a little more, allowing Garland, Sexton and Okoro to move without the ball in their hands. It wouldn’t be surprising to see Mobley facing up or attacking when given a gap of space, either.

“We were having conversations earlier about the teams that win in this league and how they win and you go back and look at it, and the teams that win the paint are typically the successful teams at both ends of the floor,” Bickerstaff said. “When you throw in a guy like Evan with Jarrett and Isaac in our group, they give you an opportunity to win the paint. That translates to success. Those are things that we are excited about. But the fun part for us as coaches is watching the growth and helping young men reach their potential. We have been given a heck of a beginning and a great opportunity with great upside.

"I think history has shown us that size and skill beats small and skill. If you go back just recently with the Lakers’ [championship] team, they had big guys and then they threw Anthony Davis at the 4, who was skilled. Their size helps, but they gotta have that skill. They gotta be able to play-make. They gotta be able to pass. They gotta be able to shoot. So if you can accumulate enough of that, you can overcome everybody wanting to go and play small-ball basketball. He gives us that opportunity because he can switch. A lot of guys when it comes to the end of the game, big guys can't play. We're fortunate enough in Evan and Jarrett that we have two big guys that can switch on guards and keep guards in front of 'em. That gives 'em an opportunity to stay on the floor at the end of the game. They both also have a skill set, so if you decide that you want to switch and throw small guys on 'em, we'll just throw the ball up in the air, play jump ball and let those guys go tip it in. So I think we're fortunate with the guys that we have and obviously with Evan, and the combination of him and Jarrett together.”

As rookies transition to the NBA, they usually have the hardest time with the amount of games and the demand of the season itself, which includes adjusting to the physicality that comes with playing against grown men for a full season. Mobley has the size, but he’ll have to put on some weight to better match-up against the brawn of many in the Association.

“I feel like just staying in the gym, practicing, working with the weight coach and all that will just help me develop my skill physically, as well as mental focus as well,” Mobley said. “Because I know the season is very long, and mentally, it could be draining.”

Seeing the league trend away from allowing contact in the lane, Bickerstaff already has plans on how to use Mobley within his offense.

“What we have to do is play him to his strengths, and people can't hit what they can't catch,” Bickerstaff said. “So putting him in space, allowing him to use his speed and those things can help him be successful… [The NBA] likes to see skill, and they like to see guys be in attack mode. So Evan, with his ability to put the ball on the floor, can put a ton of pressure on defenses.

“So now if he puts the ball [on the deck], he catches it at the elbow or the top of the key, and now he’s straight-line driving, defensive players have to show their hands because they're not allowed to touch and not allowed to be physical and impede his progress. So we'll put him in a position where his skill set is an advantage and now the defense is at a disadvantage, where they can’t put their hands on him and touch him and be physical.”

Not even a day after he heard Adam Silver call his name, Mobley arrived in Cleveland to a sea of fans when his plane touched down. Within the organization, he said that his new Cavaliers teammates welcomed him with a phone call after he was drafted. (Mobley is actually reunited with Okoro, an old friend from USA Basketball’s gold-medal-winning 2018 U17 club.)

“The past 12 hours have been crazy,” Mobley said. “A lot of media, a lot of crazy moments, my name being called, celebrations, all that, not a lot of sleep. Just been amazing. When I came here, saw the whole facility and I just loved it here... It’s gradually sinking in.”

The soft-spoken Mobley covered everything from playing one-on-one with his brother, Isaiah, to growing up to accomplishing a dream that began to feel realistic when he reached high school. He always felt it would come true.

This self-assuredness was on display several days before the draft, when he made a bold prediction while speaking with reporters.

"I think I'll be a generational player that no one has really seen before," Mobley confidently stated. "That's what I aspire to be, and I'm just going to keep working and staying in the gym until I get there."

Now, his chance is finally here in Cleveland.

And remember, it’d be wise to let his game do the talking.