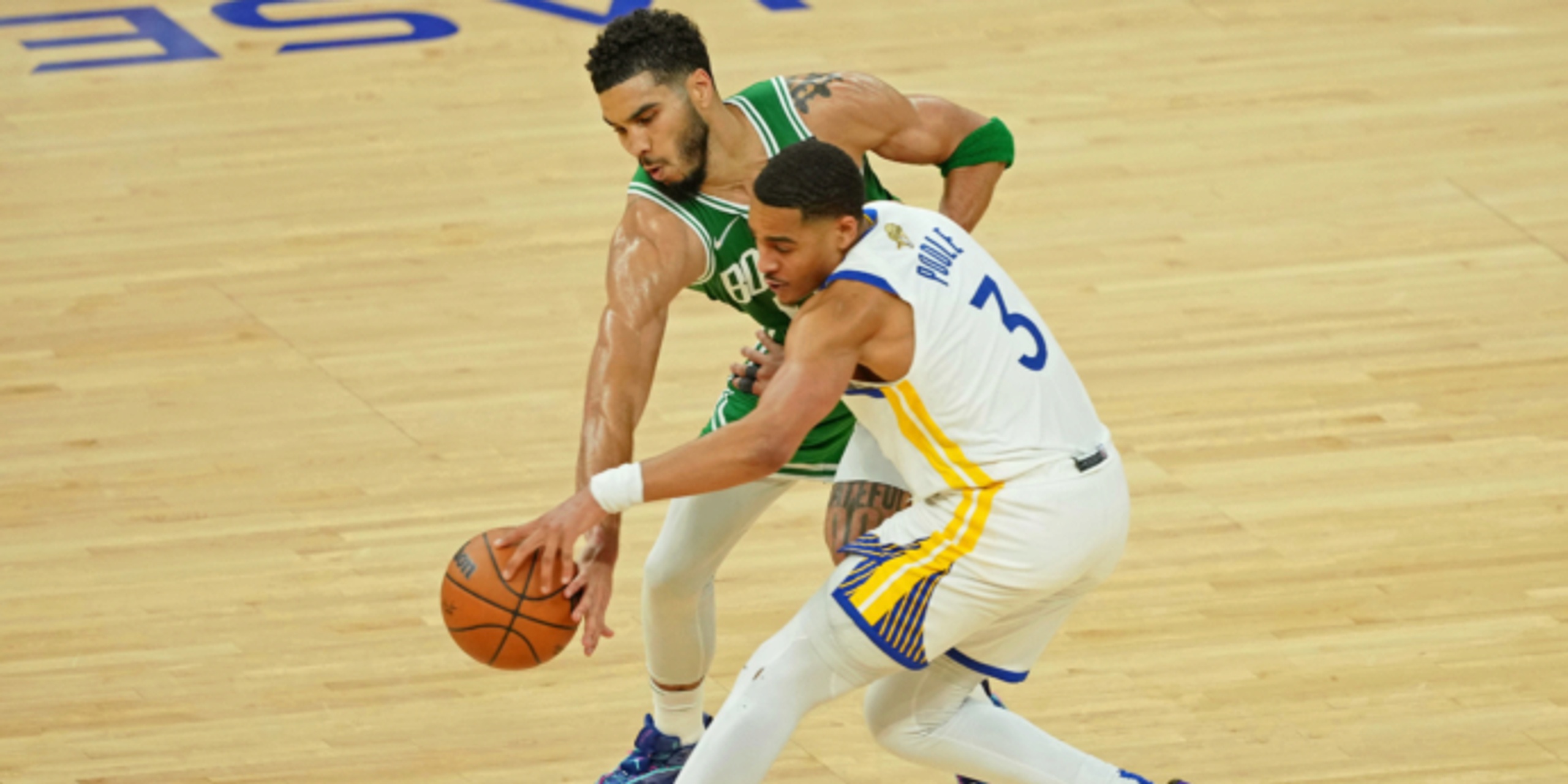 Can Jordan Poole turn it around against the Celtics in the NBA Finals?

The term "X-factor" is thrown out a lot when it comes to postseason analysis. Its usage typically has a positive connotation — a player who defies expectations and helps the squad grind out a win by doing things outside of his scouting report.

Think Derrick White, who played hero for Boston in Game 1 of the 2022 NBA Finals by splashing in 5-of-8 threes as a 31.2% regular-season outside shooter.

Here's the reality, though: Being an X-Factor doesn't always correlate to team success. As Jackson Frank wrote this week, Jordan Poole can swing the Finals in either direction. Through one game, Poole's gravitational pull certainly wasn't in the Golden State Warriors' favor.

Poole quickly rose to prominence after his debut playoff series against the Denver Nuggets, averaging 21.0 points per game on an incredible 71.5% True Shooting. His production tapered off in the following two series, though he was able to maintain his outstanding efficiency with 72.7% TS in the Western Conference Finals.

However, battling against the best defense in the league on the biggest stage possible could prove to be a different type of test, and we saw it unfold on Thursday night.

Poole's Finals debut didn't go as planned. He mustered just 9 points on 2-of-7 shooting, turned the ball over four times and was a minus-19 in 25 minutes.

That's right. Golden State got outscored by nearly a point a minute when Poole was on the floor. His deficiencies were highlighted tenfold by a diligent, gritty and experienced Boston team that had the scouting report imprinted on the inside of their eyelids. The Celtics' brigade of switchy swindlers quickly turned Poole's dream-like postseason into a nightmarish scenario.

Poole's handle, sense of wiggle, fluidity and ability to create from a standstill are all special for a player his age. Some might call it unteachable. He's Golden State's most bursty creator for a reason, a player that can generate drive-and-kick magic by simply tapping the gas and zipping past his assignment to force the defense to converge. Many times, he'll use a medley of hesitation moves, head fakes and crossovers to initiate the slightest sliver of separation.

When it works, the highlights are delightful. When it doesn't, Golden State's pitter-patter motion offense quickly slips into a morass of standing around and clock-eating isolations.

Boston was all too prepared for Poole's slippery nature, shutting off the water and turning Golden State's splashy whiz kid into a dried-up basin. The Celtics effectively let Poole dribble himself into a pretzel, flashing every And-1 move in his bag to no avail. When the Warrior guard did surge downhill, Boston quickly erased that airspace by hugging him close and pressuring his every dribble, disallowing opportunities to showcase his glitzy layup package.

Always quick to clamp down on an opponent's errors, Jayson Tatum and Marcus Smart each ripped away a steal against Poole when he showed his hand and made mistakes that a 20-year-old would: failing to strike from the triple-threat position in the first quarter and later foolishly attempting a spin-move in transition, both of which can be viewed in the clips below.

Scoring-wise, Poole showed a clear perturbance versus Boston's pick-and-roll defense. Unlike Stephen Curry, Poole was unable to burn Boston with pull-ups when the Celtics unsheathed drop coverage in his presence. Playing Boston's bigs higher up the floor only further exposed Poole's limitations as a lead creator.

In the second clip from the video below, he nearly gave the phrase "buzzer-beater" a new meaning by smashing the shot clock with an errant shot after Al Horford stepped forward and shaded Poole toward the help of Smart.

Shoot, even Payton Pritchard, Boston's most targetted defender in the previous three series, was able to survive in the minutes he was matched up with Poole. Pritchard has the requisite footspeed to keep tabs on Golden State's pesky lightning rod, whereas Poole lacks the core strength that normally overpowers and forces Boston's reserve guard off the floor.

Here, Pritchard does a nice job screeching over the top of Andre Iguodala's screen and rear view, contesting Poole into one of his four misses from deep on five total outside shots.

One thing the Warriors should look to explore is involving both Poole and Curry in off-ball actions when the duo shares the floor. Doing so got Curry one of his cleanest looks of the game, and the same could easily go for Poole, who has shot 43.8% on catch-and-shoot playoff threes, should the roles be reversed. At the very least, using his scoring gravity away from the action is a far more prudent strategy than just spoon-feeding him a diet of pick-and-roll possessions in the friggin' Finals and hoping for the best.

Look, it isn't inconceivable to imagine that the 22-year-old will eventually find his footing on offense; he's too gifted of a scorer to continue this type of production. What is concerning for Golden State was just how woefully underprepared Poole looked defensively on the final stage. The Warriors got eviscerated when they played Poole alongside either one of Curry (minus-13 together) or Klay Thompson (also a minus-13 together), and his inclusion in Golden State's small-ball lineup that went minus-9 in the fourth quarter was the ultimate nail in the coffin.

Poole looked overwhelmed by every aspect of the defensive side of the ball against a battle-tested Boston ball club, which, again, is understandable for a 22-year-old playing in his first Finals. His closeouts were sloppy and led to drives down the middle of the paint. Transition defense appeared purely optional. Maybe most importantly, Boston absolutely licked its chops at the thought of involving Poole in pick-and-roll actions. Tatum was able to beat Poole off the dribble and drive to the rim even with Poole in a drop. Yeah, that's how bad it was.

Poole will be an evergreen target on defense against a Boston team that hunts mismatches like the Blade Runner, and if his offensive production can't overshadow his defensive deficiencies, Poole could quickly see his role diminish. Golden State has other options on the table if the lights prove to be too bright for the wunderkind combo guard.

The now-healthy Gary Payton II is just begging for an opportunity to muck things up versus Jaylen Brown and maybe Tatum. Otto Porter Jr. is arguably due for an uptick in minutes after his strong Game 1. Heck, even Jonathan Kuminga or Moses Moody could be worth a look should Boston's size and athleticism continue to bewilder Golden State's elder group.

Poole's meteoric rise has been something to behold, quickly establishing himself as one of the league's brightest up-and-coming stars after a sterling postseason. Boston and its titanium defense represent a whole new challenge, and an uptick in his production could very be the catalyst to Golden State hoisting the Larry O'Brien trophy in a few weeks' time.

With the Warriors in a 1-0 hole, Jordan Poole is now more than ever the ultimate X-Factor. What remains to be seen is which team, Boston or Golden State, will enjoy the spoils of his output.