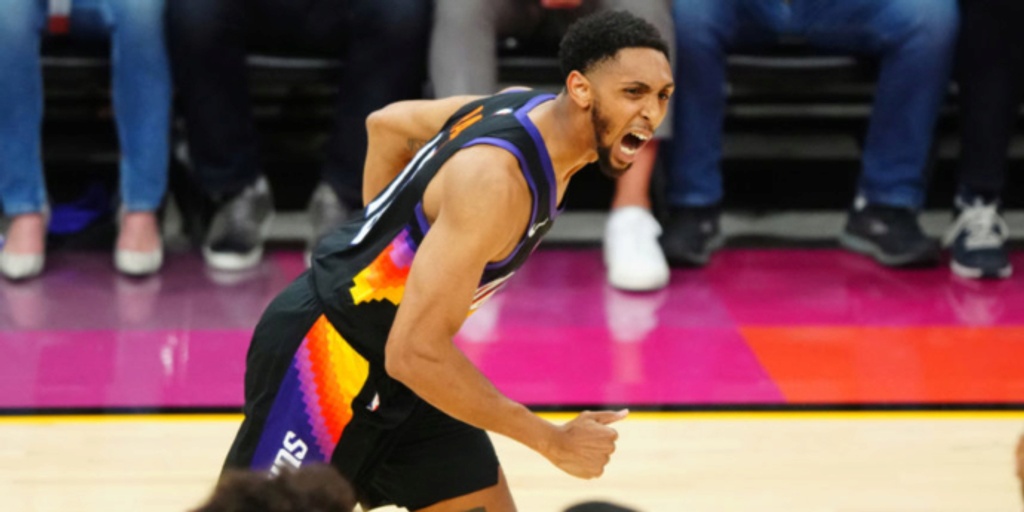 Cameron Payne signed a three-year, $19 million deal with the Phoenix Suns last month. The 27-year-old point guard confirmed that he could have received more money from a different team, but he never seriously considered leaving Phoenix.

The Suns gave him an opportunity when it seemed like his days as a professional basketball player were numbered, so he wanted to remain loyal to them.

“It got me back into the NBA. I feel like I gotta pay the favor back, even though I don’t have to,” Payne told Arizona Sports 98.7. “Man, it changed my life. And it’s only right for me to just ride it out with Phoenix as well. Monty [Williams], a great coach, he been coaching me up this last year and in the Bubble. I just love it, I love it out there. I just had to stay, I had to.

The New York Knicks were among the teams to express interest in Payne, who reportedly could’ve earned around $10-12 million annually had he decided to test the market.

Payne was one of the feel-good stories of the 2021 NBA Finals, emerging as a significant contributor for Phoenix on the biggest stage just one year after being out of the NBA.

Looking back at Payne’s career, he’s had a unique journey with plenty of ups and downs.

After two outstanding seasons at Murray State – including a sophomore year in which he averaged 20.2 points, 6.0 assists, 3.7 rebounds, 2.4 threes and 1.9 steals – Payne was the No. 14 pick in the 2015 NBA Draft by the Oklahoma City Thunder. Despite being a lottery pick, he had a limited role in OKC since he was behind Russell Westbrook on the depth chart and the team was in win-now mode, advancing to the Western Conference Finals during his rookie year.

After two seasons, the Thunder dealt Payne to the Chicago Bulls in a five-player trade (which brought Taj Gibson, Doug McDermott and a 2018 second-round pick to the Thunder). Payne split time between the Bulls and their G League affiliate for two years, and he struggled.

In 2017, a Bulls source famously told the Chicago Sun-Times: “We knew the second practice [after he was acquired] that he couldn’t play at [the NBA] level. The only reason it took two practices was because we thought maybe it was nerves in the first one. Any coach who says differently is lying."

Payne was still on Chicago’s roster when a team source made those comments, and he would stick around for another year-and-a-half after that article was published. Bulls fans were heavily critical of Payne too, nicknaming him the "Tank Commander."

"Because fans think he might be the worst player in the league. Fans couldn’t wait till Payne made his return [from injury], because then the team would lose more games because of him,” wrote Daniel Greenberg of the blog Pippen Ain’t Easy.

In January of 2019, the Bulls waived Payne. He ended up inking a pair of 10-day contracts with the Cleveland Cavaliers. He went from earning $3,263,294 from his rookie-scale contract to making just $177,062 from the Cavaliers’ 10-day deal. After his second 10-day contract expired, Cleveland decided not to sign him for the remainder of the season. The Toronto Raptors briefly signed Payne, but then they waived him 11 days later after just one preseason appearance.

At this point, Payne signed with the Shanxi Loongs of the Chinese Basketball Association. However, after two months with the team, he had played in just two games (averaging 22.5 points, 7.5 assists, 6.0 rebounds and 4.5 steals). And he only appeared in those two games because one of his American teammates, Jamaal Franklin, got hurt. Payne was riding the bench with Shanxi due to CBA rules that restrict American players. The Loongs ultimately replaced Payne with Franklin once he got healthy, ending his stint in China.

This was rock bottom for Payne. Even in China, he was viewed as a reserve and ultimately got cut. He was only 25 years old, but he started to wonder if his professional-basketball career was nearing an end.

Payne was out of the NBA – out of pro basketball entirely – just four years removed from being a lottery pick. He knew that the average NBA career lasts roughly four seasons, and it’s something that he thought about often.

Most players (especially lottery picks) can't imagine their career fizzling out after a few seasons. Keep in mind, every NBA player has already achieved the impossible by making it to the league. At some point, they were surely told that making it to the NBA was unrealistic. After all, only 0.03% of high-school-senior players go on to play at this level. You don’t earn one of the 450 NBA roster spots without having enormous confidence and self-assuredness. Of course most players expect to stick in the NBA long-term and have a legendary career; after all, aiming for the stars and refusing to be "realistic" is what got them to the league in the first place. In their mind, failure isn't an option.

Until... it is. Once a player starts struggling and their career isn’t going as planned, it can be devastating. When a Chinese Basketball Association team cuts you and nobody shows interest in signing you, it’s not just humbling – it’s heartbreaking.

After Shanxi replaced him, Payne returned home to Memphis to train and weigh his options.

“It kind of hurt to go back home, and everybody asks you, ‘What you doing? Who you playing with next year?’ It would be questions like that, that kind of [frustrated me],” Payne recalled. “You're like, ‘Man, I ain't really trying to answer that question...’ Obviously, I'm trying to make a team. People asking, ‘What you doing? Who you going to play with next year?’ is always in the back of my head when I'm working out because I never want to be back at the bottom, going to China and stuff like that.”

Payne ended up joining the Texas Legends of the NBA G League in hopes of getting called up by an NBA squad. He had thrived against G League competition before, averaging 20.2 points, 5.5 assists, 3.9 rebounds, 2.4 threes and 1.8 steals in 10 games as an affiliate player with the Oklahoma City Blue and Windy City Bulls.

This time, he dominated.

During the NBA’s COVID-19 stoppage, Payne finally got the call he’d been praying for: Phoenix wanted to sign him and bring him to the Bubble in Orlando. Suns head coach Monty Williams was on the Thunder’s coaching staff when Payne was a rookie, and he had worked closely with the young point guard.

He hasn’t looked back since.

In the first round of the 2021 NBA Playoffs against the Los Angeles Lakers, Payne stepped up in a major way after Chris Paul hurt his shoulder. He ran the team smoothly in Paul's absence, averaging 12.5 points, 3.3 assists, 3.0 rebounds, 1.2 steals and 1.0 blocks (while shooting 42.3% from three and 100% from the free-throw line).

With Paul sidelined due to COVID-19 in the Western Conference Finals, Payne had the best game of his career: 29 points, 9 assists, 2 threes, 2 steals, 2 blocks and 0 turnovers. He picked a great time to go off, as Phoenix won 104-103 and took a 2-0 lead in the series.

He helped the Suns advance to the NBA Finals, where they came within two wins of hoisting the Larry O’Brien trophy against the Milwaukee Bucks. During the Finals, Payne was asked about his journey and his support system that helped him along the way. He shouted out his mother, LeShawn.

“She's seen what I've been through; she's seen everything I've done,” Payne said of his mother. “She's just as excited and happy and feels so much for me because she knows what I've been through. She knows it ain't been an easy road. She's seen me cry on a hospital bed, thinking it was over... It's unbelievable. It's crazy. It’s almost like a dream-come-true type of thing.”

One year ago, if someone told Payne that he’d play a key role in the 2021 NBA Finals, would he believe them?

“Absolutely not! To be honest, when I first signed, I just wanted to be able to get some time in the Bubble and try to make someone's roster this season,” Payne admitted. “I didn't think all this was going to come about, us making it to the Finals. I kind of felt like we were going to be able to make the playoffs, but here? No, not even a little bit. It's a crazy roller-coaster, this thing here.

“Life's crazy. I just put the work in, put the time in, prayed on it, everything, and I'm just going to keep on doing the same thing.”

While the Suns came up short in the Finals, they’re bringing back all of their key pieces and adding some reinforcements (such as JaVale McGee and Landry Shamet). Also, aside from Paul, many of their best players are age-25 or younger – including Devin Booker (24), Deandre Ayton (23), Mikal Bridges (24) and Cam Johnson (25). That means they should continue to improve, especially after playing the postseason for the first time.

Not long ago, Payne was desperate for any team to give him a shot. Fortunately for him, the only team that expressed interest just happened to put him in the perfect situation: playing key minutes on an NBA-Finals team, while learning from an all-time great point guard and an outstanding head coach whom he adores with a system that is a terrific fit for his game.

Payne knows what it’s like to be ostracized by the NBA, wondering whether he’ll have to look for non-basketball work. Over the last year, he played like someone who never wants to be in that position again, and it paid off with the biggest contract of his career and job security that he’ll never take for granted.