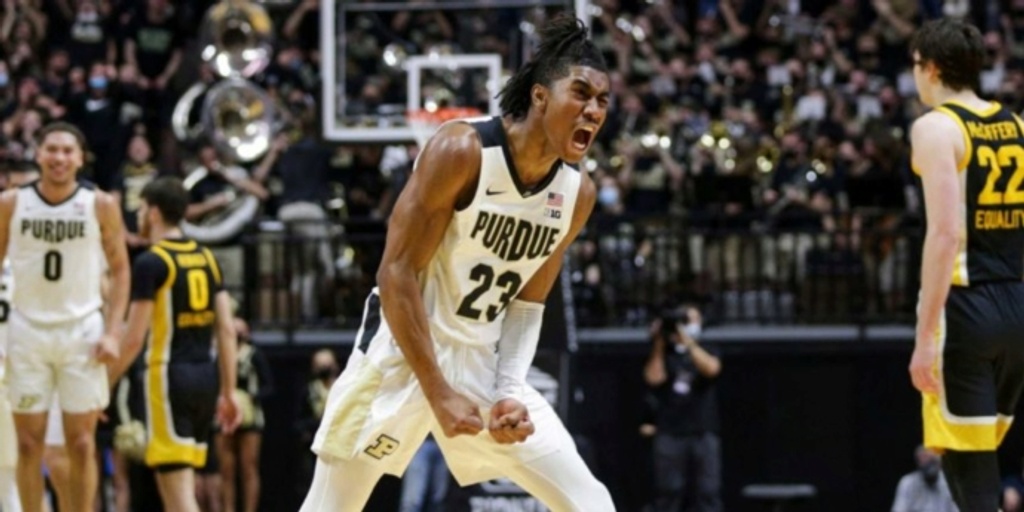 Purdue is No. 1 in The Associated Press men’s college basketball poll for the first time.

The Boilermakers were a unanimous No. 1 in the poll released Monday to move up from No. 2 last week. Reigning national champion Baylor moved up to No. 2, with Duke, UCLA and Gonzaga rounding out the top five.

The Boilermakers routed Florida State last week and opened Big Ten play with a 77-70 win over Iowa on Friday, sliding into the top spot after previous No. 1 Duke lost to an unranked Ohio State squad that is now No. 21. Until this week, Purdue had the second-most appearances in the AP poll — 379 weeks — for a school that had never been ranked No. 1 (Maryland, 434 weeks).

“They deserved to be No. 1,” Iowa coach Fran McCaffery said after the loss to Purdue. “They can hurt in so many ways. They have depth, experience and size. It’s going to be a hard team to beat.”

Purdue was knocked out in the first round of last season’s NCAA Tournament, but returned its top eight scorers, including all-conference forward Trevion Williams. The Boilermakers can challenge teams in variety of ways, from sophomore guard Jayden Ivey attacking off the dribble to dropping the ball in the post to 7-foot-4 sophomore Zach Edey.

Purdue is winning by an average of 25.6 points per game, the closest being the seven-point win over Iowa.

“You want to get in close games and win them,” Purdue coach Matt Painter said. “It really helps you through the season.”

Gonzaga plays one of the nation’s most difficult nonconference schedules every season and this year has been no different. The Zags (7-2) typically win the big early-season showdowns, but haven’t been able to do it with as much frequency this year as they try to integrate several new players.

Gonzaga looked unstoppable in early wins over Texas and UCLA. The Zags weren’t so dominating their last two games against AP Top 25 teams, losing to Duke in Las Vegas on Nov. 26 and No. 16 Alabama in Seattle on Saturday.

“I just think we have to have more of a sense of urgency,” Gonzaga big man Drew Timme said. “We just got to fix it. But we’ve got a lot of time to fix it. We’ll be fine.”

Alabama (7-1) had the biggest jump in this week’s poll, climbing seven spots after their win over Gonzaga. Southern California was next, moving up four spots to No. 16 following wins over Utah and Washington State last week.

BYU had the biggest drop, losing 12 spots to No. 24 after losing to Utah State in overtime and scraping past Missouri State 74-68. Florida lost six spots to No. 20 following a seven-point loss to Oklahoma.

Ohio State moved back into the Top 25 after its win over Duke. The Buckeyes had dropped out of the Nov. 22 poll following a loss to Xavier.

No. 25 LSU is ranked for the first time in nearly two years after stretching its undefeated start to eight games with a win over Ohio last week.

Memphis dropped out of the poll from No. 18 after stretching its losing streak to three games with losses to Georgia and Ole Miss.

Michigan fell out from No. 24 after scoring 51 points in a 21-point loss to North Carolina. The Wolverines had been as high as No. 4 this season.