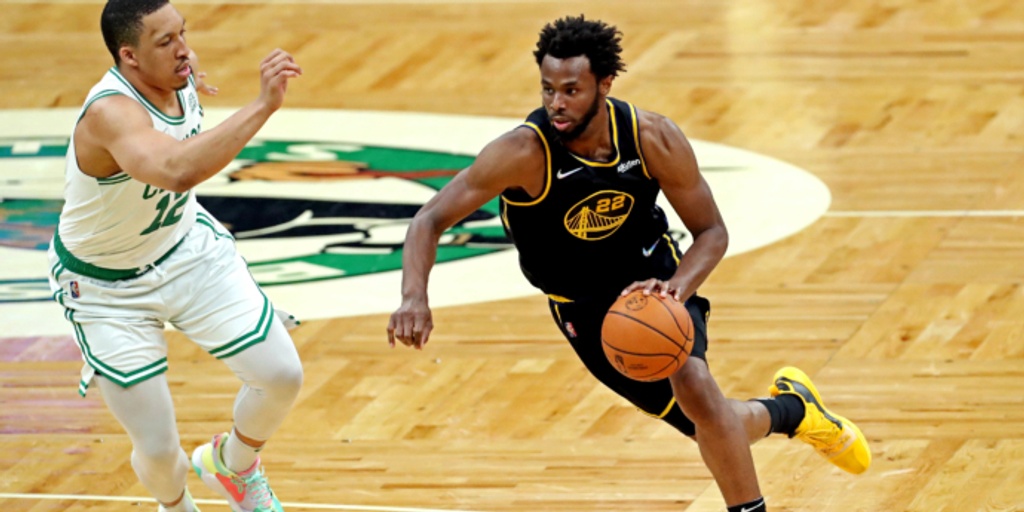 How Andrew Wiggins changed his career trajectory with the Warriors

Andrew Wiggins was once touted as the next in line behind LeBron James. The Canadian teenager nicknamed “Maple Jordan” would become a phenom because of his jaw-dropping highlights that showcased his breathtaking athleticism. Once Wiggins arrived at the University of Kansas, the hype didn’t die down as NBA fan bases were hoping to “tank for Wiggins” in order to save their franchise.

Wiggins’ NBA career began with a bang, as the Cleveland Cavaliers drafted him No. 1 overall in the 2014 NBA Draft before proceeding to trade him to the Minnesota Timberwolves for Kevin Love after James decided to sign with the Cavs.

Unfortunately for Wiggins, he was never able to consistently play at a star-caliber level while in Minnesota. He showed flashes, but the pressure and expectations seemed to overwhelm him.

The Timberwolves still decided to sign Wiggins to a rookie-scale max extension, which shocked some executives around the Association. Soon after, the inefficient Wiggins had a contract that was viewed as an unmovable albatross in trade talks. It eventually became Minnesota’s top priority to shed Wiggins’ salary, which led to another trade for the 24-year-old. Wiggins was dealt to the Golden State Warriors in exchange for D’Angelo Russell, and the Timberwolves even had to include a lightly protected future first-round pick in the deal due to his contract.

Now, on the biggest stage of his career, Wiggins is proving the naysayers wrong. The former No. 1 pick is shining within his simplified role, making his presence felt on both ends of the court during the Warriors’ NBA Finals run.

With Golden State, Wiggins’ job is to be a pest on defense and knock down open shots. He’s done exactly that, especially throughout the 2021-22 campaign, hitting 39.8% of his catch-and-shoot threes. In the postseason, Wiggins is averaging 16.0 points, 7.3 rebounds, 1.7 assists, 1.0 blocks and 0.9 steals on 54.8% True Shooting. Aside from Stephen Curry, Wiggins has arguably been the Warriors’ most impactful and consistent rotation piece throughout the postseason. What Wiggins is accomplishing right now isn’t lost on head coach Steve Kerr, who has helped the 27-year-old get the most out of his tantalizing talent.

“He’s a very mild-mannered guy, but he’s taken a leap in these playoffs in terms of his impact on the game defensively,” Kerr said. “The biggest thing is he’s a two-way player.”

In the Warriors’ Game 4 victory over the Boston Celtics, Wiggins was instrumental, putting together an incredible effort on both ends of the court. Curry stole the show with 43 points, but Wiggins tallied 17 points and 16 rebounds while also hounding Jayson Tatum and Jaylen Brown as an on-ball defender. Incredibly, the Warriors were +20 with Wiggins on the court, and -10 in the five minutes he sat on Friday.

Wiggins continuing to improve and realize his potential has been one of the best storylines to follow throughout this postseason. While his stats are similar, Wiggins is proving his worth in the games that truly matter most. Two-way wings are the most valuable player archetype in the modern NBA. Wiggins is not the superstar that fans hoped he'd be when he entered the Association, but he stars within his role as a secondary option. Wiggins' maturation is happening in real time, and he helped flipped the series momentum back to Golden State with a title on the line.

“Wiggs was fantastic,” Kerr said after Game 4. “To go against Boston, you've got to deal with Tatum and Brown, and they are just powerful, skilled players [with] great size. They are coming downhill at you constantly, so we had to have Wiggs out there. I thought he was great defensively.”

Proving that he can thrive in the postseason bodes well for the next chapter of Wiggins’ rollercoaster career. It finally feels like he’s found solid footing, especially now that he's playing within a perfect system to maximize his strengths. He has bought in completely as a third or fourth option, yet he can also step up and deliver big performances when his team needs him most.

“I want to win,” Wiggins said about his career-high 16 rebounds after Game 4. “I know rebounding is a big part of that. I just want to win and I feel like sometimes we play small. So, I just decided to go out there and rebound, help the team out.”

Throughout Golden State’s triumphant return to the Finals, Wiggins leads the Warriors in adjusted net rating (+9.0 NetRtg on-court; -6.8 NetRtg off-court). Wiggins is extremely valuable and he fits seamlessly alongside Golden State's three future Hall-of-Famers in Curry, Thompson and Green. And who knows, he could be the veteran who leads the next era of Warriors basketball along with Jordan Poole, Jonathan Kuminga, Moses Moody and James Wiseman.

At 27 years old, Wiggins’ prime is on the horizon. If this postseason run is any indication, Wiggins may have one of the most incredible career arcs of any player in recent memory. Wiggins has become a key cog to the Warriors’ machine and it wouldn’t be functioning right now without him.