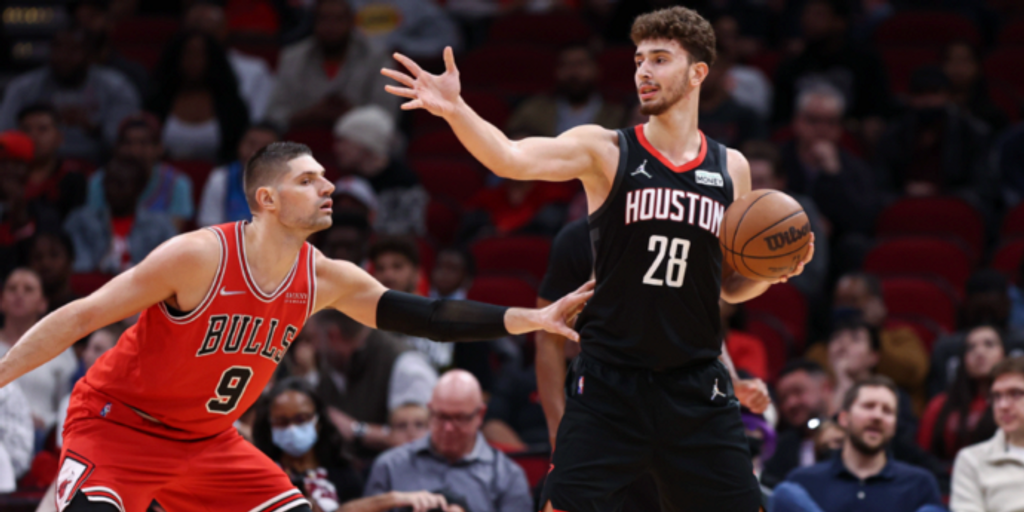 Alperen Sengun has always been an intriguing prospect to follow since he entered the NBA. Acquired by the Houston Rockets during the 2021 NBA Draft for two future first-round picks likely to convey in 2023 (via the Wizards) and 2025 (via the Pistons), Sengun instantly became an integral piece to the next chapter post-James Harden.

Exiting the Harden era, Houston is in the midst of a full-scale rebuild, building around young players such as No. 2 overall pick Jalen Green and Sengun. With Green sidelined due to injury, Sengun is beginning to take the spotlight and shine under the bright lights.

As a unique, throwback player, Sengun brings a crafty style to the basketball court based around footwork in the post, savvy playmaking and strong rebounding ability. Recently against the Milwaukee Bucks, Sengun's interior footwork was dazzling to watchm as he continously punished his matchup around the basket on countless possessions. Eventually, Bucks head coach Mike Budenholzer had to adjust and put Giannis Antetokounmpo on Sengun. A small moment, but one that provides a glimpse into a potential future outcome for the Rockets' rookie.

Expected to have an adjustment period to the NBA after winning the Turkish League MVP at age-18, not many expectations were laid upon Sengun in Year 1 — especially as a reserve big man. Recently though, he’s flashing an extremely high ceiling that has many within the Rockets organization giddy for his next developmental steps.

Sengun’s season averages don’t scream "breakout campaign," but, when placed into a per-36 minute workload, it changes the equation: 17.9 points, 9.2 rebounds, 5.2 assists, 2.1 steals, 1.5 blocks while carrying a 57.9% True Shooting percentage.

Ready for a crazy statistic revolving around Sengun? Here are the only players joining the Turkish rookie amassing at least 9 rebounds, 5 assists and 1 block per 36 minutes: Giannis and Draymond Green.

If Sengun is allowed to further spread his wings later this season, there’s a real trajectory path to him becoming a member of the First-Team All-Rookie lineup. Sure, there will be some ups-and-downs in terms of inconsistency along the way, but the bright spots make up for all of it.

There is something in the way of Sengun receiving heavy minutes however — the two bigs currently ahead of him on the Rockets’ depth chart: Christian Wood and Daniel Theis, a pair of veterans who are heavily mentioned in trade talks around the Association. Our own Nekias Duncan recently wrote a piece regarding potential destinations for Wood, who would be an instant-impact piece on a legitimate playoff contender. Theis is another piece who could help boost the depth of a contender as well, providing floor-spacing and defensive versatility.

Sengun’s ceiling already looks similar to ones we’ve seen enter the NBA before. Nikola Jokic, Domantas Sabonis and Nikola Vucevic all play a similar game as the young Sengun. If the Rockets properly construct a versatile roster around Sengun, he could help the organization reap significant benefits soon enough.

Houston’s goal is to construct a sustainable winner with multiple hits on draft picks. Green looks the part of a future 25-point-per-game scorer. Sengun could be the hub of an entire offensive system, a la Sabonis. Kevin Porter Jr. is an offensive spark plug himself. Jae’Sean Tate, Josh Christopher and Usman Garuba all look like valuable depth pieces of the next great Rockets era as well. Houston still has considerable distance to being a real threat in the Western Conference playoff picture, but the foundation is coming along together at a quicker pace than expected.

If the Rockets are lucky again in the lottery, could you imagine Auburn’s Jabari Smith alongside Sengun providing defense and transition scoring? What about Duke’s Paolo Banchero as a frontcourt partner for Sengun? This was initially expected to be a rebuild that lasts awhile, but one or two moves could truly change the whole equation. Having a big man like Sengun as an anchor is a very promising start to it all, and one who can seemingly provide a little bit of everything on the basketball court for the Rockets.

The buzz around Sengun is palpable, and he’s slowly but surely making his way up the top rookie ladder. By season’s end, Sengun could be alongside Evan Mobley and Cade Cunningham for Rookie of the Year honors — particularly if he's given more of a runway, with Wood and Theis moved elsewhere.