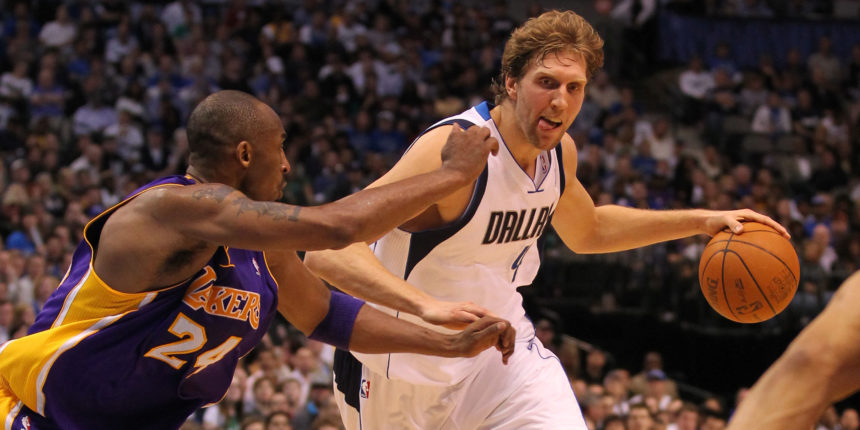 After Dirk Nowitzki won his first NBA title, Kobe tried to recruit him

When Dirk Nowitzki won his first title in 2011, his fame reached an all-time high. After suffering defeat several years before, Nowitzki toughened his mettle and kept on fighting for that elusive Larry O’Brien trophy. When he got it, not only did he forge himself as one of the greats, but he also caught the eye of a fellow legend.

According to Nowitzki, Kobe Bryant himself tried to recruit him after winning the title in 2011. Nowitzki shared that they had several exchanges. The German was a free agent at that time and was likely keeping his options open. But eventually, Nowitzki chose to continue donning the Mavs jersey.

“I never really got many pitches because everybody knew I kind of loved Dallas and I wanted this to work. I remember Kobe Bryant one year reached out to me, it was obviously an honor," Nowitzki told ESPN in April 2021. "I think this was after I won the championship and my four-year deal was done. Kobe was still doing his thing in L.A. We talked, we texted back and forth, but I told him, ‘Listen, I’m sorry and you know how it is. Dallas is my city and my home and it would feel super weird to put a different uniform on.’ And I think he totally understood that; I think he respected me more after that."

The Mavs made sure to keep Dirk

Bryant shared his side of the story in 2019. According to Kobe, he was well aware that there was no chance of Nowitzki leaving Dallas. However, he couldn’t help but pitch the idea of them being teammates. To recall, Dirk and the Mavericks prevented Bryant and the Lakers from completing the three-peat. Kobe was well-within his prime and was gunning for his sixth title. But when Dirk said no, it immediately dawned on Kobe that the German was right. Dirk will forever be a Maverick and Kobe will forever be a Laker.

It would be interesting to know Bryant’s headspace during that time. Was he also trying to arrange a superteam as James did with the Heat? Was he trying to pull a Kevin Durant even before the forward did it? Who knows? Whatever the case may be, it’s safe to say that it was for the best the two superstars remained loyal to their respective teams.

Willy Hernangomez: 'My best version as a player is yet to come'
46 min