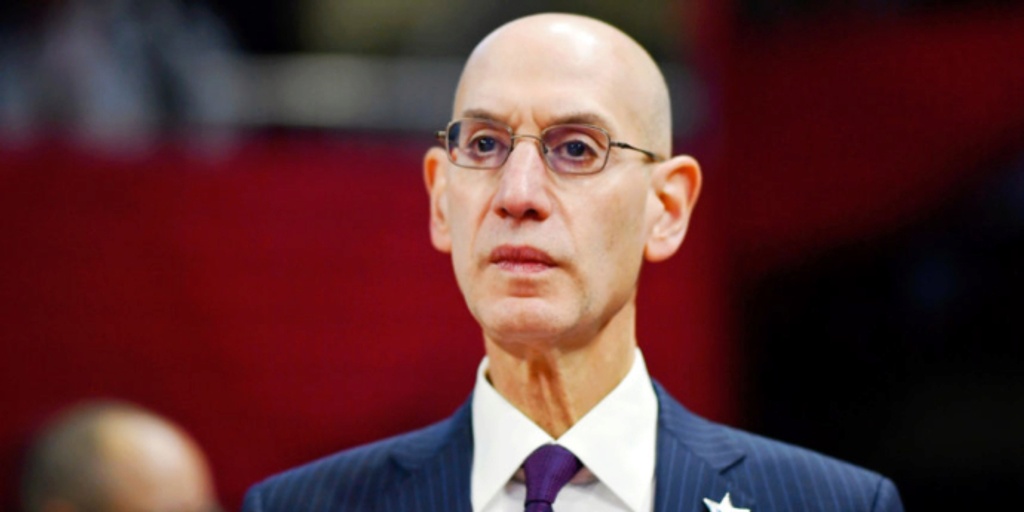 Adam Silver cautious about predicting return to normalcy next season

And that is a BIG maybe.

Cautiously optimistic, NBA Commissioner Adam Silver held his annual All-Star Weekend news conference on Saturday and addressed a number of topics -- from officiating (the refs are hearing things they normally would not hear) to vaccine plans (no players have received them, to the best of his knowledge) to 18-year-old players potentially being allowed back into the draft in the future.

But the overriding theme was Silver’s hesitancy in making any grandiose planning statements that would be out of touch with the reality he faces on a daily basis.

“One thing we’ve all come to understand over the last year is that the virus is firmly in charge," Silver said. "We need to adjust to circumstances as they present themselves.”

Nearly a full year after the basketball world and the world at large effectively shut down and went into hibernation mode, the coronavirus pandemic continues to impact all manner of planning decisions, short-term and long-term. Silver more or less parroted what we have heard from governmental leaders and health authorities as the pandemic has fundamentally changed the way people live their lives: the future will be better and there will be something resembling the norms we took for granted, but putting a specific timeline on it may end up just being an exercise in frustration.

So, Silver would not do it.

Like a player with a stubbed toe, the commissioner is day-to-day.

And you know what? He doesn’t have a choice. But that is actually what made his nearly hour-long news conference somewhat refreshing. The man clearly knows that of which he speaks, even if he lacks some of the extroverted mannerisms of his late predecessor, David Stern. But Silver has been running the show for seven years now, and he seemed cautiously optimistic at best that the NBA will be back to playing in front of sold-out arenas by sometime next season.

As for this season?

There won’t be any bubbles for the playoffs, and if a playoff team becomes infected during the postseason, there is really no plan for what might happen. In all fairness, neither Silver nor anyone else in the NBA are at fault for being unable to anticipate all possible eventualities, but it was telling that Silver was explicitly asked what would happen in such an instance and had no answer.

He responded to that very pointed inquiry by rambling about the benefits of getting vaccinated. Although getting vaccinated has its benefits, the answer did not address what many would consider to be a bit of a doomsday scenario. The planned playoff schedule is tight, which allows the postseason to conclude just in time for players to participate in the Olympics. An unexpected outbreak would bust up that timeline.

Maybe Silver didn’t answer because he does not know the answer -- the guy has learned how to think and adapt on a day-to-day basis for nearly a year now -- but the non-answer to a very fair question left us pondering yet another “what if?”

And so, the long, dark winter continues for the NBA community.

The monotony of the season will be broken up by Sunday night’s All-Star game, but even that received blowback from some of the league’s top players -- at first they weren’t going to have one, and then the plan was changed. That brought forth criticism from LeBron James himself, the face of the league. But Silver took it in stride.

“It would be incredibly hypocritical of me to say to LeBron [James] that you should speak out on issues that are important to you, but not ones when you’re critical of the league," Silver said.

“We’re all part of a community. I respect him and his point of view. Also, at the same time, I appreciate his professionalism. If you had a chance to see him -- as captain and general manager of his team -- proceed with the draft, he did it in good humor. He took it very seriously. My sense is he’s going to be here, as he always is, as a top-notch professional and engaged in the game.”

At the end of the day, it will be a blessing to have something to deflect our collective attention.

One thing we tend to forget about All-Star games is that they actually often get interesting by the time the fourth quarter rolls around, as long as the game is competitive. And that is something that will be refreshing to see, because mid-winter regular-season NBA games without enough “it” teams to focus on can seem pretty run-of-the-mill. The All-Star break is typically a reset that prepares everyone for the good stuff that lies ahead, and we’re eventually going to get that the same way we got great basketball from the bubble last summer when every single game was meaningful.

This will be LeBron James’ 17th All-Star game, and he has started each and every one of them. Zion Williamson, 20, will become the fourth-youngest All-Star ever behind Kobe Bryant, James and Magic Johnson, respectively. This will be the 70th edition of the game, which is a kick in the head to those of us who covered the NBA’s 50th All-Star game in Cleveland 20 years ago. Back then, 49 of the 50 players who were honored as the greatest in league history in 1996 attended, with the deceased Pete Maravich being the only one missing.

The best we can hope for, especially in this particular season of the quick whistle, is a tight game that inspires players on both teams to play some defense -- a lost art due to rule changes that have made the sport too offensively oriented. Anyone who has watched more than a smidgen of games this season has noticed the preponderance of ticky-tack fouls and quick-tempered officials whistling too many technicals, something Silver attributed to being a side-consequence of the work quarantine protocols that everyone in the community is following.

“In terms of the data, which we obviously look very closely at, there’s nothing aberrational happening, whether in terms of accuracy of calls or number of technicals on the floor. But I will say everyone is under enormous pressure this year," Silver said. "The officials aren’t exempt from that. They are also operating under our sort of work quarantine protocols.

“One of the things we’ve learned over the last year is that the mental stress is incredibly tough on everyone involved. I think in some cases you have some younger officials, too, who maybe are still trying to calibrate their relationships with players. So I’m not particularly concerned necessarily with the calls on the floor. I’m always concerned about the members of our larger community and how they’re interacting with each other,” he said.

Referees, just like players and team officials, are quarantining at home or at hotels when they are on the road. Too much confinement and desocialization has discernable side effects, as Silver noted.

But at least he offered some hope.

“I’d say maybe for the first time in the past year, I’m fairly optimistic right now that as we see fans returning to our arenas, as we see public health officials across the country begin to open up sporting events, theaters, restaurants, other forms of entertainment, I feel pretty good that we’re going to continue apace,” Silver said.

“By the time we reach the playoffs in mid-May, things will even be considerably better than they are now. Also, obviously here in the United States, we’ve been making excellent progress in terms of vaccinations. That will be very helpful in getting people back in the arenas.”

But he said nothing about full capacity, which should serve as a reminder that pandemics do not last weeks or months. They can last years. Anyone who tells you exactly when normalcy will return does not know what they are talking about.

So we have what we have.

Six of this year’s All-Stars are European, where players often turn pro as teenagers. That was something Silver noted when asked about the recently announced startup league that would pay high school age players, which left you with the distinct impression that Silver does not seem to have a problem with it.

Whether he and the NBPA will do away with the one-and-done rule anytime soon is a gray area, despite Condoleezza Rice leading a commission that recommended the one-and-done rule be removed. Silver and NBPA director Michele Roberts have met personally with Rice to hear her thoughts, yet the issue somehow remains in the realm of collective bargaining when it probably should just be a mutually agreed upon change invoked immediately.

But one thing we have learned over the past year is that nothing is immediate. We all have to wait this thing out, and having an All-Star game Sunday night is better than having no All-Star game.

If all goes well, we have an NBA champion and an Olympic champion by mid-August, along with free agency and a draft and a normal September with training camps.

All we can do is hope that we get there safely and stay sane along the way.