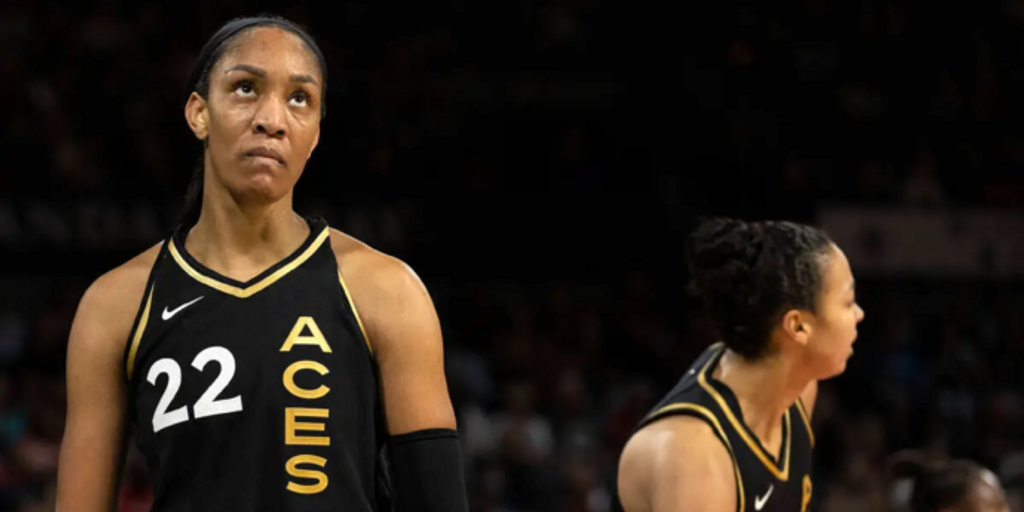 Aces must clean up 'little things' to regain control of series

With 6.8 seconds left in Game 1, the top-seeded Las Vegas Aces needed a bucket to stay alive.

Down three, 2022 Coach of the Year Becky Hammon drew up "Winner", a nifty end-of-game set most recently popularized by former Celtics head coach Brad Stevens, if you care about that kind of background.

The set calls for a big to receive a cross screen before receiving a long inbound pass from the opposite sideline. After the big receives the pass, a perimeter player is tasked with coming off a screen above the break. If timed and executed correctly, an open three-point shot should be created. When it's run well, it looks like this:

This is what happened when the Aces ran it.

Jackie Young doesn't even set the cross screen for A'ja Wilson; she essentially "ghosts" the screen and jets to the corner. While that's being whiffed, Chelsea Gray -- one of the best passers on the planet -- throws the pass where Wilson is supposed to be. She wasn't, so that leads to some bobbling of the ball.

While that is happening, Kiah Stokes is setting the second of a pair of screens for Kelsey Plum. She sets one during the cross screen segment of the play to occupy Tina Charles (and bump Sue Bird), then flips the screen to the opposite side to free Plum for the actual shot. Stokes doesn't get a ton of contact on the first screen, and flat out misses on the second; the latter allows Bird to duck under Stokes and contest Plum's shot.

The look was still a solid one for Plum, a testament to how good the play call was. But the fact that it was a solid look instead of an open one speaks to a lack of thoroughness. The screening was off. The timing was off. Enough of the little things were mishandled to minimize the effectiveness of the play.

Would Plum have drained a three if the second screen from Stokes connected, allowing Plum to sip a cup of coffee due to being so open? We don't know. Great shooters miss great shots, and Plum very well could've missed it either way. It's just a shame that we didn't get a chance to find out.

Compare that to this clutch bucket by Jewell Loyd to give the Storm a 73-71 lead.

The Storm set up a high ball screen because they know the Aces would switch the matchup. Once Breanna Stewart drives Young back and draws a double team, Stephanie Talbot cuts from the left wing to the right corner to distort Gray's help responsibilities. Sue Bird recognizes this and fires a pass to Talbot. She's able to attack a flustered Stokes from there, and the rotations to help on that drive free Loyd for a crucial shot.

Everything was done with intention.

The final score, a 76-73 win for the Storm, doesn't properly indicate how much better the Storm's execution was on both ends of the floor. That the Aces still had a chance to win is a testament to their talent and willpower. They'll simply need the execution and attention to finer details to turn things around in Game 2.

"I think the biggest thing we have to work on is our defense," Aces center Iliana Rupert said after practice on Tuesday.

"We made a lot of little mistakes, especially in transition. At one point, I think they scored six straight points, basically off of layups. When it comes to a game decided by a few points, you think about those actions."

"We only lost by three points, and we did so many things wrong," Stokes said.

"We gotta focus on cleaning up the little things, being a little sharper, and hopefully get rid of the stupid turnovers, fast break points, and things that we can control."

On the defensive front, the Aces never seemed to have a firm handle on the Storm's offense. They shot poorly, but their shot quality was pretty high. It especially stood out in the opening quarter, where the Aces reverted to their trapping style of ball screen coverage they displayed to begin the season.

"Our intention was to get the ball out of Jewell's hands when she was coming off a screen, but she did a great job of baiting the trap and getting rid of it early," Stokes told Basketball News.

"I think going forward, it's going to be more mixing things up and keeping her on her toes; keep her guessing between us trapping or short-hedging. Our focus point now is making the guards uncomfortable so they don't know what we're doing, make 'em think. It's easy, if you know we're going to trap, to one-dribble towards the screen, back away, kick it to Tina [Charles] and then they have open shots. Luckily for us, they missed those shots, but we don't want them to have those looks because they're a great team."

"They know how to attack every defense, and I think they quickly understood the changes we made [to begin the game] and knew how to adapt. They had open looks -- luckily they didn't make them -- but that's why we changed a little bit [after the first quarter.]

You can get a feel for how quickly the Storm picked apart the Aces' aggressive scheme below. These aren't all makes, but they're all quality looks.

Offensively, the Aces didn't have a ton of success. It's easy to point to their 6-of-23 clip from three and dub it as an anomoly. It may be, but the larger issue was the quality of those shots.

The offense as a whole didn't function particularly well. The Storm threw a wrench into the Aces' plans by flat-out ignoring Stokes away from the ball. That made it easier to load up on Wilson, who finished the game with eight points and a more-disturbing 10 shot attempts. Wilson only attempted one shot in the fourth quarter.

"The dunker or short corner is where I'm going to get most of my open shots," Stokes told Basketball News.

"One thing we did notice was that my defender wasn't really guarding me; they were acting more as a helper. So if I continue to cut and at least occupy the defense, it's either going to give me an easy layup or it'll allow A'ja to go 1-on-1 instead of 1-on-2; Kelsey [Plum] will be able to get downhill against one [player] instead of one and the big coming over to help."

The opening possession of the game was a great example of the opportunities that were, and will be, available for Stokes.

It's a good design from the Aces. They stack the right wing with Young and Stokes while Gray, Wilson, and Plum occupy the left side of the floor. A Gray-Wilson ball screen with Plum in the strong side corner -- and Wilson rolling to Plum's side -- is a great way to put Bird in a bind as a helper.

Ideally, Bird would have to choose between tagging Wilson on the roll and leaving Plum open, or sticking with Plum and giving Wilson an open lane to roll into. It doesn't really work becuase Charles is parked at the free throw line to cut off a potential drive from Gray. Stokes does a great job of cutting behind the help, but misses the layup.

Stokes will have to capitalize on those openings. On a basic level, duh, you want players to make open shots. But Stokes has to nail those shots so the Storm aren't comfortable ignoring her. That will open the floor for everyone, which in turn will make life more difficult for the Storm.

Cutting will help. Flashing to the middle of the floor is another counter to keep an eye on. Stokes attempted a middle flash to set up a high-low with Wilson, but Stewart made a DPOY-level play by anticipating the entry pass and picking it off.

It didn't work out, and it took a little long for things to set up for my liking. But it's more low-hanging fruit for the Aces to grab. If they're able to do so, we're going to have a fun series on our hands as things shift to Seattle.