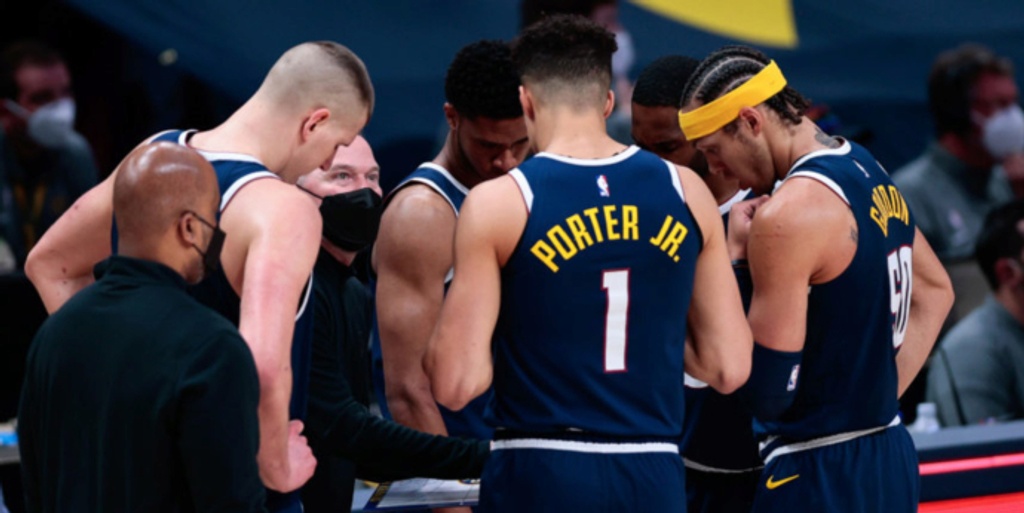 2022 NBA offseason preview: What's next for the Denver Nuggets?

Watching the 2021-22 Denver Nuggets, it’s impossible not to imagine what this team could have achieved had it been at full strength.

After all, how many teams could lose two max-level players and still manage to win 48 games and secure the Western Conference’s sixth seed?

During the Nuggets' first-round series against the Golden State Warriors, even Denver head coach Mike Malone would catch himself wondering how this season could have played out differently if the team had Jamal Murray (who missed the entire season while recovering from a torn ACL) and Michael Porter Jr. (who played just nine games after undergoing back surgery in December).

“Michael Porter, what he did last year in 10 playoff games: 17 points, 6 rebounds and, more importantly, shooting a high clip from the three-point line (39.7%). Shooting makes up for so many things. Jamal and Michael can do that.”

How good can the Nuggets be next season if everyone is healthy?

“I think it's scary to think about that,” Malone said. “I go back to last season before Jamal's injury in this building (Chase Center); we felt we had a legitimate chance to win a championship last year. Unfortunately, it just wasn't in the cards for us. Jamal suffers the ACL. Earlier this season, Michael Porter Jr. suffers a back [injury]. You're playing without two max players that have both helped us advance out of the first round the last three years. When they're back and they're healthy, I think that's going to make us a deeper, more talented team. I'm excited about that, I really am. I think the future is very, very bright for the Denver Nuggets.”

“The potential is scary,” DeMarcus Cousins added. “We’re down two superstars. We took one of the most dominant teams of this past decade and we battled every night with them. The potential is scary. Obviously, it looks good on paper, but we got to put everything together. We'll see what happens.”

Even though they were missing two of their three leading scorers, Denver finished the season with the NBA’s sixth-best offense (scoring 111.7 points per 100 possessions).

“We know when we're fully healthy, we can be even more dangerous,” Will Barton said.

“We're going to call in the reinforcements,” Aaron Gordon said with a smile. 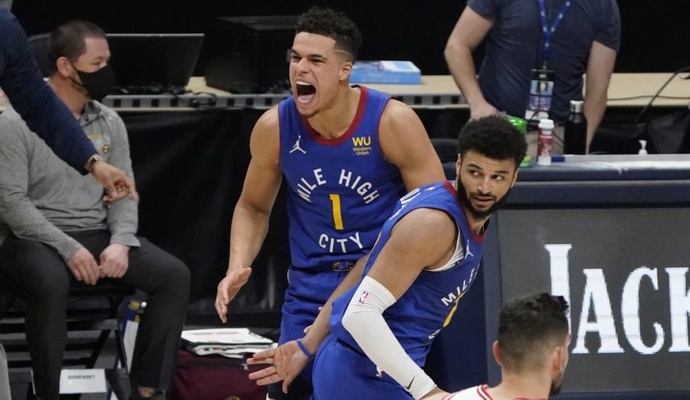 “It should be fun,” Monte Morris added. “A lot of people don't even know how well they're looking individually. It's going to be just like we never left. It was big-time when we was doing it [before] — made some great 3-1 comebacks, some big wins. I'm looking forward to it.”

Fortunately for the Nuggets, most of their core is under contract for the foreseeable future, including Nikola Jokic, Murray, Porter, Gordon, Barton, Morris, Bones Hyland and Zeke Nnaji. Coach Malone isn’t going anywhere either, as Denver’s front office just gave him a multi-year contract extension last month.

While Jokic is entering the final year of his current contract worth $33,616,770, he made it clear that he wants to stay in Denver long-term and plans to sign a supermax extension this offseason (which would pay him $260 million over five years, including $59.1 million in 2027-28).

“I would like it, of course, but it's not something that I'm deciding,” Jokic said. “If [an] offer is on the table, of course I'm going to accept it because I really like the organization, I really like the people who work here. I'm in [a] really good relationship with everybody from owner to equipment manager. I think we have something that we're building. It actually feels really good.”

For Denver, this offseason will mostly be about getting healthy and making moves around the edges.

Markus Howard and Davon Reed will be restricted free agents, assuming Denver extends a $1,576,305 qualifying offer to each player.

The Nuggets have $158,679,553 in guaranteed salaries committed for next season, and they are already $9.7 million over the projected luxury tax, per HoopsHype's Yossi Gozlan. Denver’s ownership has historically avoided paying the luxury tax, but that will change next season as the team tries to make its first NBA Finals run in franchise history.

After the Nuggets were eliminated, the 31-year-old admitted that he isn't sure whether he’ll be back in Denver.

“I honestly don't know what the future holds,” Cousins said. “A lot in this short time has transpired. I'm still trying to get over the fact that G.P. (Gary Payton II) hit that big shot, right? I'm extremely grateful for this opportunity. I'm happy to be a part of this group. I'm happy with the opportunity that was given to me from Mike, [Nuggets president] Tim [Connelly], [Nuggets general manager Calvin] Booth. To answer that question, I can't right now. I don't know what's future holds.”

With that said, Cousins proved that he still has a lot to offer a team, and he should receive significantly more interest during this year’s free-agency period.

“I belong here; I belong in this league,” Cousins said. “I was given the opportunity. I'm thankful for Mike Malone. I spoke with him before. A lot of doors closed for me. Mike looked out, gave me an opportunity. I just tried to take the best advantage of it as I could. That's what I did.”

“I gave him a big hug in the locker room, and I gave him a shout-out in front of his teammates,” Malone said. “He was a guy hanging out at home in Las Vegas after being released by Milwaukee. He goes out in an elimination game and puts up 19 points in 15 minutes. Nikola is in foul trouble, we need somebody to steady the ship; DeMarcus did that. The biggest thing is I'm just really, really happy for DeMarcus Cousins, and I'm so proud of him for staying with it. He had an impactful run with the Denver Nuggets. We'll figure out the offseason in the coming weeks as me, him and [Nuggets governor] Josh [Kroenke] sit down and talk.”

Several fellow Nuggets players vouched for Cousins and stressed that they want him back.

“Anytime you have a guy like that, you always want him back,” Barton said. “Like I say, he's still DeMarcus Cousins — a guy who, when he's healthy, is a very good player. Those are not my decisions; I'm not in management. Obviously, if I have a voice in the fight, I definitely would love to have him back. He was big for us on and off the court, [a] presence in the locker room. We'll see what happens.”

“Signing Boogie, man... I love him to death,” Morris said. “A guy that would pick up 19 points in a do-or-die elimination game just shows how much heart he has, how much love he has for the game. I'm definitely proud of him... He's a great guy. He has a great family, great kids, an amazing wife. I look at things bigger than just ball. He's a guy that's been through a lot on and off the court, experience-wise. He can help anybody. It's a lot that he's seen. Having that around, I think, is big.”

In addition to re-signing their own role players, the Nuggets will also have the taxpayer mid-level exception (worth $6,392,000) to attract talent. Last offseason, Patty Mills (Brooklyn Nets), Rudy Gay (Utah Jazz), George Hill (Milwaukee Bucks) and Justise Winslow (Memphis Grizzlies) are some examples of players who were signed using the taxpayer mid-level.

Also, the Nuggets have the No. 21 overall pick in the 2022 NBA Draft, so they can either draft a prospect or trade the selection for more of a win-now piece. Considering their cap situation, it may make sense to keep the pick and select a rookie who can be a relatively cheap contributor.

In BasketballNews.com's latest 2022 NBA Mock Draft, Denver is projected to pick Baylor's Kendall Brown — a 6-foot-8 wing who's known for his athleticism, motor and defense.

Denver’s front office hasn’t been afraid to pull the trigger on trades in recent years — including the trade-deadline acquisition of Gordon last season. However, the Nuggets’ continuity is one of their biggest advantages, so don’t expect many significant changes. Once Murray and Porter are back to 100%, they will basically count as Denver’s big offseason acquisitions.

If Gordon can take the next step in his development, that would be huge for the Nuggets as well. Following the Game 5 loss, the 26-year-old told reporters that his focus this offseason will be  “working smarter” and “becoming more of a student of the game.”

“I'm playing with Jok, who is one of the smartest basketball players in the world, so I gotta raise my level of IQ to help him, to help everyone, to help the coaching staff,” Gordon explained. “I've relied on my talent for so long — just natural talent, not enough on the cerebral part of the game. So I think now is the time to switch.

“[I’ll be] studying film. Just study, study, study — everybody that's in the league, every game, every set, just leave no stone unturned. I feel like it will slow the game down even more for me and really allow my natural talent to excel. Obviously, I'm going to continue to work on the jumper and just rounding out my game. That's part of it. But the cerebral part, being a student of the game, that's my main focus for this offseason… That's the way that I'm going to help improve this team.”

At the end of the day, the sky's the limit for the Nuggets. If Jokic continues playing at an MVP level, Murray and Porter can return to form and Gordon makes strides, another deep postseason run is certainly a realistic possibility.