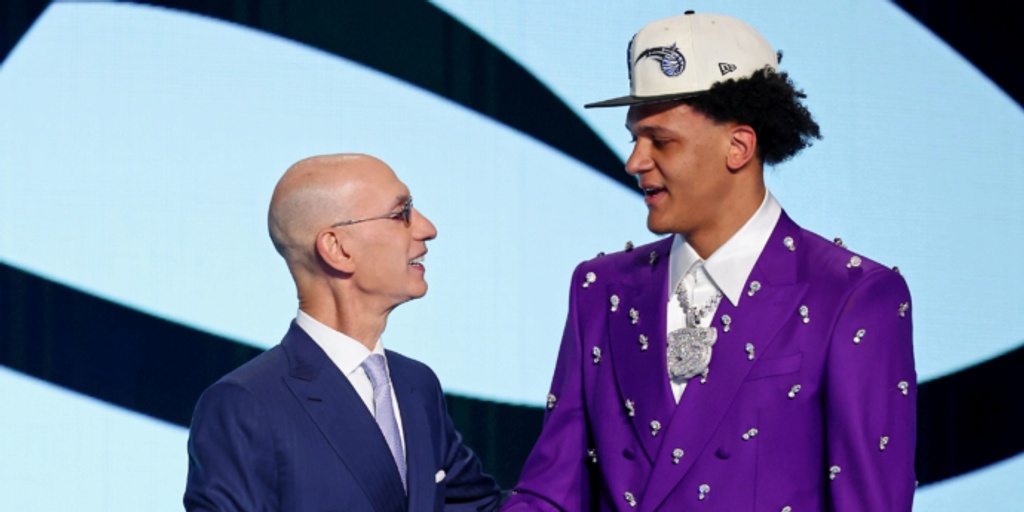 Another NBA Draft has come and gone, and the 2022 version once again lived up to the spectacle.

Fans' heads were spinning throughout the day, as news outlets and sportsbooks took opposite stances on who would be the No. 1 pick. In the end, the Orlando Magic pulled off a stunner by choosing Paolo Banchero.

The surprises didn't end there, as the Detroit Pistons used a three-team trade to snag Jalen Duren at No. 13, and the Oklahoma City Thunder added a second lottery pick to add Ousmane Dieng and Jalen Williams with back-to-back selections.

Matt Babcock is here for one last Q&A to finish off the draft cycle. Here were his thoughts on the night:

The Orlando Magic seemed to shock everyone by taking Paolo Banchero No. 1. How did they pull off such an elaborate smokescreen?

Right after the lottery, while I was at the NBA Draft Combine, I was told that the Orlando Magic felt Paolo Banchero was the safe pick for them. However, I didn't take it too seriously and didn't read into it much. Well, in hindsight, that was a mistake. I would've taken Jabari Smith, but I can't argue with the Magic selecting Banchero. The fact is that the Magic had multiple good options with the No. 1 pick. They chose to go with Paolo, and I respect it. He's a big-time prospect, and he will likely be a primary scorer for them. Hats off to Jeff Weltman and John Hammond. They didn't show their cards and didn't care what everyone else thought they should do. Well done.

Now that Orlando made the pick, how do you like Banchero's fit with the Magic?

Paolo Banchero is big, strong, explosive and skilled. There's a lot to like about him. I think he's a good fit with the Magic. I also believe he will be an outstanding and perhaps an All-Star-level player. I'm happy for the Magic and Paolo. I don't know Paolo personally, but I've watched him play many times over the last several years, making me feel like I do know him. So I'm certainly rooting for him.

What do you think of Jabari Smith's fit in Houston after he ended up No. 3?

I had Jabari Smith as the No. 1 rated prospect in the 2022 NBA Draft since November. Houston getting him at No. 3 is such a great pick, in my opinion. I do not know Rafael Stone personally, but I'm impressed — he killed it on draft night. Jabari at No. 3, Tari Eason at No. 17 and TyTy Washington at No. 29. Honestly, I don't know if the Rockets could've done any better.

The public applauded Detroit for its draft, specifically in the lottery. How impressed were you with the Pistons' selections?

I've had Jabari Smith No. 1 since November, but my favorite prospect this past season might have been Purdue's Jaden Ivey. He's athletic and dynamic, and might have more upside than anyone else in the 2022 NBA Draft. So the fact that the Pistons were able to get him at No. 5 feels like a crime. And then for them also being able to add Jalen Duren at No. 13, who's a young big with a boatload of talent and upside, too — it was just an excellent draft for them. The Pistons' fan base should be very excited!

Which teams surprised you most with the trades they made (or did not make)?

I was surprised that Memphis gave up so much to move up to No. 19 to select Jake LaRavia. I'm certainly a fan of Jake's, and his agent for that matter, Aaron Reilly — a really good guy. However, giving up multiple draft picks did feel like a lot to me.

I was also surprised by the Knicks' draft. I understand and appreciate the value of financial flexibility and draft assets. However, I expected them to add a player through the draft, whether using their pick or moving up in the draft via trade. Time will tell if Leon Rose's move was a smart one or not. Regardless, the pressure is on regarding these future draft picks.

Jaden Hardy was the last green room invitee to be selected. Did that surprise you, and do you like Dallas trading to acquire him?

This past year didn't unfold like I'm sure Jaden Hardy had hoped it would, but I think going to Dallas is an excellent opportunity for him.

Mavericks rookie guard Jaden Hardy spoke with the media today and I asked him how to describe himself as a player and the thing he wants to improve on most; really good answers here #MFFL pic.twitter.com/7nhW9NfffT

I think he has a chance to become an outstanding player in the NBA if he continues to develop. He is a natural scorer with great range and explosiveness. So let's give him some time.

Which other players surprised you with how far they fell in the draft order?

I was surprised TyTy Washington fell to No. 29. I understand the league is going towards a more positionless game; however, I believe TyTy is the real deal. I wouldn't be surprised if he made many teams regret not selecting him. I'm also surprised Kendall Brown fell so far. There are some legitimate concerns with his lack of offensive creation abilities, but his motor and athleticism are legit.

Which players drafted in the second round do you think could earn a rotation spot in their rookie season?

I think Kennedy Chandler will carve out a role with the Memphis Grizzlies as Ja Morant's backup point guard. Also, I'm interested to see if they try to play Kennedy and Ja together. If so, that will be quite the speedy duo and potentially a nightmare to contain.

Who are you viewing as "steals of the draft" from Thursday?

I'm going to pick two: TyTy Washington and Max Christie. I think TyTy has a better opportunity of making an impact right away and proving me right quicker. However, I believe that Max Christie can become a good NBA player within a couple of years.

Is there any report or move you expected to happen during the draft that never transpired?

I was hoping the Knicks moved up to get Jaden Ivey, as rumored. That kid seems to be built for the bright lights. But luckily for the Pistons, they got him at No. 5. I'm looking forward to watching how he develops there. I think he's going to become an exciting player to watch!

Who do you see as the top undrafted free agents to monitor?

Jean Montero. He surprisingly went undrafted and then signed an Exhibit 10 with the Knicks. He's a talented player and was once a highly-touted prospect. I still think he has a shot.

Now that the NBA Draft is over, what's next in the process for scouts like yourself?