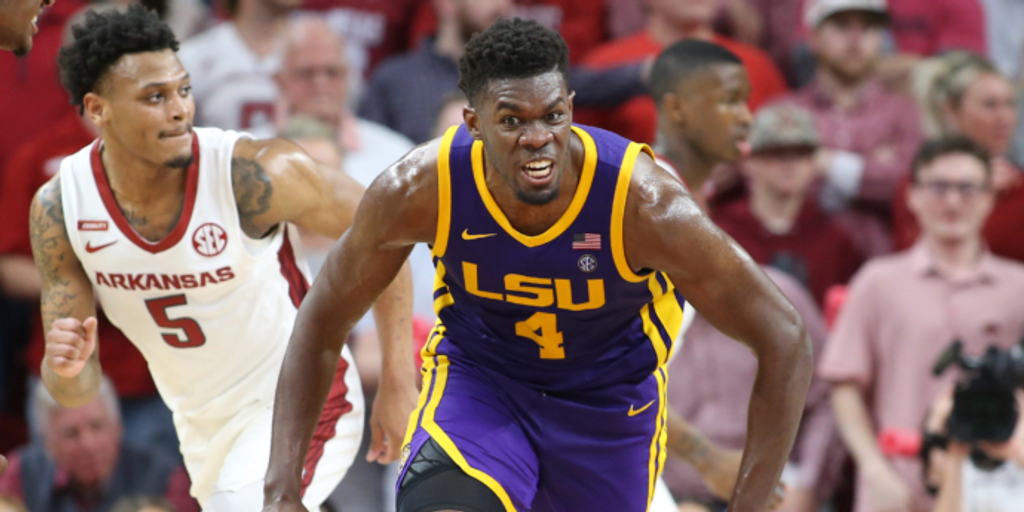 With the 2022 NBA Draft less than a month away, BasketballNews.com will have you covered from top to bottom. The NBA Draft Combine in Chicago began the pre-draft process for a number of hopeful prospects as they try to break into the league.

I had the opportunity to catch up with Louisiana State wing Darius Days, who averaged 13.7 points, 7.8 rebounds and 1.5 steals per game for the Tigers this past season. We discussed his path to IMG Academy, his role on an NBA floor and his week at the Combine.

Prior to your time in LSU, you had deep Florida roots. Could you start off with giving us an idea of what your childhood was like growing up there?

Darius Days: "Honestly it was just really hot, like anyone would think about Florida. I’m the youngest son of three boys. I lived with my mother and father; we’re from the rural area of Raleigh, Florida, probably the best place in Florida. There isn’t much to the area where I’m from, nothing too much beyond trees and nature."

When did you first start playing basketball, and when did you realize you would have a serious future in the game?

Days: "I played youth leagues here and there growing up, but I don’t think I started taking it super seriously until around eighth or ninth grade. I didn’t really think I could be really, really good until probably about 10th grade. That’s when I thought, 'Oh I can really do something with this.' Being in the gym constantly and playing for more and more prestigious teams on the grassroots circuit and traveling around the country is when I thought, 'I can take this to the next level.'"

You left Gainesville and moved to Bradenton to play at IMG Academy, one of the premier programs in the country. How was that transition for you? And what prompted you to make that decision to transfer?

Days: "I felt like there was a certain ceiling that you hit playing at that level. I felt like IMG, with their national schedule, would definitely help me get ready for college. The regimen helped too — I would eat breakfast in the morning and then go right to practice, then to the weight room and then class. That part really helped me get ready for the college life in general."

How do you feel the transfer to IMG helped your preparation for the next level?

Days: "On the floor, I think it helped to play with other high level players. That team had me, Jah’Mius Ramsey (Texas Tech), Josh Green (Arizona), Silvio De Sousa (Kansas/Chattanooga), Chol Marial (Maryland), etc. So being able to compete with those guys and hold my own helped me get ready for the college level."

You decided to play for coach Will Wade and LSU. What was it about the program that enticed you to play there?

Days: "Baton Rouge is similar to Gainesville as a college town. I fell in love with the campus, and I fell in love with the people when I went on my official visit in October of 2017. They were playing Auburn (in a football game where LSU upset No. 10 Auburn, 27-23). The game was insane, going there, sitting in the box; seeing all the basketball players in the student section cheering the football team on was an experience like no other. I also wanted to play early as a freshman, and I think that LSU gave me a better opportunity to do that than the other schools who were recruiting me."

For those who haven’t seen you play, how would you describe your game?

Days: "I’m someone who will give 110% the whole game, you know, play hard. I like to rebound out of area, shoot the three-ball, and I like to mix it up with the trees and bang down low. I think I’m a great team player, leading by example, helping get people in the right spots and communicate on defense, I’m very vocal."

What did you focus on the most during your time in Baton Rouge in terms of development? What are one or two skills that you would like to focus on and improve on your game moving forward?

Days: "Early on, I was an energy guy who would come off the bench, give that spark and shoot threes. My sophomore year, it kind of took a turn. I began to start more, but still brought that same energy and shot-making. My junior year, I think I began to focus on being more efficient, playing with guys like Cam Thomas, Javonte Smart and Trendon Watford. I became the most efficient I think I've been in my life. My senior year, I had the ball in my hands a lot more; I got to the rim a lot more and got to show my versatility more on both ends. Defensively, I switched a bunch and switched 1-through-5. Going to the NBA, I want to get to the rim a lot easier, be more consistent with my jump shot and bring as much as I can to the table."

What role do you feel you can fulfill for an NBA team early on in your career?

Days: "I think I can definitely be a floor-spacer; I think thats what a lot of teams like about me. I bring versatility on the defensive end, guarding 3-through-5. I’m going to be able to shoot the three-ball at a consistent rate. I bring 110% every night; I play hard for my guys, sacrificing my body for the team. I do what I’m supposed to do, on and off the court."

What is one short-term and one long-term goal that you have set for yourself?

Could you take us through your daily routine currently as you prepare for the NBA Draft?

Days: "I wake up in the morning, get a healthy breakfast. From there, I go get a workout, I’ll go the track, run some stadiums, work on my conditioning. Then, I go back to the gym and shoot and work on ball-handling. In the afternoon it’s more off-the-dribble, work, finishing, touch shots. Things like that."

Talk to me about how your week was in Chicago at the Combine.

Days: "I feel like I got to show people how much I can play. In the G League Combine (Elite Camp), I played mostly the 4 and sometimes a small-ball 5. I can play whatever my team needs me to play. When I got the call up to the NBA Combine I played primarily the 3. I feel like I got to show that I could play multiple positions. I feel like in the NBA I’ll be playing mostly the 4, so I’m very it excited. It was a fun opportunity for me. I showcased a lot of things, and it helped build my confidence for my workouts and the NBA Draft."

Days: "I’d say Draymond Green and P.J. Tucker. Draymond because I’m a 6-foot-7 guy who can shoot the three-ball and go out there and guard 1-through-5. He does all the little things to help his team win. I feel like without Draymond a lot of things wouldn’t move as smoothly. I think to live up to that comparison there’s some things I have to work on; definitely getting more comfortable bringing the ball up and making split-second decisions. P.J. Tucker, it’s almost the same thing — shooting and spacing the floor, he’s also very solid on the defensive end as well. I like the way they carry themselves and the heart that they play with."

Let's pretend that you've just entered an elevator with a general manager of a team that's considering selecting you. What is your elevator pitch as to why you're their guy?

Days: "I’m telling them that I’m a hard worker, whatever you need me to do I’m going to make sure I get it done. Rain, sleet or snow I’m going to be at the gym."