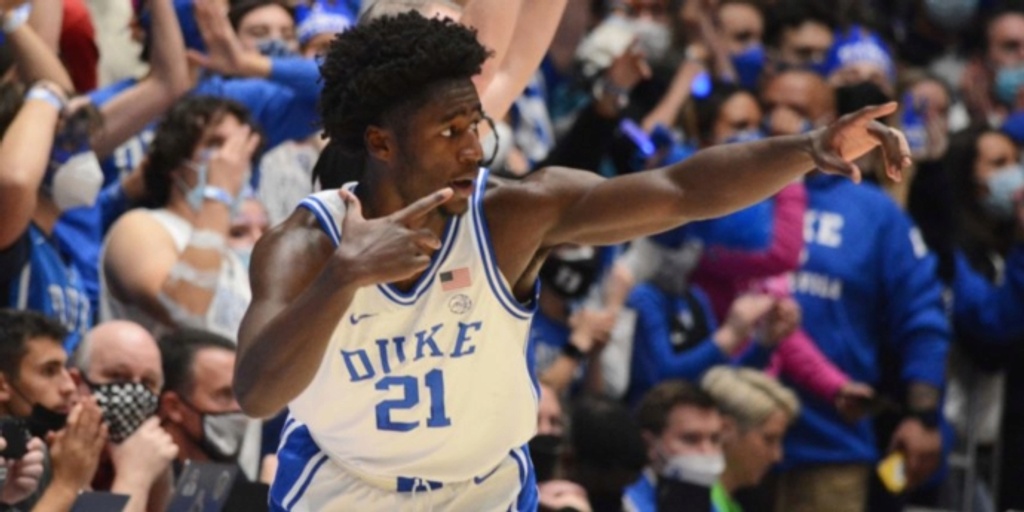 In recent NBA Draft history, there's been a common theme with potential lottery picks — standing about 6-foot-6 with a near-7-foot wingspan, having an “NBA-ready” frame and being athletically gifted.

Those players often have all the natural gifts but, to some extent, lack the ball skills or jump shot to make a high-level impact on the offensive end early in their NBA careers. Nevertheless, the physical tools are usually too intriguing to pass up, which results in their eventual lottery selection.

The early careers of those players see their teams utilize them as athletic defenders who are deployed as cutters and drivers on offense, while their jump shot flashes potential, and offseasons are spent tightening their handle and tweaking their shot form. Sound familiar?

We’ve seen the successes of Jaylen Brown, the struggles of Stanley Johnson and the work-in-progress of Isaac Okoro. While his physical measurements may fit the previously stated description, Adrian Griffin Jr. — a.k.a. AJ — is creating his own narrative.

The Duke Blue Devils' freshman is averaging 10.4 points and 3.8 rebounds on 50.2% from the field and 46.7% (!) from three going into the NCAA Tournament. Griffin was a five-star recruit coming out of high school, but missed most of his junior and senior seasons with injury. He also began his first year at Duke with a knee sprain, which set him back at the start of the season.

After a limited first four games of the season, Griffin played his first 20-plus-minute contest against Lafayette that prompted his rise back up draft boards, finishing with 18 points on 70.0% from the field and 4 of 6 from beyond the arc. Although the following three games resulted in limited minutes for AJ, the South Carolina State matchup once again reminded scouts of how high-level a draft prospect he is; Griffin had a 19-point, 7-for-8 showing.

From then on, Griffin’s minutes increased, as it seemed he was getting stronger and more comfortable on the court post-injury. The freshman had notable road performances at Wake Forest (22 points, 8 of 11 FG), Louisville (22 points, 8 of 11 FG, 5 of 5 from three) and North Carolina (season-high 27 points, 11 of 17 FG) that secured Duke major wins in the ACC.

What’s so interesting about Griffin as a prospect is the fact that his athleticism was his calling card in high school, yet he hasn’t been reliant on it to be successful in college. He’s found success with his impressive shooting outings. When watching him shoot the ball, his wide base is a bit unorthodox, but the top of his release is fluid, and you can’t argue with the results. If Griffin faces a hard close out, he utilizes side steps, step backs and various dribble combinations to freeze his defender or create enough space to get off a smooth release.

When run off the three-point line, Griffin has flashed an ability to get into the mid-range and convert. He finishes around the basket well because of his strength, but may leave something to be desired considering the athletic pedigree he had in high school. This could be a result of his injury history but, a 58.0% field goal percentage around the rim (per InStat) could provide confidence that, as he gets stronger, he’ll continue to improve his ability to finish against NBA defenders.

At this point, Griffin has a strong foundation as a prospect that profiles as a powerful and versatile wing with the potential to comfortably score the ball on all three levels. He has a solid handle that continues to improve, and upside as a long-armed defender who projects to guard 2-through-4.

It’s no surprise that NBA scouts never hesitated after Griffin’s slow start, even if injuries will remain a question mark. BasketballNews.com Senior NBA Draft Analyst Matt Babcock never lost sight of Griffin’s major upside, and provided his thoughts on the Blue Devils swingman as we enter the NCAA Tournament:

I saw Duke on opening night at Madison Square Garden when they played Kentucky. Griffin scored 2 points in 11 minutes. Then I saw Duke again a few weeks later in Las Vegas when they played Gonzaga. He didn't even score in that game and only played 6 minutes. To say that he started the season off slow would be an understatement. Despite Griffin's lack of production or playing time, I was able to watch him work out before both of those games. The combination of his physical profile and shooting ability was undeniable. I knew it was just a matter of time before it clicked for Griffin, but I was beginning to question if he would be able to get things rolling in time to enter the 2022 NBA Draft. But then, it clicked, and although he's been a little up-and-down.

He's put together some huge games where he has shot the ball incredibly well. He also can create his own shot as he has a sweet step-back move. Although Griffin's freshman season has been a roller coaster, he has established himself as a likely lottery pick in this upcoming NBA Draft. We currently have him ranked No. 7 on the BasketballNews.com 2022 NBA Draft Big Board.

March Madness is a time where the best players can shine the brightest, and there have been times this season where Griffin has been the most impressive player on the floor for the very talented Blue Devils. If Duke is going to make a deep run in this year’s tournament, the team's going to continue to need Griffin’s floor-spacing to shoot them into games — or to put games out of reach.

With the added context that this will be Mike Krzyzewski's final March Madness, there will be a heightened pressure on the Blue Devils to produce a strong run for Coach K. This tournament is also going to be important for Griffin to solidify his draft positioning, as he did end the ACC Tournament championship with his worst volume-shooting performance of the season in a loss to Virginia Tech (10 points, 1 of 8 from three). Duke’s potential matchup against Michigan State in the second round could be a game to watch, as Griffin may line up against the Spartans’ rangy wings in Gabe Brown and fellow freshman Max Christie.

Griffin’s quiet start to the year hasn’t matched how important he became to Duke this year.

But on the game's biggest stage, Griffin is preparing for his grand crescendo.

AJ Griffin is currently ranked No. 7 on BasketballNews.com's 2022 NBA Draft Big Board.