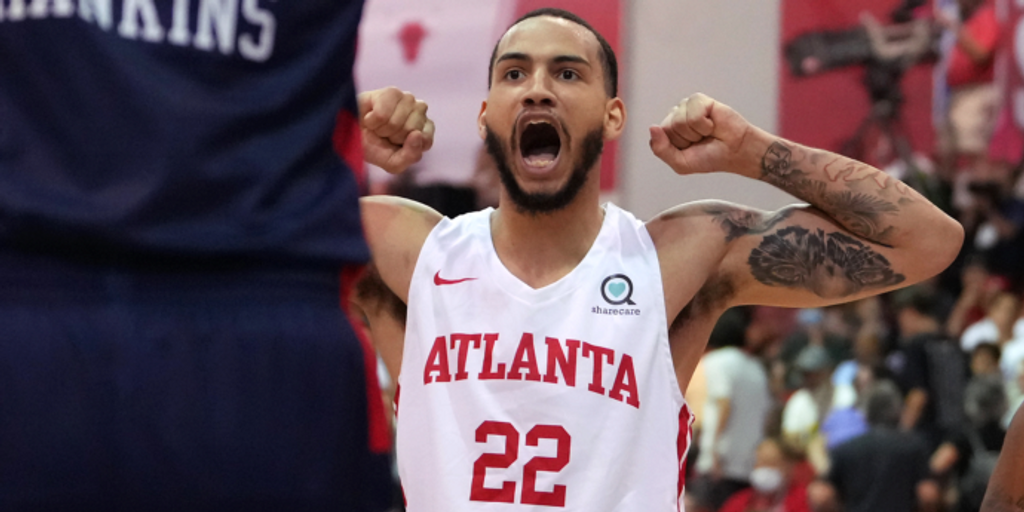 Different players deserve different standards of "outstanding" success at NBA Summer League based on their experiences in professional basketball.

For rookies, the first summer is about showcasing your strengths and flashing tools that we may not have seen in their respective prior systems. The bar gets raised for sophomores and veterans, particularly those who have already unveiled their talents in an NBA regular season.

In my opinion, simply repeating what we know about a player's game doesn't signal they're ready for the next step up at the NBA level. I want to see a leap somewhere. Maybe that's a strength become impossibly dominant within the confines of Las Vegas, or maybe it's a new skill showing up that we haven't seen in past seasons.

The point is that it takes more for a guy like Cam Thomas to wow me. Thomas dropped 29 points on Tuesday, going 9-for-19 from the floor and 11-for-13 from the free-throw line. His effort was very similar to his inefficient, free-throw-driven outing on Sunday. Thomas showcasing his knack for getting to the line and scoring in bunches is great, but for a second-year, first-round pick, I want to see something else that I can visualize him carrying to the Nets' full roster.

Thomas did not make my Studs list today even though he logged a strong game. Here are the guys who did:

The Bulls opened Tuesday's slate against the Raptors, and Jones delivered an effortless performance. Everything felt anticipatory, but not forced, with how he played on offense. Jones capitalized on the space he found, pinning defenders on his hip twice to convert floaters. He had David Johnson skating on the in the above play before finishing at the rim, and later even beat a recover attempt from Christian Koloko.

I'm giving Jones a double-clip because this pass was so sweet. He knows Jeff Dowtin has to try and cover two passing lanes at once, so as Jones drives, he looks Dowtin off toward the wing shooter and then dimes a no-look pass to Malcolm Hill for three. Just gorgeous.

Santi Aldama masterclass in Vegas tonight for the @memgrizz 😤

Aldama needs chill out before I dangerously overreact to his last two Summer League outings. The second-year forward frequently shared the court with Xavier Tillman, who typically drew the opposing center as a matchup. This left Aldama to feast on smaller players. He's much stronger than most people realized, and easily sealed off defenders for interior buckets. We also saw several instances of Aldama as a cutter. His long-range shot finally started to fall as well.

Then on defense, we saw Aldama work as a drop defender and help on ice and trap possessions. He sent back three separate driving attempts from three guards and wings. When Aldama puts things all together, he's a pretty terrifying two-way presence. We'll see if it translates past Summer League.

Other Grizzlies might have better box scores, but I was floored by Ziaire Williams as a playmaker as I watched this game in person. We didn't get to see much of Williams on the ball during his rookie season, for obvious reasons. But he was the lead faciliator for most of the Grizzlies' dominant win. These two dimes stuck out, and Williams threw several other impressive passes that did not turn into assists.

Then as a scorer, Williams methodically sought out his spot. He didn't shy away from contact and also hit a pair of pull-up threes. This is what Summer League is all about: giving players the freedom to experiment and seeing new aspects of their games flourish.

Tyrese Martin hit the "too small" after the finish 🤣

Martin has 21 to lead all scorers 🔥 pic.twitter.com/Z0TBq4Yk5M

Man, Martin is such a physical, tough player. He consistently powered through contact and shot contests from a tough Miami Heat defense and finished around the basket. Martin doesn't have the flashiest handles or quickest first step, but he can change speeds when he wants to and use his functional strength to ward off defenders. Martin was picked No. 51 overall by Atlanta in this year's draft, and they should feel good about the choice after this performance.

Put it up and Mfiondu Kabengele will go get it! pic.twitter.com/1J3PXvoD7Q

Kabengele has been a miniature revelation as a massive interior presence so far. On Tuesday, he battled inside against James Wiseman and owned the glass. Kabengele starred as a lob threat and roller for Boston and displayed an easy chemistry with second-round pick JD Davison.

He also picked up four assists, and while they weren't highlight-reel passes, Kabengele clearly has a solid foundation as a connector within an offense. He's a former first-round pick from 2019, and I think Kabengele has shown enough in Summer League to at least warrant a reserve roster spot with the Celtics.

James Wiseman nice find to Jonathan Kuminga who jump stops and dunks it for the Warriors. pic.twitter.com/pc0aZzyuiX

This hasn't been the easiest Summer League stint for Kuminga since Golden State has thrust more on-ball responsibilities onto him. He struggled again to open Tuesday's matchup against the Celtics but started to find a rhythm as the game wore on. On successful scores, Kuminga could almost probe into the middle of the paint as defenders backed into the restricted area to contain his drives. Then Kuminga could face up, post up or just shoot a short jumper.

Of course, he threw down a couple of monster dunks off of short rolls or cuts, like the one above. Kuminga is still best used off the ball, but I do think we saw noteworthy progress from the No. 7 pick as a self-creator.

There's already so much noise around Wiseman and his career to date, so I hope people aren't seriously weighing his first games back — which also happen to be inconsequential Summer League games. Wiseman did not play extremely well, but he was not horrendous, and did block three shots while serving as a rim deterrent on several possessions. So while I am critiquing other areas, there's no need to pile onto this guy.

Wiseman did not pressure Boston on offense. He barely received chances to create, though it should be noted this Warriors roster seriously lacks quality passers. When he did, it was often a quick face-up jumper. He weirdly short-rimmed two easy baseline attempts, and his three-point shots were well off. This is not an ideal setting for Wiseman to make an impression, and unfortunately, he hasn't yet.

Not to be all annoying about Summer League rotations, but I'm moderately surprised Christie is starting over Mason Jones. Jones has rocked off the bench and probably needs the mintues for the sake of his next career move. Christie is entrenched with the Lakers and has not played nearly as well.

The second-round rookie shot 1-for-6 inside the arc. He failed to create separation on any of his driving attempts, and tried this runner that was not falling. Christie's offensive game is going to be a development project for the Lakers, and he seems pretty far away right now.

Since Hardy scored 28 points in his Summer League debut, the second-round pick has gone 4-for-15 in back-to-back contests. He reached his pull-up spots with relative ease, but just didn't have the touch against the Suns. Hardy had a more difficult time creating for himself at the rim; Phoenix swarmed him, and he was not a threat to kick out. The pre-draft concerns about Hardy's streaky scoring, and how he counterbalances that on offense, felt apparent aftet this game.

Preston was one of my favorite players coming out of the 2021 NBA Draft. His processing as a facilitator, court vision and two-way effort still make him someone on my watch list from the second round. But Preston will have to overcome some limited athletic tools to be successful, particularly after missing all of last season due to foot surgery. He struggles to create separation for himself. This means he can't open up windows to score or collapse defenses and manifest passing lanes. It puts a ton of pressure on Preston as a shotmaker and passer.