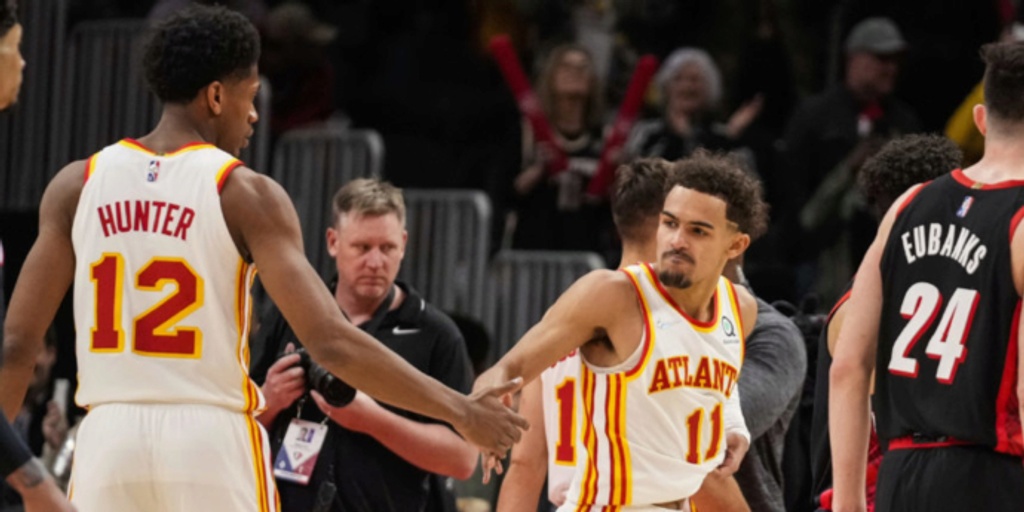 Trae Young scored 21 of his 46 points in the third period and the Atlanta Hawks recovered from a 15-point second-half deficit to beat the Portland Trail Blazers 122-113 on Monday night.

Young, who scored 47 points a night earlier in a win over Indiana, added 12 assists against the Blazers.

De’Andre Hunter scored 20 points for Atlanta, including a 3-pointer to put the Hawks ahead 116-111.

Josh Hart led Portland with 31 points. The Blazers began the night 11th in the Western Conference, one spot out of the play-in tournament.

Young scored the next eight points, and 17 of Atlanta’s first 19 in the third period, to lead the Hawks’ rally. Two free throws by Hunter put Atlanta ahead 79-77, its first lead since the opening quarter.

The Hawks led 104-93 early in the fourth before Portland went on a 10-0 run, capped by Brandon Williams’ 3-pointer. Kevin Huerter responded with a 3 for Atlanta.

Trendon Watford had 22 points and Williams added 20 for Portland.

The Blazers snapped a six-game losing streak by beating Washington on Saturday night as Hart scored a career-high 44 points.

“Having to be that scoring option is a new role for Josh,” Blazers coach Chauncey Billups said before Monday night’s game. “We’re asking him to do things he’s not really used to.”

Hart looked comfortable while scoring 25 points in the first half against the Hawks. He finished 4 of 7 from 3-point range.

Young is plenty comfortable against the Blazers. He set a career high with 56 points in Atlanta’s 136-131 loss at Portland on Jan. 3.

Trail Blazers: PG Kris Dunn, who signed a 10-day contract before the game, had two points in 20 minutes. It was Dunn’s first game since he played four games with Atlanta last season. He started in a combined 119 games in three seasons with Chicago. Dunn adds backcourt depth as Anfernee Simons (patellar tendinopathy in his left knee) is expected to miss up to two weeks.

Hawks: F Danilo Gallinari (right Achilles tendon soreness) was held out, leaving the Hawks thin at forward. Gallinari had been the fill-in starter for John Collins (right finger sprain, right foot strain), who missed his second straight game. Coach Nate McMillan said Gallinari has played through the injury “most of the season. ... Sometimes it flares up.” ... Clint Capela had eight points and 16 rebounds.

Hawks: At Charlotte on Wednesday night.