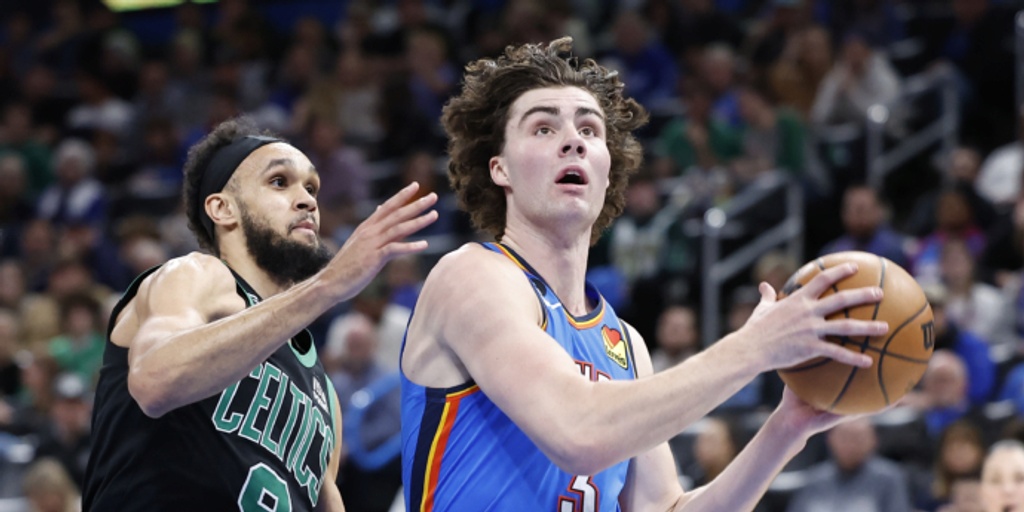 Thunder blow out Celtics 150-117 without Gilgeous-Alexander

OKLAHOMA CITY (AP) — Oklahoma City's top scorer was out, so everybody pitched in to make things work.

Oklahoma City’s Shai Gilgeous-Alexander, who ranks among the league’s leaders with 30.8 points per game, sat out with an illness. Without him, the Thunder set a record for points since the team moved to Oklahoma City from Seattle before the 2008-2009 season. The previous mark was 149 points in 2013.

Lu Dort scored 23 points and Jalen Williams, Tre Mann and Isaiah Joe each added 21 points for the Thunder. They shot 59.2% from the field.

“I just think we’ve got great players and great people," Mann said. “Guys who don’t really care who gets the credit.”

The Thunder hadn't won a game by more than 16 and the Celtics hadn't lost by more than 16 this season. Oklahoma City coach Mark Daigneault said the result came from his team's approach.

“I told them after the game, I want them to realize what got it going, which was we had a great practice yesterday, came into the game with great focus on both ends of the floor, what we had to do, and that’s what allowed us to have fun tonight," he said. "And we can’t lose sight of that.”

Oklahoma City took advantage of the fact that Robert Williams, one of Boston's primary rim protectors, was out managing his injured left knee. The Thunder made 38 of 58 shots inside the 3-point line.

"You have to play with a sense of humility every night knowing your opponent wants to beat you,” Celtics coach Joe Mazzulla said. “We have to match that, and we didn’t. We got outplayed in every aspect of the game.”

A 10-0 run put Oklahoma City ahead 90-63 just over three minutes into the second half, and the game was never close after that. The Thunder scored 48 points in the third quarter — the most ever for an Oklahoma City team in a quarter — and shot 67.9% in the third to lead 122-91 heading into the fourth.

“Late in the second quarter, they sort of put their head down, Boston did, and they got to the line and they were trying to play through us and they were just trying to like jam their way back into the game," Daigneault said. "And we needed to stand in there in order to fend that off. And I thought the guys did a really good job of that.”

Celtics: Mazzulla and G Marcus Smart attended the Oklahoma State-West Virginia game Tuesday in Stillwater and sat together. Smart played college ball for Oklahoma State and Mazzulla played for West Virginia. Oklahoma State won 67-60. ... Smart was called for a technical in the second quarter and ejected in the third for berating an official.

Thunder: Even Oklahoma City’s fans were hitting shots from deep. Johnnie Durossette, a 20-year-old from Muskogee, Oklahoma, made the MidFirst Bank halfcourt shot during a timeout to win $20,000. ... F Aaron Wiggins scored 17 points.

The Celtics had their shootaround at the Oklahoma City facility where Celtics F Blake Griffin's AAU basketball program practices. Griffin is from Oklahoma City and he played college ball at the University of Oklahoma.