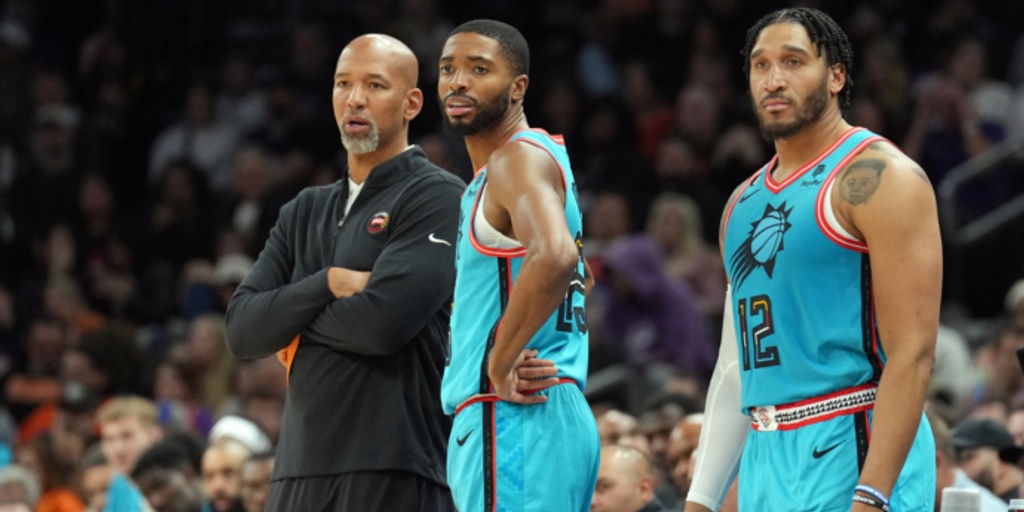 Depleted and fatigued as they get set to wrap up their season-long, six-game road trip Wednesday night in Cleveland, the reeling Phoenix Suns are keeping things in perspective.

It started with a candid conversation between the whole team, coaching staff included, following a listless 102-83 loss to the Knicks on Monday afternoon in New York  — Phoenix’s third straight defeat and sixth in seven contests. However, the topic of discussion shifted Tuesday on the heels of the tragic cardiac arrest that Buffalo Bills safety Damar Hamlin suffered mid-game in Cincinnati after Phoenix's contest ended.

“We saw last night how important our brotherhood in sports is, watching the young man [Damar Hamlin] go down on the field last night. We talked about that today,”  Suns head coach Monty Williams told Basketball News and the Arizona Republic at an afternoon practice on Tuesday.

“Yeah, we want to be really good as a team, but let's not forget people are going through a lot more worse than us. We lost a few games, you know? This young man is fighting for his life and his family's going through a tough time... I think it's just another situation where a guy was doing the very best to help his team in one of the biggest NFL games of the year, and then that happened and the whole scene changed from 'sport' to 'life.' And that always has to be at the forefront. With that in mind, we have to be able to compartmentalize as best we can and do the jobs that we're paid to do.”

Suns forward Mikal Bridges echoed Williams’ sentiments about the trivial nature of the game versus the health of a human being.

“It's life. It's gonna get bumpy on the road. Luckily for us, our 'bumpy on the road' is just losing games. [There are] a lot of other things that's worse,” Bridges told Basketball News and the Arizona Republic. “We've just gotta stay with it, just keep getting better and just get through it. You know, it ain't gonna rain forever, but if you just soak it in, just sit out there, it will. So you've just gotta keep fighting through it, keep going and just get through it.”

On the court, away from the Footprint Center since Christmas Day, Phoenix has had its troubles with the injury bug and finding a rhythm on both ends. Devin Booker went down four minutes into a trip that began on a holiday in Denver and will conclude across the country in Cleveland just days into the New Year.

Nobody’s body feels perfect; Bridges had a bag of ice on his right knee and Chris Paul had a wrap on his left calf, while Cam Payne just reentered the fold last game after missing half of December with a foot injury and Landry Shamet even missed some time with a sore Achilles following a 31-point outburst in relief of Booker. Cameron Johnson is still on the mend as well, recovering from meniscus surgery, and hasn’t played a game since Nov. 4. (He was getting shots up on Tuesday, so that’s a good sign.)

But the longtime NBA player and coach Williams knows this is what happens over the course of an 82-game NBA season, and in these short-handed times, it’s about finding a way to execute with the Suns players who are available to go.

“I just think you want to see a consistent style of play, no matter who you have on the floor,” Williams responded to Basketball News. “The outcome might not be the same because of the talent, but you can still play the same style. Nobody can take away your effort and your defense, and that's something that is an old adage in the NBA. I'm looking more for a consistent style of play. Sometimes you're not gonna make shots, but you can still play hard, you can still defend.”

Williams said that the Suns were shocked when he told them they actually won the second half against the Knicks. (Phoenix outscored New York 52-48.)

“You always want to finish out a road trip on a winning note, but in order to do that, it has to be a step-by-step process,” Williams stated. “We have to stack salad as best as we can, and not get deflated if you miss a few shots. I thought that hurt us in the first half. The first half put us in a hole; that can't happen, but more in a hole emotionally.

"I believe we'll be better tomorrow because you have to learn through these moments. Everybody in the league is gonna go through it. You can lose, or you can lose and learn, and I hope we do the latter.”

Bridges kept it simple about his expanded role and how the team can adapt.

“Maybe being a little more aggressive, but I just feel like keep playing the right way, find opportunities to score and then, just playing good ball. Play the right way at all times,” Bridges said.

“I just know you have to be resilient through the ups and downs of a season,” Williams added. “Like, no team in this league is gonna have a full allotment of their players through the season. So you're gonna have those adversities. No team is gonna play a game where they agree with the whistle every game. And I could go through the list of notes. You have to be resilient. We've had a long road trip. We've been on the road for a long time. It's like, look, man, that's life. You could be digging a ditch in a different country. So our guys understand what we have to do, we gotta do it more consistently, but we also understand that basketball is just a game.”

Whether the Suns finish with a victory at Rocket Mortgage FieldHouse or not, they’ll return home for a quick cup of coffee against the Miami Heat and the same Cavs they’ll face Tuesday. Then, another four-game swing on the road will await.

The competition will come fast and furious, and there will be no time to feel sorry for themselves. Williams appreciates the fact that Phoenix is unhappy with its play of late and has taken initiative to ensure things get turned around.

“I mean I think teams have these [meetings] two or three times a year, especially if you have expectations. I applaud the guys for caring enough to talk about it,” Williams said. “I'm not into the 'team meetings' stuff where they go off and do all that. That's just not my thing. If you're gonna have a team meeting, in my opinion, you do it with everybody, [including] coaches, so we can all hear each other talk about stuff.

“And it's not that dramatic. The guys understand that there's things that we have to do at a higher level because we are one, missing guys, and two, playing on the road against good teams. It's not like Hebrew math. You've gotta figure it out. So I applaud the guys for talking and caring, and they care. Our team is filled with a bunch of poor losers. It's one of the reasons I love these guys so much.”