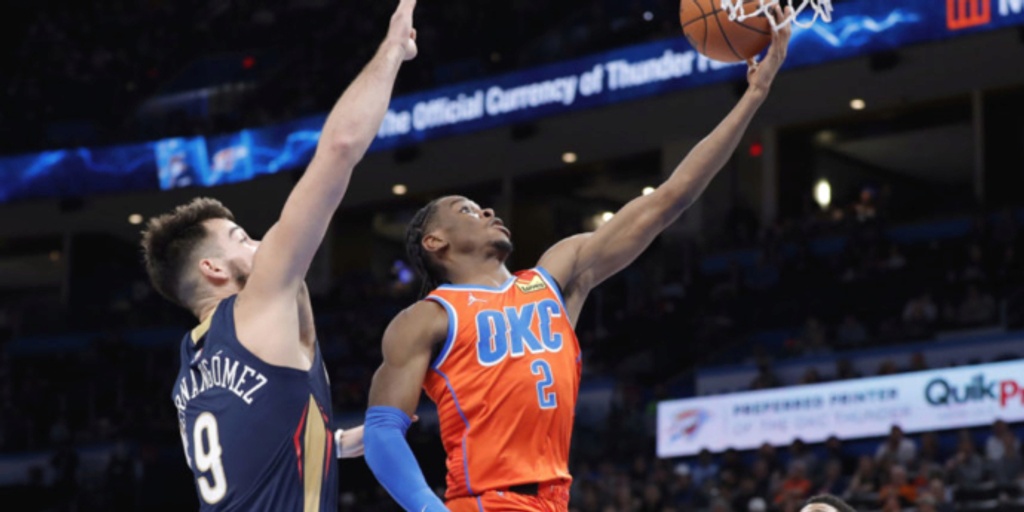 Wiggins, who had never scored in double figures this season, eclipsed his previous season best by halftime when he led the Thunder with 11 points.

Recently inserted into the starting lineup for his defense, the second-round draft pick from Florida said there was nothing magical about his unexpected offensive outburst.

“I just think I did a really good job of trying to find open spots,” Wiggins said. “When I’m on the bench, when I’m not in the game, I watch those guys who are really good at playing off ball. I try to make sure when I’m on the court, I’m doing those little things that can help the team get going. My guys found me in open spots and I was just trying to make plays.”

“We’ve been trying to give him confidence and become an offensive player, but to do it inside the role that he’s in and inside the team, which is a hard balance,” Daigneault said. “This was the cumulative effect of a lot of development and a lot of process and growth for Aaron.”

In his third season with the Thunder, Gilgeous-Alexander passed James Harden on the Thunder's all-time scoring list. He scored eight points down the stretch when Oklahoma City was trying to close out the victory.

“What it really comes down to is me being aggressive whenever I get the opportunity,” said Gilgeous-Alexander. “I saw a few things on how they were playing defense when I was on the bench. I just wanted to come back in and attack those things. But for sure, I want to assert myself.”

Josh Hart had 29 points and 10 rebounds to lead the Pelicans. Garret Temple came off the bench to score 22 points, including 15 in the first half.

The Thunder expanded the lead to 17 early in the second period before cooling off. The Pelicans cut their deficit to 57-49 at intermission. New Orleans scored eight straight early in the third to make it 60-58 before the Thunder countered with a 10-2 run over the next two minutes and went on to lead 89-81 heading into the fourth.

New Orleans outscored the Thunder 11-2 to start the fourth quarter and took a 92-91 lead with 8:10 left on a dunk by Willy Hernangomez. Kenrich Williams hit a 3-pointer at the other end as the Thunder regained the lead and held on the rest of the way.

Thunder: Rooke Tre Mann went through pregame warmups, but was placed in the health and safety protocol midway through the first quarter. He had tested negative Sunday morning, but felt symptoms near tipoff and Thunder doctors elected to put him in the protocol. ... Dort wasted no time extending his streak of consecutive games with a made 3-pointer to 44, hitting his first attempt two minutes into the opening period. His current mark is second in the league to Steph Curry. He missed his next six 3-point attempts and finished 1 of 7.

Pelicans: Center Jonas Valanciunas missed his second straight game with a non-COVID illness. ... Ingram left the game after the first quarter with Achilles soreness. He was scoreless in nine minutes, missing all three of his shots. Temple replaced him in the lineup to start the second half. ... Pelicans had started the four-game win streak in OKC on Devonte Graham’s 61-foot basket at the final buzzer.