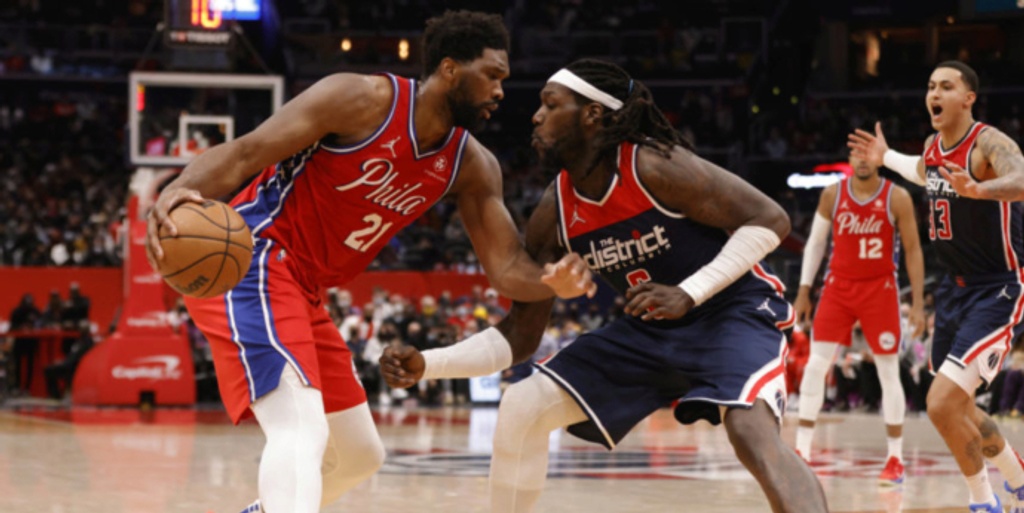 Joel Embiid had 36 points and 13 rebounds and a spat with Montrezl Harrell, Tobias Harris added 23 points and the Philadelphia 76ers beat the Washington Wizards 117-96 on Sunday night.

Philadelphia improved to 17-16 after dropping four of its last five.

Spencer Dinwiddie led Washington with 17 points. The Wizards also are 17-16.

With 3:04 left in the third, Harrell fouled Embiid, and the two exchanged words. Both were assessed technical fouls, and Embiid made the two free throws.

“He flopped,” Embiid said. “I don’t think he made a play on the ball, and we got tangled.”

Thirty seconds later, Harrell pushed Embiid, yelled at him, and was given his second technical and ejected. Harrell, who didn’t immediately leave the court was finally escorted the floor, and left shaking his head while Embiid waved him goodbye.

Harrell was visibly annoyed after the game.

Washington scoring leader Bradley Beal sat out his second game while in the NBA’s health and safety protocols.

Wizards: G Raul Neto joined Beal and F Kentavious Caldwell-Pope are in health and safety protocols. … F Rui Hachimura, who has yet to play this season, dressed for the second straight game, but didn’t play. … G Jordan Schakel, signed to a 10-day contract on Tuesday, made his NBA debut. ... G Joel Ayayi scored his first NBA points.

Harrell won’t apologize for his actions on the court.

Philadelphia coach Doc Rivers said that players who join teams and can acclimate quickly are invaluable.

“That’s sports right now,” he said. “Be prepared. Be ready.

“I always think it’s the other guys, the guys who are there who aren’t sick, who can play, the more prepared they are, the easier they make it for the newcomers.”

76ers: At Toronto on Tuesday night.

Wizards: At Miami on Wednesday night.