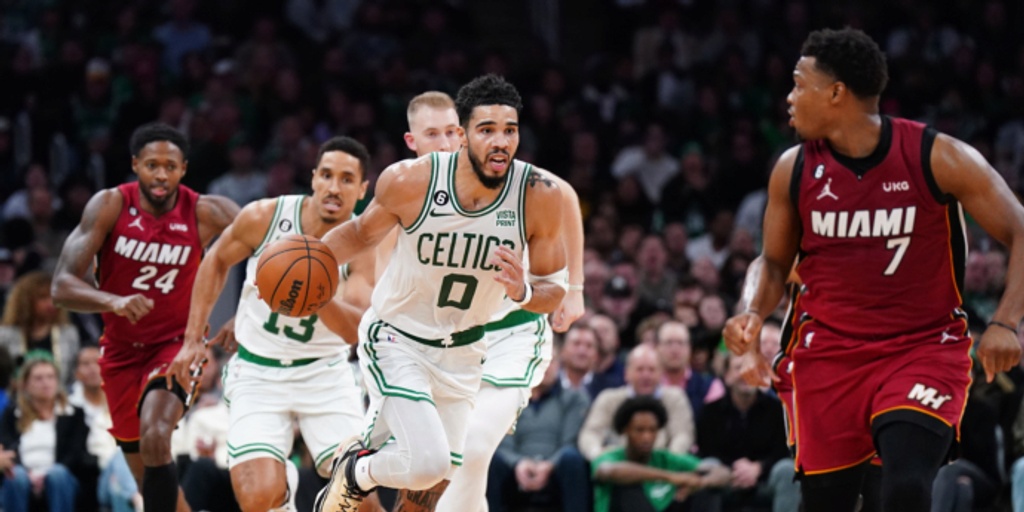 BOSTON (AP) — Jayson Tatum had eight 3-pointers and scored a season-high 49 points, and the Boston Celtics held off the hot-shooting Miami Heat for a 134-121 victory on Wednesday night.

It was the All-Star’s third 40-point game this season as he continues to pace the league’s top-rated offense and make an early case for MVP consideration in his sixth NBA season.

Tatum scored the Celtics’ first six points and had 41 points after three quarters, using his entire offensive repertoire, scoring from the outside and slashing to the basket. He finished 15 of 25 from the field, 8 of 12 from 3-point range and 11 of 12 from the line. He also grabbed 11 rebounds.

Jaylen Brown finished with 26 points following a one-game absence due to neck stiffness. Malcolm Brogdon added 21 points, connecting on five of Boston’s 22 3-pointers in the game.

Max Strus finished with 23 points and five 3-pointers for the Heat. Bam Adebayo also added 23 points before being ejected in the closing seconds following a pair of technical fouls.

The Heat were again without star Jimmy Butler, sidelined for a seventh straight game with a sore right knee.

After falling into an early hole and trailing 68-60 at the half, Miami kept pace thanks, in part, to five 3-pointers and 19 points in the third quarter from Strus.

Boston took a 102-96 lead into the fourth, but Miami didn’t let up and closed within 118-115 on a layup by Highsmith with just over five minutes to play.

The Celtics hit their first five shots of the game, jumping out to 14-2 advantage. It grew as high as 20-6 before Miami responded with a 21-5 run to take their first lead of the night, 27-25.

Celtics big man Robert Williams in getting close to making his season debut.

Williams is working his way back into playing shape and could be available to play “soon,” interim coach Joe Mazzulla said before the game.

“Progression has been just continuing to get him stronger, which he’s doing a great job at,” Mazzulla said. “Then, mentally, making sure he feels comfortable.”

Williams has yet to play this season after undergoing surgery in late September on the left knee that caused him to miss time during Boston’s NBA Finals run last season.

Heat: C Dewayne Dedmon sat with plantar fasciitis in his left foot. … Udonis Haslem saw action for just the third time this season. The 42-year-old logged nine-plus minutes going 0 for 2 from the field with one rebound.

Celtics: Have won 10 straight at home. ... It was Tatum’s 14th career regular-season game with at least 40 points.