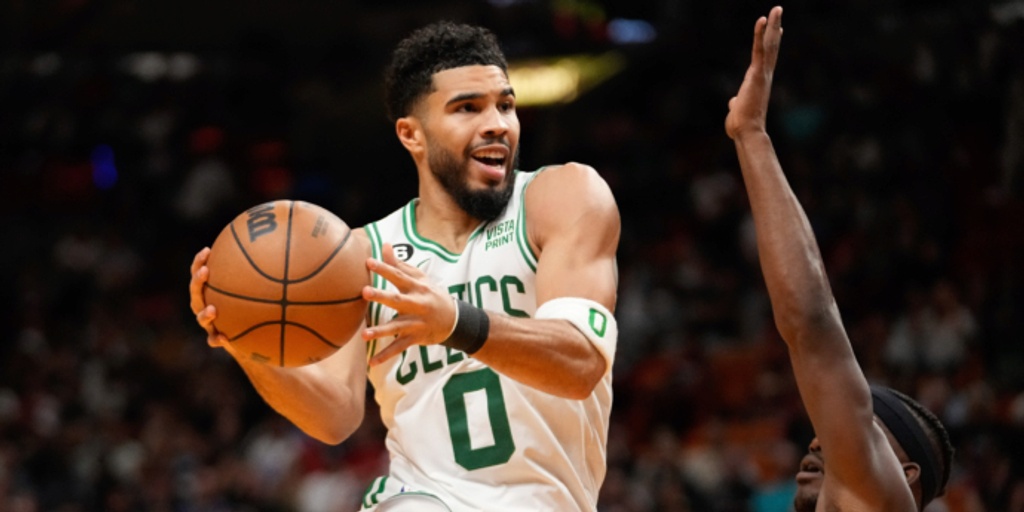 The Celtics — whose most recent trip to Miami was a Game 7 win in that playoff series — outscored Miami 42-24 from 3-point range, and improved to 2-0 under interim coach Joe Mazzulla.

Tyler Herro scored 25 points for Miami, which got 19 from Jimmy Butler, 18 from Bam Adebayo and 17 from Kyle Lowry.

Miami cut a 14-point deficit to five late, before back-to-back paint baskets by Tatum and the Celtics would hold on.

“We've got a great team and we're still trying to figure each other out," Tatum said. “And I love playing against the Heat. We've got some history here the last couple years, and they push you. They make you a better team. They've got a lot of fire, a lot of great players, a great coach."

It's Miami's first 0-2 start since 2007-08 — meaning it's the first in Erik Spoelstra's 15-year run as Heat coach. Miami had been one of only two teams without an 0-2 start in the last 15 seasons; now, Portland is the only team on that list.

Boston led by as many as 11 in the first half, took a 59-51 lead into the break and stretched the lead to 12 when Brown made back-to-back baskets to open the third quarter.

That’s around the time Miami put together perhaps its best stretch of the night. A 20-6 run by the Heat, with Herro and Lowry each scoring six points, gave Miami a 71-69 edge — its first lead since midway through the first quarter.

But when Adebayo got his fourth foul, then a technical, the game changed. He came out, and Boston took off.

The Celtics matched Miami’s 20-6 run with a 20-6 burst of their own, Tatum scoring eight of those points, Grant Williams ending it with a pair of 3’s and it was 89-77 going into the fourth.

Heat: Spoelstra has now faced 104 different coaches in his NBA career, after matching wits with Mazzulla for the first time. ... Victor Oladipo (left knee) missed his second consecutive game. He has not made an October appearance in the NBA since 2018.

The Heat paid tribute to Celtics great Bill Russell throughout the evening, even with staff wearing T-shirts with a large “6” on them -- a nod to Russell’s jersey number, which now is on a banner swaying in Miami’s arena as well. Miami also had a pregame moment of silence for referee Tony Brown, who died Thursday after an 18-month battle with pancreatic cancer.