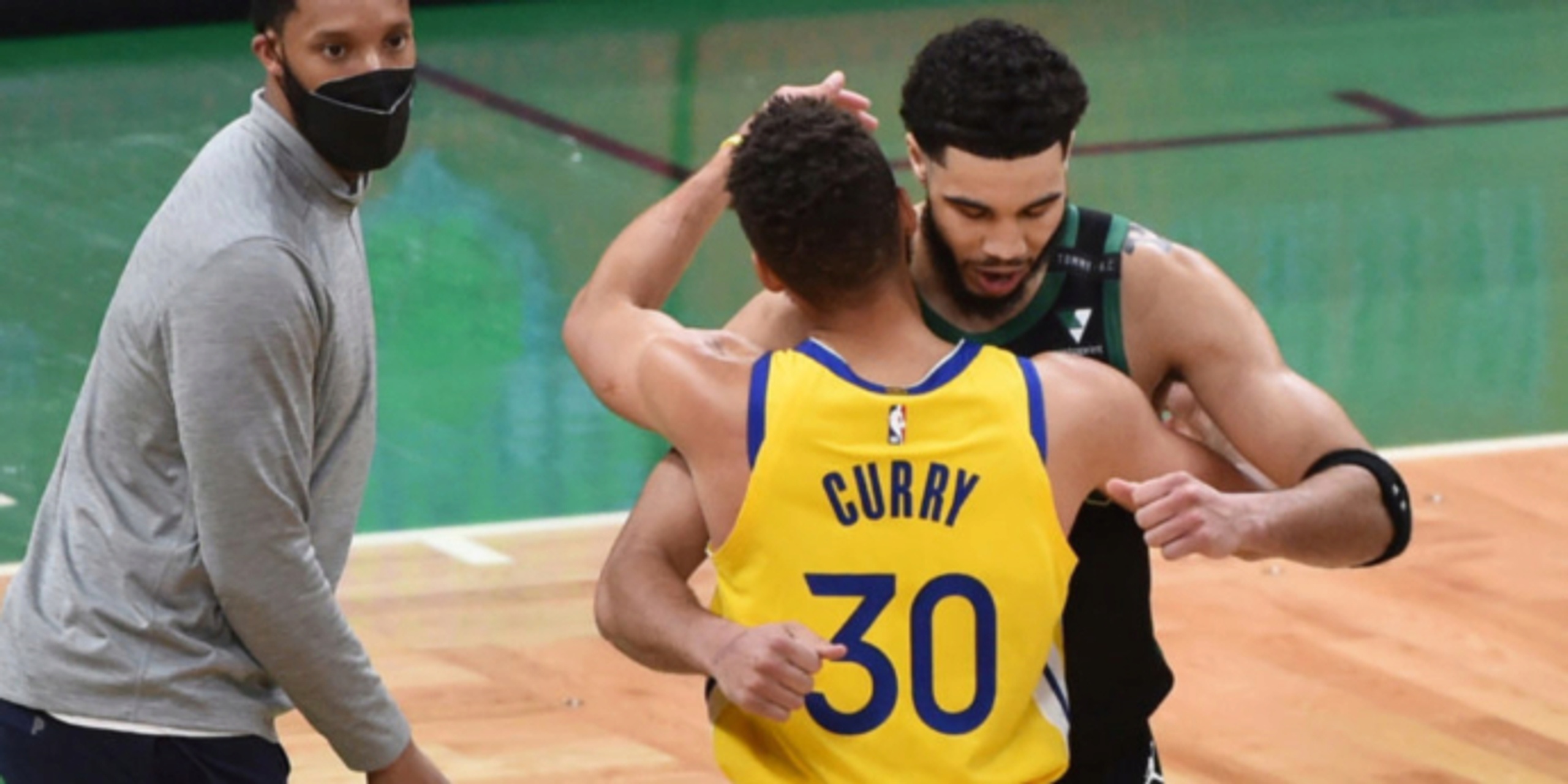 BOSTON (AP) — Jayson Tatum scored 44 points to win a shootout with Stephen Curry, who had 47, and Kemba Walker made a 3-pointer with 24 seconds left to lead the Boston Celtics to their sixth straight win, 119-114 over the Golden State Warriors on Saturday night.

Walker scored 26 points in all, grabbing his eighth rebound after Golden State's last shot and bouncing the ball vigorously in celebration as the clock ran out. The Celtics won for the eighth time in nine games.

Andrew Wiggins scored 22 points and Draymond Green had 10 rebounds for the Warriors, who had won four in a row and led by as many as 16 points in the second quarter before Boston ran off 21 of the next 23 points to take the lead in the third.

Back-to-back 3-pointers from Green and Curry gave the Warriors a 109-103 lead in the final minutes before Walker hit a pair of free throws and Tatum hit a 3-pointer to make it a one-point game. After a few unsuccessful trips up the court, the Celtics worked the ball around to an open Marcus Smart beyond the 3-point line.

He stood there, with no one coming out to cover him, before sinking the shot to give Boston a 111-109 lead. Kevon Looney made a putback to tie it before Tatum drove to give the Celtics the lead for good with 48 seconds left.

Curry made a corner 3 to make it 116-114 before Tatum sank two free throws with 14 seconds left to clinch it.

Curry put a scare into even the opposing crowd when he buckled to the court with 7 minutes left in the game, apparently with a turned ankle. He remained hunched over the ball until Tatum tied it up and forced a jump; Curry then got up and limped around in a circle before nodding his head to say he was OK.

About 90 seconds later, Juan Toscano-Anderson went over the scorer's table to save a loose ball; even as the officials nearby waved frantically for help, Curry wound up with it and hit a 3-pointer that gave the Warriors a 103-101 lead.

After a whistle, Toscano-Anderson was helped back up. He left the court holding a towel to the right side of his head and did not return to the game.

Warriors: Curry had 22 in the first half and 16 in the third quarter. ... F Kelly Oubre missed his fifth straight game. He is day-to-day with a wrist injury.

Celtics: Jabari Parker made his Celtics debut. ... Tatum scored 23 in the first half on 9-for-12 shooting. ... Jaylen Brown missed the game with a non-COVID illness.

Curry had eight straight Warriors points — including a desperation lefty hook shot with one foot on the 3-point line, while drawing a foul — to help them open a 66-50 lead with just under 2 minutes remaining in the second quarter.

But the Celtics scored the last 10 points of the half and continued with an 11-2 run to start the third quarter and open a 71-68 lead. Boston led 78-71 before Golden State ran off nine straight points, getting back-to-back 30-footers from Curry to take back the lead.

Celtics: Host the Bulls on Monday.