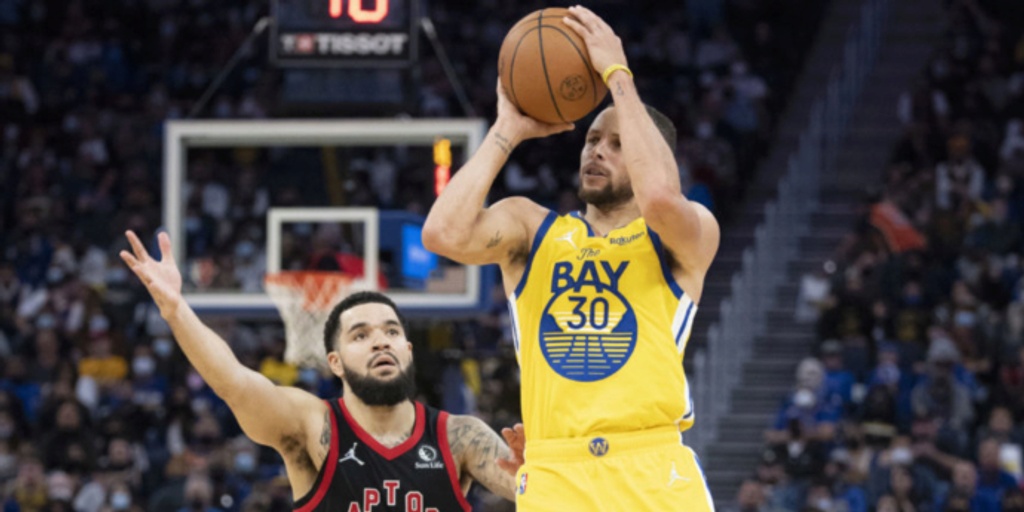 Ray Allen fondly remembers when a young Stephen Curry and his little brother, Seth, used to tag along with father Dell and take part in Bucks shootarounds.

“They’d come and we’d go through drills and they’d be right there with us, and they’d hold their own,” said Allen, a teammate of Dell Curry in Milwaukee at the time who considered Dell the best shooter he had been around so far as a third-year guard. That was years before Allen would make his own enduring mark as a shooter.

Now, Stephen Curry is that guy for Golden State — and the two-time MVP is on the brink of breaking Allen's career three-point record. His next chance comes Saturday night at Philadelphia, where the Warriors (21-4) are embarking on a five-game road trip.

Seth Curry will be on the other side with the Sixers, determined to hold his brother in check.

The Warriors star needs nine three-pointers to match Allen's record of 2,973 regular-season 3s and 10 to top him. Allen accomplished the feat over 18 seasons from 1996-2014.

“His journey was interesting because he was such an athlete," Curry said. "He’d dunk on you, he’d drive, he could shoot the 3 but from what I remember it wasn’t a huge part of his game, because he could do so many other things. As it evolved, he adapted and made it more of a feature.”

Curry called Allen’s work ethic “a common theme” for the two shooting stars, recalling how Allen arrived at the arena three hours before games to shoot when nobody was inside to watch. That’s a stark difference from the pregame show Curry puts on for the masses night after night, thousands holding up their phones to shoot video and capture a glimpse of one of the greatest NBA performers ever.

“He had a very specific routine that he stuck to,” Curry said. “I learned a lot from that.”

At 33, reigning NBA scoring champion Curry continues to let it fly from every spot on the court, recently knocking down half-court shots in consecutive games.

“I work hard to try to put myself in position to have success, and confidence in my game and how I play, and all that goes into it,” Curry said. “With that confidence does come creativity and ability to go out and stretch your imagination for what’s possible out there and honestly, I just love what I do. So, there’s always joy that comes with it.”

Curry went a quiet 6 of 17 from beyond the arc in Wednesday's 104-94 win against Portland. Some thought he might somehow break the record against the Trail Blazers.

While he would have preferred to become the three-point leader in front of the raucous home crowd, Curry acknowledged: "It is the weirdest thing to be picky about breaking a record like that. ... I feel like it will be special no matter what because I’ll make it special and it will be an amazing experience for me and my teammates.”

Portland coach Chauncey Billups realizes what this record means to the way basketball is played today and going forward.

“The game has changed a ton. Quite frankly, he’s the reason why,” Billups said. “He’s one of the most influential players to ever play the game, the way he’s changed the way everybody kind of plays the game.”

Curry's teammates can't wait to share in his moment, with Andrew Wiggins saying: "He’s one of the most influential basketball players of all time, helped change the game. So no one deserves it more than him.”

Allen will also appreciate Curry’s latest accomplishment on an already long list of them.

“It's been fascinating to watch. It only seems fitting that this is the path that Steph is on," said Allen, now 46. "People have compared him to myself and Reggie (Miller) and other past shooters. He really operates in a lane of his own.”

These days, Allen and Curry enjoy meeting up a couple of times a year to play golf, and they will surely have plenty to chat about next time.

“I just like the fact that he complimented my golf game more than basketball,” Curry said with a grin. “Basketball’s cool, everybody talks about that. The fact that I can beat him at golf, that’s even better.”