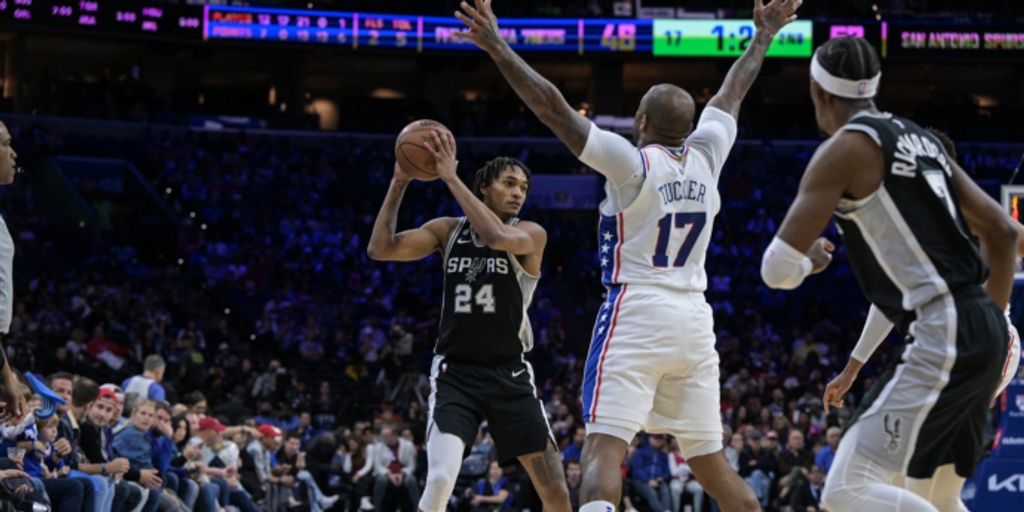 PHILADELPHIA (AP) — Doug McDermott hit four 3-pointers and scored all 14 of his points in the second half and the San Antonio Spurs beat Philadelphia 114-105 on Sunday night to send the 76ers to their third straight loss to open the season.

“We are learning that we can play with anyone,” McDermott said. “We had a good win last night (against Indiana) and we didn't get complacent. We came out and competed against a really good team.”

“We worked real hard,” Spurs coach Gregg Popovich said. “The quick turnaround is not what any of us love, but we all have them. What it showed me was they are serious about getting better and knowing what the league is like. I thought that was pretty impressive.”

“Defensively, we have to connect better,” Embiid said. “We're not guarding the ball well. We need to work on that. It's a fairly new team and it's going to take time to get everyone on the same page. But we'll be fine.”

San Antonio (2-1) was more efficient defensively than in either of its first two games, where it yielded 131.5 points on average. The Spurs forced the 76ers into 12 turnovers and limited the second-chance points to 14.

The Spurs were effective in limiting good looks for Harden, who had averaged 33 points and shot over 54% in each of the first two games. Harden was 4 for 17 from the field, going 1 of 5 from 3-point range.

“We didn't execute our offense well in the final four minutes and down the stretch,” Popovich said. “But we played hard on defense, we executed and we played with a lot of grunt. I think that's what got us through.”

McDermott's shots off the bench came at crucial moments, including eight straight midway through the fourth quarter after Philadelphia had erased a 10-point deficit and grabbed a lead.

“My role is to come in and provide a spark and make those shots,” McDermott said. “Either I come in and do that or run around and allow guys to get free for shots. That's what the coaches tell me to do. So, if I can do that, I'm going to. And we needed that tonight."

76ers: Embiid confirmed a report that he suffered from plantar fasciitis over the summer which has impacted his conditioning early on. “I'm still trying to work my way back,” Embiid said. “It slowed me down. Hopefully, everything will be back to normal.” Through three games, Embiid has a combined minus-17 (5.3 average). In 2021-22, he was a plus-5.4 per game.

Saturday night marked the first return to Philadelphia for Spurs assistant coach Brett Brown, who coached the 76ers from 2014 to 2020d. The club honored him with a video tribute during a first quarter timeout, which received a mix of cheers and boos. Brown returned to the San Antonio coaching staff this year after taking two years off.

Spurs: At Minnesota on Monday and Wednesday nights.