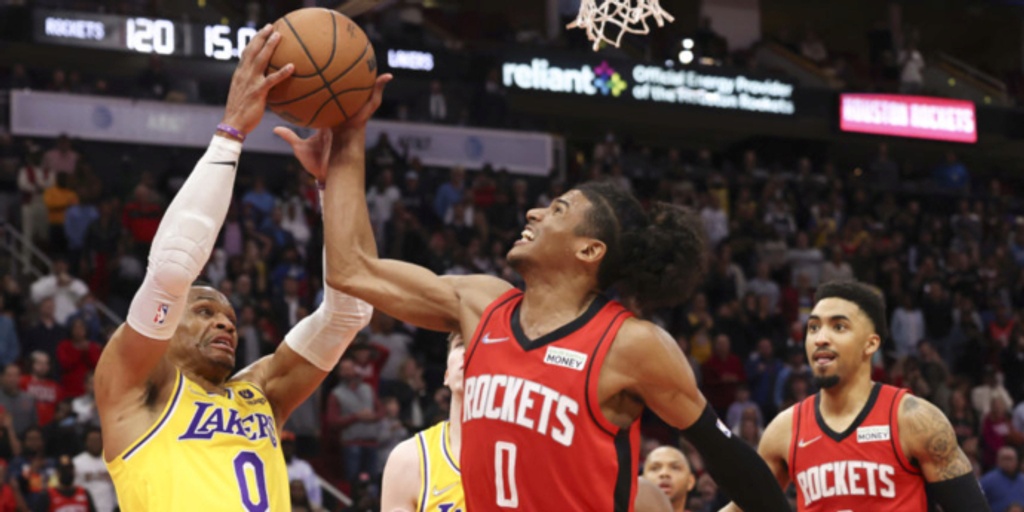 “That was so much fun and exciting and great for a packed house to see us play like that,” coach Stephen Silas said. “And also great for our team to respond to the adversity, get down and come back out fighting."

The Rockets, who have the worst record in the Western Conference, withstood a triple-double from LeBron James and 30 points from Russell Westbrook to get just their second win in 15 games.

“We have a really small margin of error this season and teams are making us pay," James said.

The loss is the ninth straight on the road for the Lakers, who have dropped six of their last seven games and are running out of time to get things together before the playoffs begin.

“It is hard losing when you’re pouring everything you have into it and trying to get traction for this group," coach Frank Vogel said. “But we’ve got resolve and this is a tough stretch we have to fight through."

Green, the second overall pick in the draft, opened overtime with a layup before adding a 3-pointer and then swishing a hook shot soon after that to make it 127-120. Eric Gordon added a 3-pointer to push the lead to 10 before the Lakers finally scored in the extra period on a basket by Westbrook with 2 1/2 minutes to go.

But the Rockets used a 6-3 run with 3s from Kenyon Martin Jr. and Green around a 3 from James to extend the lead to 136-125 with a minute left in OT and seal the victory.

“We had too many defensive breakdowns throughout the game," Vogel said. “Our guys fought but it just wasn’t enough."

Green was asked about his big night.

“It felt good," he said. “They kept feeding me. Told me to keep attacking until they stop me. So that’s what I did. The basket felt super big tonight.”

James had 23 points, 14 rebounds and a season-high 12 assists for his fifth triple-double of the season. But his career-long streak of consecutive games with 25 points ended at 23 games on a night he was 9 of 26 overall and made just 1 of 9 3-pointers.

“I missed a lot of shots that I know I’m capable of making, have made throughout the course of the season and my career," he said. “Shots just weren’t falling for me tonight."

It was his first game since scoring a season-high 56 points Saturday night after he sat out Monday at San Antonio with a sore left knee.

Rookie Alperen Sengun set career-highs with 21 points and 15 rebounds and fellow rookie Josh Christopher added 21 points off the bench to help the Rockets to the win.

Silas spoke of growth of Green and Christopher, who are 20 years old, and the 19-year-old Sengun after their performances Wednesday night.

“It means a lot," he said. “It means that they’re learning the importance of the work and sticking with it and fighting through the hard times and finding success at the end of the rainbow when the lights are the brightest."

A jump shot by Westbrook tied it at 120-all with a minute to go but he missed a shot a few seconds later to give Houston the ball back.

Green missed a layup under heavy pressure from James to give the Lakers another shot to take the lead.

James missed an off-balance shot in the lane with 17 seconds left but officials ruled that Houston knocked the ball out of bounds while vying for the rebound. The Rockets challenged the call, but it was upheld.

James drove into the lane and dished to Carmelo Anthony in the corner for the final shot of regulation, but his 3-point attempt was off to send it to OT.

A 5-2 spurt by the Rockets in the fourth tied it up, but James drove into the lane and finished with a monster, one-handed dunk to put the Lakers up 113-111 with 5 ½ minutes to go.

Los Angeles trailed by 1 with about three minutes left when James made 1 of 2 free throws to make it 118-116.

Green scored four quick points to give the Rockets a 120-118 lead with about two minutes left. He made two free throws and then grabbed a rebound on the other end and finished with a jumper to put Houston on top.

Rockets: Jae’Sean Tate sat out with a sore left ankle. ... Dennis Schroder returned after missing four games with a sprained right ankle and had 12 points.

Anthony on how well the Rockets played Wednesday night: “It is surprising that we were in a game that close and that tight. But that says something about the Rockets. They don’t quit coming at you."